From Infogalactic: the planetary knowledge core
Jump to: navigation, search
For other uses, see Prediction (disambiguation).

The Old Farmer's Almanac is famous in the US for its (not necessarily accurate) long-range weather predictions.

A prediction (Latin præ-, "before," and dicere, "to say"), or forecast, is a statement about an uncertain event. It is often, but not always, based upon experience or knowledge. There is no universal agreement about the exact difference between the two terms; different authors and disciplines ascribe different connotations.

Although guaranteed accurate information about the future is in many cases impossible, prediction can be useful to assist in making plans about possible developments; Howard H. Stevenson writes that prediction in business "... is at least two things: Important and hard."[1]

Outside the rigorous context of science, the term "prediction" is often used to refer to an informed guess or opinion. A prediction of this kind might be inductively valid if the predictor is a knowledgeable person in the field and is employing sound reasoning and accurate data.[2] Large corporations invest heavily in this kind of activity to help focus attention on possible events, risks and business opportunities, using futurists. Such work brings together all available past and current data, as a basis to develop reasonable expectations about the future.

In statistics, prediction is a part of statistical inference. One particular approach to such inference is known as predictive inference, but the prediction can be undertaken within any of the several approaches to statistical inference. Indeed, one description of statistics is that it provides a means of transferring knowledge about a sample of a population to the whole population, and to other related populations, which is not necessarily the same as prediction over time. When information is transferred across time, often to specific points in time, the process is known as forecasting.[3]

Statistical techniques used for prediction include regression analysis and time series analysis, and their various sub-categories such as ordinary least squares, logistic regression, autoregressive moving average models, and vector autoregression models. When these and/or a related, generalized set of regression or machine learning methods are deployed in commercial usage, the field is known as predictive analytics.[4]

In many applications, such as time series analysis, it is possible to estimate the models that generate the observations. If models can be expressed as transfer functions or in terms of state-space parameters then smoothed, filtered and predicted data estimates can be calculated.[5] If the underlying generating models are linear then a minimum-variance Kalman filter and a minimum-variance smoother may be used to recover data of interest from noisy measurements. These techniques rely on one-step-ahead predictors (which minimise the variance of the prediction error). When the generating models are nonlinear then stepwise linearizations may be applied within Extended Kalman Filter and smoother recursions. However, in nonlinear cases, optimum minimum-variance performance guarantees no longer apply.[6] 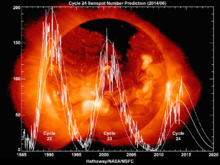 NASA's 2004 predictions of the solar cycle, which were inaccurate (predicting that solar cycle 24 would start in 2007 and be larger than cycle 23), and the refined predictions in 2012, showing it started in 2010 and is very small.

In science, a prediction is a rigorous, often quantitative, statement, forecasting what will happen under specific conditions; for example, if an apple falls from a tree it will be attracted towards the center of the earth by gravity with a specified and constant acceleration. The scientific method is built on testing statements that are logical consequences of scientific theories. This is done through repeatable experiments or observational studies.

Mathematical equations and models, and computer models, are frequently used to describe the past and future behaviour of a process within the boundaries of that model. In some cases the probability of an outcome, rather than a specific outcome, can be predicted, for example in much of quantum physics.

In microprocessors, branch prediction permits avoidance of pipeline emptying at branch instructions. In engineering, possible failure modes are predicted and avoided by correcting the mechanism causing the failure.

Accurate prediction and forecasting are very difficult in some areas, such as natural disasters, pandemics, demography, population dynamics and meteorology. For example, it is possible to predict the occurrence of solar cycles, but their exact timing and magnitude is much more difficult (see picture to right).

Albert Einstein's theory of general relativity could not easily be tested as it did not produce any effects observable on a terrestrial scale. However, the theory predicted that large masses such as stars would bend light, in contradiction to accepted theory; this was observed in a 1919 eclipse.

Mathematical models of stock market behaviour (and economic behaviour in general) are also unreliable in predicting future behaviour. Among other reasons, this is because economic events may span several years, and the world is changing over a similar time frame, thus invalidating the relevance of past observations to the present. Thus there are an extremely small number (of the order of 1) of relevant past data points from which to project the future. In addition, it is generally believed that stock market prices already take into account all the information available to predict the future, and subsequent movements must therefore be the result of unforeseen events. Consequently, it is extremely difficult for a stock investor to anticipate or predict a stock market boom, or a stock market crash. In contrast to predicting the actual stock return, forecasting of broad economic trends tends to have better accuracy. Such analysis is provided by both non-profit groups as well as by for-profit private institutions (including brokerage houses[8] and consulting companies[9]).

An actuary uses actuarial science to assess and predict future business risk, such that the risk(s) can be mitigated. For example, in insurance an actuary would use a life table (which incorporates the historical experience of mortality rates and sometimes an estimate of future trends) to project life expectancy.

Predicting the outcome of sporting events is a business which has grown in popularity in recent years. Handicappers predict the outcome of games using a variety of mathematical formulas, simulation models or qualitative analysis. Early, well known sports bettors, such as Jimmy the Greek, were believed to have access to information that gave them an edge. Information ranged from personal issues, such as gambling or drinking to undisclosed injuries; anything that may affect the performance of a player on the field.

Recent times have changed the way sports are predicted. Predictions now typically consist of two distinct approaches: Situational plays and statistical based models. Situational plays are much more difficult to measure because they usually involve the motivation of a team. Dan Gordon, noted handicapper, wrote “Without an emotional edge in a game in addition to value in a line, I won’t put my money on it”.[10] These types of plays consist of: Betting on the home underdog, betting against Monday Night winners if they are a favorite next week, betting the underdog in “look ahead” games etc. As situational plays become more widely known they become less useful because they will impact the way the line is set.

The widespread use of technology has brought with it more modern sports betting systems. These systems are typically algorithms and simulation models based on regression analysis. Jeff Sagarin, a sports statistician, has brought attention to sports by having the results of his models published in USA Today. He is currently paid as a consultant by the Dallas Mavericks for his advice on lineups and the use of his Winval system, which evaluates free agents. Brian Burke, a former Navy fighter pilot turned sports statistician, has published his results of using regression analysis to predict the outcome of NFL games.[11] Ken Pomeroy is widely accepted as a leading authority on college basketball statistics. His website includes his College Basketball Ratings, a tempo based statistics system. Some statisticians have become very famous for having successful prediction systems. Dare wrote “the effective odds for sports betting and horse racing are a direct result of human decisions and can therefore potentially exhibit consistent error”.[12] Unlike other games offered in a casino, prediction in sporting events can be both logical and consistent.

Other more advance models include those based on Bayesian networks, which are causal probabilistic models commonly used for risk analysis and decision support. Based on this kind of mathematical modelling, Constantinou et al.,[13][14] have developed models for predicting the outcome of association football matches. What makes these models interesting is that, apart from taking into consideration relevant historical data, they also incorporate all these vague subjective factors, like availability of key players, team fatigue, team motivation and so on. They provide the user with the ability to include their best guesses about things that there are no hard facts available. This additional information is then combined with historical facts to provide a revised prediction for future match outcomes. The initial results based on these modelling practices are encouraging since they have demonstrated consistent profitability against published market odds.

Nowadays sport betting is a huge business; there are many websites (systems) alongside betting sites, which give tips or predictions for future games. Some of these prediction websites (tipsters) are based on human predictions, but others on computer software sometimes called prediction robots or bots. Prediction bots can use different amount of data and algorithms and because of that their accuracy may vary.

In politics it is common to attempt to predict the outcome of elections via political forecasting techniques (or assess the popularity of politicians) through the use of opinion polls. Prediction games have been used by many corporations and governments to learn about the most likely outcome of future events.

Predictions have often been made, from antiquity until the present, by using paranormal or supernatural means such as prophecy or by observing omens. Methods including water divining, astrology, numerology, fortune telling, interpretation of dreams, and many other forms of divination, have been used for millennia to attempt to predict the future. These means of prediction have not been proven by scientific experiments.

In literature, vision and prophecy are literary devices used to present a possible timeline of future events. They can be distinguished by vision referring to what an individual sees happen. The New Testament book of Revelation (Bible) thus uses vision as a literary device in this regard. It is also prophecy or prophetic literature when it is related by an individual in a sermon or other public forum.

Divination is the attempt to gain insight into a question or situation by way of an occultic standardized process or ritual.[15] It is an integral part of witchcraft and has been used in various forms for thousands of years. Diviners ascertain their interpretations of how a querent should proceed by reading signs, events, or omens, or through alleged contact with a supernatural agency, most often describe as an angel or a god though viewed by Christians and Jews as a fallen angel or demon.[16]