Predictions made by Ray Kurzweil

From Infogalactic: the planetary knowledge core
(Redirected from Predictions made by Raymond Kurzweil)
Jump to: navigation, search 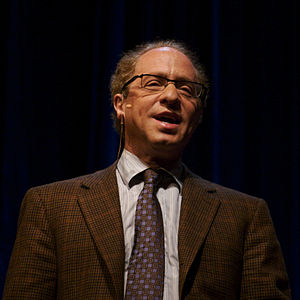 American author, inventor and futurist Raymond Kurzweil has become well known for his predictions about artificial intelligence and the human race. His first book, The Age of Intelligent Machines, published in 1990, put forth his theories on the results of the increasing use of technology and predicted the explosive growth in the internet, among other predictions. Later works, 1999's The Age of Spiritual Machines and 2005's The Singularity is Near outlined other theories including the rise of clouds of nano-robots (nanobots) called foglets and the development of Human Body 2.0 and 3.0, whereby nanotechnology is incorporated into many internal organs.

The Age of Intelligent Machines

Kurzweil wrote his first book, The Age of Intelligent Machines, between 1986 and 1989.[citation needed] When published in 1990 it forecast the demise of the Soviet Union due to new technologies such as cellular phones and fax machines disempowering authoritarian governments by removing state control over the flow of information.[1] In 2005, Mikhail Gorbachev told Kurzweil that emerging decentralized electronic communication "was a big factor" for fostering democracy in the Soviet Union.[2]

Kurzweil extrapolated the performance of chess software to predict that computers would beat the best human players "by the year 2000".[3] In May 1997 chess World Champion Garry Kasparov was defeated by IBM's Deep Blue computer in a well-publicized chess tournament.[4]

Perhaps most significantly, Kurzweil foresaw the explosive growth in worldwide Internet use that began in the 1990s.[5] At the time of the publication of The Age of Intelligent Machines, there were only 2.6 million Internet users in the world,[6] and the medium was often unreliable outside academic, military, corporate and other heavily invested settings, difficult for non-technical users to use, and mostly lacking a broad range of content. He also stated that the Internet would explode not only in the number of users but in content as well, eventually granting users access "to international networks of libraries, data bases, and information services".[this quote needs a citation] Additionally, Kurzweil correctly foresaw that the preferred mode of Internet access would inevitably be through wireless systems, and he was also correct to estimate that the latter would become practical for widespread use in the early 21st century.[citation needed]

The Age of Spiritual Machines

In 1999, Kurzweil published a second book titled The Age of Spiritual Machines, which goes into more depth explaining his futurist ideas. The third and final section of the book is devoted to elucidating the specific course of technological advancements Kurzweil believes the world will experience over the next century. Titled "To Face the Future", the section is divided into four chapters respectively named "2009", "2019", "2029", and "2099". For every chapter, Kurzweil issues predictions about what life and technology will be like in that year.

Kurzweil restated his earlier prediction from The Age of Intelligent Machines regarding the advent of pocket-sized, cheap, text-to-speech converters for the blind by 2009. The "Kurzweil-National Federation of the Blind Reader" (K-NFB Reader) was introduced in 2005 at a price of $3,495. The device was portable, but not the cheap, pocket-sized device of the prediction.[7] By 2008, a software version for the (pocket-sized) Nokia N82 cell phone was available for $1,595.[8] A version for iOS smartphones was released for $99 in 2014.

The Singularity Is Near

While this book focuses on the future of technology and the human race as The Age of Intelligent Machines and The Age of Spiritual Machines did, Kurzweil makes very few concrete, short-term predictions in The Singularity Is Near, though longer-term visions abound.

Kurzweil predicted that, in 2005, supercomputers with the computational capacities to simulate protein folding will be introduced. In 2010, a supercomputer simulated protein folding for a very small protein at an atomic level over a period of a millisecond. The protein folded and unfolded, with the results closely matching experimental data.[9] The biyearly protein structure prediction contest CASP shows that the current algorithms for structure prediction are still impractical for determining the previously unknown structure of most proteins.[citation needed]

In an October 2002 article published on his website, Kurzweil stated that "Deep Fritz-like chess programs running on ordinary personal computers will routinely defeat all humans later in this decade."[10] Deep Fritz is a computer chess program—generally considered superior to the older Deep Blue — that has defeated or tied a number of human chess masters and opposing chess programs.[11] Due to advances in personal computer performance, the Deep Fritz program can now run on ordinary personal computers, and different versions of it are available for purchase.[12][13] In September 2002, Chessmaster 9000, a widely available chess playing game from Ubisoft, defeated the then U.S. Chess Champion and International Grandmaster Larry Christiansen in a four-game match.[14] In 2006 reigning World Champion Vladimir Kramnik was defeated 4:2 by Deep Fritz, running on a multiprocessor personal computer.[15]

According to Ray Kurzweil, 89 out of 108 predictions he made were entirely correct by the end of 2009. An additional 13 were what he calls “essentially correct" (meaning that they were likely to be realized within a few years of 2009), for a total of 102 out of 108. Another 3 are partially correct, 2 look like they are about 10 years off, and 1, which was tongue in cheek anyway, was just wrong.[16] Kurzweil later released a more detailed analysis of the accuracy of his predictions up to 2009, arguing that most were correct.[17]

The Age of Intelligent Machines (1990)

Note: Since the "Early 2000s" and "Early 21st century" predictions are both listed before the "2010" predictions in the technology Chronology, it can be assumed that the timeframe for the first two is 2000–2010.

Kurzweil has even wagered that his predictions will be true, on the site Long Bets Betting against Mitchell Kapor, founder of Lotus Software Corporation for a payout of $20,000, or $10,000 each.

Thousands of years from now

Some indeterminate points within a few decades from now

Kurzweil said in a 2006 C-SPAN2 interview that "nanotechnology-based" flying cars would be available in 20 years.[18]

Kurzweil has said that by 2014, humanity will reach a "tipping point" where the cost-per-watt from solar energy is cheaper than from coal and oil: By capturing only 0.03 percent of the sun's energy that falls on Earth, humanity could meet virtually all of its projected energy needs up to 2030[19] (thirty trillion watts); this will be capable through with extremely inexpensive, lightweight, and efficient nano-engineered solar panels together with nano-fuel cells to store and distribute the captured energy. Kurzweil believes, by the end of the 2020s, humans will be able to completely replace fossil fuels.

Kurzweil said the following in a November 2007 Computerworld interview:

In the cover article of the December 2010 issue of IEEE Spectrum, John Rennie criticized Kurzweil's predictions: "On close examination, his clearest and most successful predictions often lack originality or profundity. And most of his predictions come with so many loopholes that they border on the unfalsifiable."[23] The Brain Makers, a history of artificial intelligence written in 1994 by HP Newquist, noted that "Born with the same gift for self-promotion that was a character trait of people like P.T. Barnum and Ed Feigenbaum, Kurzweil had no problems talking up his technical prowess . . . Ray Kurzweil was not noted for his understatement." [24]