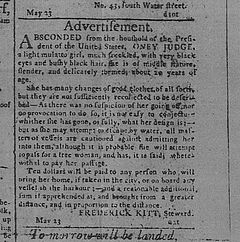 1796 Runaway Ad for Oney Judge, one of 9 enslaved Africans held by Washington at the Philadelphia President's House.

The three-and-a-half-story brick mansion on the south side of Market Street was built in 1767 by widow Mary Lawrence Masters.[1] In 1772, she gave it as a wedding gift to her elder daughter, who married Richard Penn, the lieutenant-governor of the Colony and a grandson of William Penn. The Penns and the Masterses moved to England during the early days of the American Revolutionary War.

During the British occupation of Philadelphia, September 1777 to June 1778, the house was headquarters for General Sir William Howe. Following the British evacuation, it housed the American military governor, Benedict Arnold, and it was here that he began his treason. After Arnold left Philadelphia, the next resident was John Holker. Holker was a purchasing agent for the French, who were American allies at the time. Under his care the house suffered a fire, and was sold to a man whom Holker knew well, Robert Morris.

In 1781, it was purchased, refurbished, and expanded by Robert Morris, who lived here while Superintendent of Finance. Washington lodged here with Morris during the 1787 Constitutional Convention. In 1790, Morris gave up the house for his friend to use as the Executive Mansion, moving to the house next door. President Washington occupied it from November 1790 to March 1797, and President Adams from March 1797 to May 1800. Adams oversaw the transfer of the federal government to the District of Columbia, and first occupied the White House on November 1, 1800.

The main house was demolished in 1832, although the four-story east and west walls survived as party walls shared with the adjoining buildings. These, along with surviving sections of the backbuildings, were demolished in the 1950s during the creation of Independence Mall. A public toilet was built on the site.

In late 2000, during excavation for the new Liberty Bell Center, foundations of the President's House were uncovered.[1][2] Intense interest arose in the project, especially after it was revealed that the center's planned main entrance would be just feet from the site of Washington's slave quarters.[3] Although initially reluctant, Independence National Historical Park finally expanded its interpretation at the center to include more about slavery, including material about the nine enslaved African Americans—Moll, Christopher Sheels, Hercules, his son Richmond, Oney Judge, her brother Austin, Giles, Paris, and Joe—who had worked at the President's House.

It undertook a public archaeology project in 2007 that uncovered foundations of the backbuildings, the President's office, and the massive Bow Window designed by Washington as a ceremonial space. It commissioned a memorial at the site, which opened in 2010 to mark the site of the President's House, as well as to acknowledge the slaves and their place in Philadelphia and United States history, with material about the black community in the city. 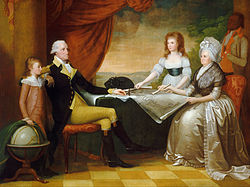 Washington had a household staff of about 24, plus an office staff of 4 or 5, all of whom lived and worked in the house. His wife Martha and two of her grandchildren, "Wash" Custis and Nelly Custis, were part of the First Family. The house was too small for the 30-plus occupants, so the President made additions:

"...a large two-story bow to be added to south side of the main house making the rooms at the rear thirty-four feet in length, a long one-story servants' hall to be built on the east side of the kitchen ell, the bathtubs to be removed from the bath house's second floor and the bathingroom turned into the President's private office, additional servant rooms to be constructed, and an expansion of the stables."[1]

Although Pennsylvania had begun an abolition of slavery in 1780, it permitted slaveholders from other states to hold slaves in the state for up to six months. After that time, slaves would gain their freedom. Members of Congress were exempt from Pennsylvania's Gradual Abolition Act, but not officers of the executive and judicial branches. Washington and other slaveholders rotated their slaves out of the state to prevent the slaves from establishing the 6-month residency needed to qualify for manumission. His slave Oney Judge escaped from captivity in Philadelphia, and he gradually replaced most of his slaves in Philadelphia with indentured servants who were German immigrants.[1] Hercules, a cook who had worked in Philadelphia, escaped from Mount Vernon on February 22, 1797 and made his way to Philadelphia; later he lived in New York City.[4] He was listed among the slaves Washington owned and freed in his will of 1801; the fugitive Hercules may never have learned that he was legally free.

Excavation in 2000 associated with the new Liberty Bell Center uncovered foundations of the ice house.[5] In 2002, it was publicized that Washington had kept nine slaves at the house, and that the LBC's entrance was to be five feet from the former slave quarters.[6] As news spread of the discovery, scholars such as the historian Gary Nash, members of the African-American community, and activists and interest groups in Philadelphia began to push for recognition of Washington's slaves and slavery in US history in exhibits at the new center.

As a result of public interest and concerns, the National Park Service expanded its education programs related to the site and committed to incorporating more material on Washington's slaves and slavery in US history into the Liberty Bell Center. In 2002, after an article documented that Washington had held slaves at his house, the National Park Service received a petition signed by 15,000 people urging it to build a memorial to the President's House and Washington's slaves.[7] The Philadelphia Inquirer started carrying regular stories about the site and stakeholders in April 2002 and continued until the Liberty Bell Center opened in October 2003.[8] In the spring of 2002, the activist group Avenging the Ancestors,[9] was formed under the leadership of Michael Coard.[8]

By 2003, the National Park Service was doing more consultation with the African-American community. It incorporated exhibits at the Liberty Bell Center that told about slavery, and provided ways for the African-American community to participate in decisions about a memorial. A design competition was held in 2005-2006, with participation by stakeholders, to select the design and firm.[10]

In 2007 the National Park Service undertook a public archaeology project to excavate artifacts and assess the findings at the site of the President's House. It attracted 300,000 visitors, as a viewing area was constructed so they could oversee the archaeologists at work. The project stimulated tremendous interest and wide-ranging discussions in the city and region about the role of slavery in its history, as well as national media attention. Due to findings of fragments of an 18th-century building, the memorial had to be redesigned. It was developed as a joint project of the National Park Service and the City of Philadelphia.[11]

Completed in 2010, the memorial, President's House: Freedom and Slavery in the Making of a New Nation, is an open-air pavilion that shows the outline of the original buildings and allows visitors to view the remaining foundations. Some artifacts are displayed within the pavilion. Signage and video exhibits portray the history of the structure, as well as the roles of Washington's slaves in his household and slaves in American society.[11] The memorial was a joint project of the City of Philadelphia and the National Park Service.[12][13]