From Infogalactic: the planetary knowledge core
Jump to: navigation, search
Not to be confused with Prime Minister of Italy.

The President of the Italian Republic (Italian: Presidente della Repubblica Italiana) is the head of state of Italy and, in that role, represents national unity and guarantees that Italian politics comply with the Constitution. The president's term of office lasts for seven years.[2] The 11th President of the Republic, Giorgio Napolitano, was elected on the fourth round of legislative balloting, on 10 May 2006 and elected to a second term on the sixth round with 738 votes, much more than the 504 necessary for a simple majority on 20 April 2013. On 31 January 2015, the incumbent President, former constitutional judge Sergio Mattarella, was elected at the fourth ballot with 665 votes out of 1,009.

The framers of the Constitution of Italy intended for the President to be an elder statesman of some stature. Article 84[2] states that any citizen who is fifty or older on election day and enjoys civil and political rights can be elected President.

Those citizens who already hold any other office are barred from becoming President, unless they resign their previous office once they are elected.

The 1948 Italian Constitution does not have term limits although until 2013 no Italian President of the Republic had run for a second term of office.[3] On 20 April 2013 Giorgio Napolitano, holder of the post since 2006, agreed to run for another term in an attempt to break the parliamentary deadlock in the 2013 presidential elections and was duly re-elected that same day. He made it clear, however, that he would not serve his full term, and retired in January 2015.

The President of the Republic is elected by an electoral college comprising the two chambers of Parliament—the Chamber of Deputies and the Senate—meeting in joint session, combined with 58 special electors appointed from the 20 regions of Italy. Three representatives come from each region, save for the Aosta Valley, which appoints one, so as to guarantee representation for all localities and minorities.

According to the Constitution, the election must be held by a secret ballot, with the 315 Senators, the 630 Deputies and the 58 regional representatives all voting. A two-thirds vote is required to elect on any of the first three rounds of balloting; after that, a simple majority suffices. The election is presided over by the Speaker of the Chamber of Deputies, who calls for the public counting of the votes. The vote is held in the Palazzo Montecitorio, home of the Chamber of Deputies, which is expanded and re-configured for the event.

The President assumes office after having taken an oath before Parliament and delivering a presidential address.

The President’s term lasts seven years; this prevents any President from being reelected by the same Houses, which have a five-year mandate, and grants some freedom from excessive political ties to the appointing body.

The President's term may end by: 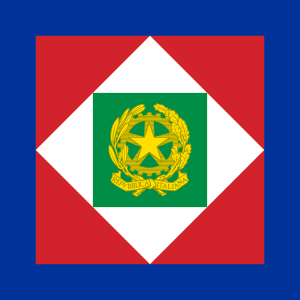 Standard of the President of the Republic.

The Constitution lays out the duties and powers of the President of the Republic, to include:

In practice, the President's office is mostly, though not entirely, ceremonial. The Constitution provides that nearly all presidential acts must be countersigned by a member of the government (either the Prime Minister or an individual minister), as most presidential acts are only formal, and real political responsibility is upon the government. Many of the others are duties that he is required to perform. However, pardons and commutations have been recognised as autonomous powers of the President. 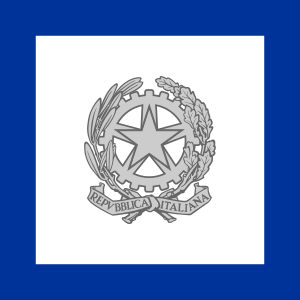 Standard of the Subtitude President of the Republic

According to Article 86[2] of the Constitution, in all the cases in which the President is unable to perform the functions of the Office, these shall be performed by the President of the Senate, who would temporarily serve as Acting President.

The President resides in Rome at the Quirinal Palace, and also has at his disposal the presidential holdings of Castelporziano, near Rome, and Villa Rosebery, in Naples.