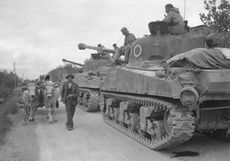 Tanks of the Pretoria Regiment, 1944

On 24 October 1930 it was once again renamed, to The Pretoria Regiment (Princess Alice's Own). The Regiment became fully bilingual with the addition of a 2nd Battalion staffed predominantly by Afrikaners.[2]

During World War II, the Regiment was converted to an armoured formation attached to the 11th South African Armoured Brigade, South African 6th Armoured Division. The unit was demobilized after the war, and in 1946 it was re-organised as a part-time force, consisting of two separate regiment-sized formations. These were re-integrated in 1954.[2]

After the establishment of the Republic of South Africa in 1961, the unit was again renamed The Pretoria Regiment by the South African Defence Force. In the 1960s, recruits were trained on Centurion tanks and the new Eland armoured cars.[2]