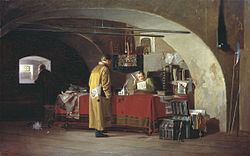 A prikaz in Moscow. Painting by Alexander Yanov

listen)) was an administrative (palace, civil, military, or church), judicial, territorial, and executive offices earlier in Muscovy and Russia of 15th-18th centuries. The term is usually implies "ministry", "office" or "department". In modern Russian "prikaz" literally means an order.

There was a large number (up to 60) of specialized Prikazes. Their set varied over time.

Prikazes appeared from some private orders (Russian: приказ, prikaz) to do something, given by tzar to some persons. At some cases new orders have a name of this person (Order of clerk (dyak) Vakhromeyev, where 'Vakhromeyev' is a last name).

From 1512 word 'Prikaz' is starting to be used as a name of some constant office.

Classification of Prikaz system is very difficult task. In fact, each major historian try to build his own classification. Major variants can be: Prikazes of some territory, of some class of population, of some kind of affairs. Other way of classification - to rank Prikazes by subordination.

The Prikazes were abolished by Peter the Great and replaced, beginning in 1717, with administrative organs known as collegiate. This process took a rather long time; Siberian Prikaz, for example, was restored at 1730 and existed till 1755. At the beginning of 18th century Peter the Great even established some new orders. This system was eliminated finally only at Catherine the Great at 1755. Later Russian historians are describing this, as replacing complicated and chaotic system of several dozens Prikazes to clear and simple system of 12 collegiates.