The Prime Minister of Hungary (Hungarian: miniszterelnök, literally translated as "Minister-President") is the head of government of Hungary, and the most powerful person in Hungarian politics. He or she leads the majority party or coalition in the National Assembly of Hungary, and is also the chairperson of the cabinet. The current Prime Minister is Viktor Orbán, who has served since 29 May 2010.

The title of Hungary's head of government in Hungarian is miniszterelnök. Literally translated, this means "Minister-President". However, since "Prime minister" or "premier" is the more usual title in a parliamentary system for a head of government in English-speaking nations, the title is translated as "Prime Minister" by most English sources.

Election and appointment of the Prime Minister

According to the Hungarian Constitution, the President of Hungary is required to appoint the leader of the political party who wins a majority of seats in the National Assembly of Hungary as Prime Minister. If there is no party with a majority, the President asks the leader of the largest party to attempt to form a government coalition. Therefore, the election of members of a certain party to parliament is the equivalent to a vote for that party's leader for Prime Minister.

There is no limit to the number of mandates as Prime Minister. He/she is appointed by the President of the Republic, after the legislative elections and after an audience with every leader of a party represented at the Assembly. It is usual for the leader of the party which receives a plurality of votes in the elections to be named Prime Minister.

The Prime Minister has a leading role in the executive branch in accordance with the Hungarian Constitution, which is based on the post-World War II Basic Law of the Federal Republic of Germany. Further, the Prime Minister selects Cabinet ministers and has the exclusive right to dismiss them as is the case with the Chancellor of Germany. Cabinet nominees appear before one or more parliamentary committees in consultative open hearings. They must then survive a vote by Parliament and be formally approved by the President.

History of the office 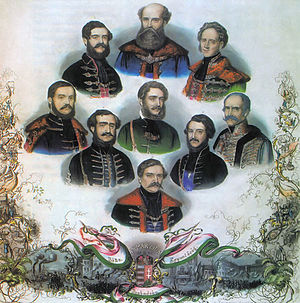 The first government of Hungary

The palatine (Latin: comes palatii, comes palatinus, later palatinus (regni), Hungarian: nádorispán/ nádor, Slovak: nádvorný župan/ nádvorný špán, later: palatín / nádvorník, German: Palatin) was the highest dignitary in the Kingdom of Hungary after the king (a kind of powerful Prime Minister and supreme judge) from the kingdom's rise up to 1848/1918.

Initially, he was in fact the representative of the king, later the vice-regent (viceroy). In the early centuries of the kingdom, he was appointed by the king, later elected by the Diet of the Kingdom of Hungary. After the Habsburgs solidified their hold of Hungary, the dignity became an appointed position once again. Finally, it became hereditary in a cadet (junior) branch of the Habsburg dynasty after King Francis appointed his brother Joseph.

Creation of the position

During the Hungarian Revolution of 1848 the revolutionaries wanted the creation of a Hungarian cabinet which would be independent from the Austrian Empire and the Buda Chancellery (which was office of the Imperial Governor-General). One of the 12 points said: 2. A responsible government in Buda-Pest.

Ferdinand V appointed Count Lajos Batthyány for the position of Prime Minister of Hungary on 17 March 1848. The government was called ministry, differently from the current acceptation. The ministries were called departments. Batthyány resigned on October 2, 1848 he was succeeded by Lajos Kossuth as President of the Committee of National Defence. This executive body has not been allocated the portfolios. In April 1849, when the Hungarians had won many successes, after sounding the army, Kossuth issued the celebrated Hungarian Declaration of Independence. In May Bertalan Szemere was appointed Prime Minister. The position was vacant after the defeat of the freedom fight.