Primorsky Krai (Russian: Примо́рский край; IPA: [prʲɪˈmorskʲɪj kraj]), informally known as Primorye (Примо́рье, IPA: [prʲɪˈmorʲjɪ]), is a federal subject of Russia (a krai). Primorsky means "maritime" in Russian, hence the region is sometimes referred to as Maritime Province or Maritime Territory. Its administrative center is in the city of Vladivostok. The region's population is 1,956,497 (2010 Census).[7] Today, Primorsky Krai has the largest economy in the Russian Far East.[citation needed]

Primorsky Krai, bordered by China, North Korea, and the relatively warm—although freezing in winter—waters of the Sea of Japan, is the southeasternmost region of Russia, located between the 42° and 48° north latitude and 130° and 139° east longitude. It is stretched in the meridianal direction, the distance from its extreme northern point to its most southerly point being about 900 kilometers (560 mi). 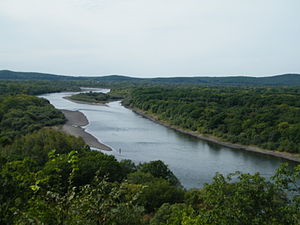 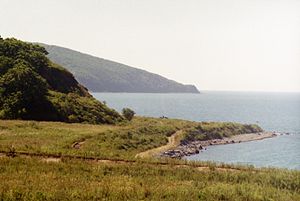 Highlands dominate the territory of the krai. Most of the territory is mountainous, and almost 80% of it is forested. The average elevation is about 500 meters (1,600 ft). Sikhote-Alin is a mountainous formation, extending for the most part of the Krai. It consists of a number of parallel ranges: the Partizansky (Partisan), the Siny (Blue), the Kholodny (Cold), and others. There are many karst caves in the South of Primorye. The relatively accessible Spyashchaya Krasavitsa cave (the Sleeping Beauty) in the Ussuriysky Nature Preserve could be recommended for tourists. There are comparatively well-preserved fragments of the ancient volcanoes in the area.

The ranges are cut by the picturesque narrow and deep valleys of the rivers and by large brooks, such as the Partizanskaya, the Kiyevka, the Zerkalnaya, the Cheryomukhovaya, the Yedinka, the Samarga, the Bikin, and the Bolshaya Ussurka. Most rivers in the Krai have rocky bottoms and limpid water. The largest among them is the Ussuri, with a length of 903 kilometers (561 mi). The head of the Ussuri River originates 20 kilometers (12 mi) to the East of Oblachnaya Mountain. The vast Khanka Lowlands extends into the West and the South-West of Primorye, carpeted by coniferous-deciduous forests. A part of the Lowland surrounding the largest lake in the Russian Far East, Khanka Lake, is occupied by a forest-steppe.

The geographic location of Primorye accounts for the variety of its flora. There are mountainous tundra areas, conifers and coniferous-deciduous forests, and forest-steppe, which is sometimes called the Far Eastern Prairie, where many ancient plant species have been preserved, including ferns, lotus, and the Chosenia willow. 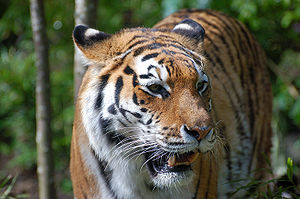 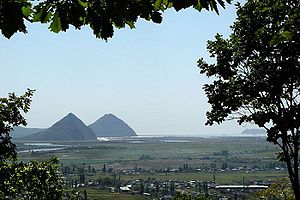 It[clarification needed] had a Buddhism civilization from China of the Jin dynasty.[clarify] The acquisition of Siberia by the Tsardom of Russia and the subsequent Russian expansion to the Far East[clarification needed] brought the Russians into direct contact with the Qing Empire. The Nerchinsk Treaty of 1689 demarcating the borders of the two states gave all lands lying south of the Stanovoy Mountains, including Primorye, to the Qing Empire. However, with the weakening of the Qing Empire[further explanation needed] in the second half of the 19th century, Russia began its expansion into the area. In 1858, the towns of Khabarovsk and Blagoveshchensk were founded. In 1858, Nikolay Muravyov-Amursky signed the Aigun Treaty with China, followed by the Beijing Treaty two years later. As a result of the two treaties, the Sino–Russian border shifted south to the Amur and Ussuri Rivers; granting Russia full control of Primorye.

Primorskaya Oblast was established as the easternmost division of the Russian Empire in 1856. It included the territory of modern Primorsky Krai as well as the territories of modern Khabarovsk Krai and Magadan Oblast, stretching from Vladivostok to the Chukchi Peninsula in the far north.

In the period from 1859 to 1882, ninety-five settlements were established in the Primorye region, including Vladivostok, Ussuriysk, Razdolnoye, Vladimiro-Aleksandrovskoye, Shkotovo, Pokrovka, Tury Rog, and Kamen-Rybolov. The population was primarily engaged in hunting, fishing and cultivation. These activities involved more than two-thirds of the territory's inhabitants. 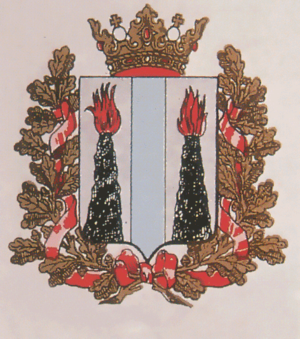 The latter part of the 19th century saw significant economic development in Primorye. Coal mining became a prominent industry as did the export of sea-kale, velvet antlers, timber, crab, dried fish, and trepangs. The rapid economic expansion of Primorye was financed in large measure by Russian and foreign capital investment.

After the Russian Revolution, Primorskaya Oblast was replaced by the Zemstvo of Maritime Territory, and later by Far-Eastern Republic (1920–1922). Within the Russian SFSR, this became Far-Eastern Oblast (1922–1926) and then Far-Eastern Krai (1926–1938).

The area became a battleground for allied and Bolshevik troops in the Siberian Intervention. In 1922, shortly before the end on the Civil War, Primorye came under Bolshevik control, and the economic, scientific, and cultural development of the territory was dictated by the new government. The Soviet Government spent the following ten years combating "bourgeois ideology" in many areas of life and culture. As a result, the music, theater, literature, and the fine arts of Primorye were censored.

The period also saw the beginnings of centralized planning. As in the rest of the Soviet Union, priority was given to heavy industry, with a special emphasis on mining and commercial fishing. Rail and sea transit was greatly expanded, and new port facilities were constructed.

Primorsky Krai was formed by further subdivision of Far-Eastern Krai in 1938, as part of the Stalin-era policy of "unbundling". Primorsky Krai, as defined in 1938, corresponds to the northeastern part of the historical region of Outer Manchuria.

On April 18, 1942, the region became unwillingly involved in World War II as Primorsky Krai became the location of the landing of one of the 16 United States Army Air Corps B-25 Mitchell medium bombers which had been launched from USS Hornet to carry out the famous Doolittle Raid on Japan. Japan and the Soviet Union were not then at war. The landing occurred 40 miles (65 km) west of Vladivostok, the bomber's crew deciding to abort their mission while en route to Tokyo due to excessive fuel consumption.[11]

By the early 1990s, the once-small enterprises had developed into large companies. Some of the most prominent include the DVMP (FESCO) shipping company, the Dalmoreprodukt seafood concern[clarify], Progress Arsenyev Aircraft Works, and Vostok Mining. Commercial fishing plays an important part in the economy of the Primorye and includes firms like Vladivostok Trawling and Refrigerating Fleet (VBTRF), the Active Marine Fisheries Base of Nakhodka, and the Fishing and Marine Transport Fleet of Primorye. Numerous enterprises of the Russian Military Industrial Complex were also established in Primorye. 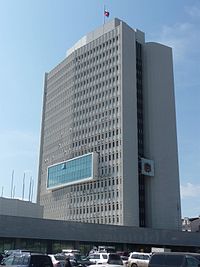 Seat of the Government

During the Soviet period, the high authority in the oblast was shared between three persons: The first secretary of the Primorsky CPSU Committee (who in reality had the biggest authority), the chairman of the oblast Soviet (legislative power), and the Chairman of the oblast Executive Committee (executive power). After 1991, the head of the Oblast administration and eventually the governor was appointed/elected alongside elected regional parliament.

The Charter of Primorsky Krai is the fundamental law of the region. The Legislative Assembly of Primorsky Krai is the province's regional standing legislative (representative) body. The Legislative Assembly exercises its authority by passing laws, resolutions, and other legal acts and by supervising the implementation and observance of the laws and other legal acts passed by it. The highest executive body is the Oblast Government, which includes territorial executive bodies such as district administrations, committees, and commissions that facilitate development and run the day to day matters of the province. The Oblast administration supports the activities of the Governor who is the highest official and acts as guarantor of the observance of the krai Charter in accordance with the Constitution of Russia. 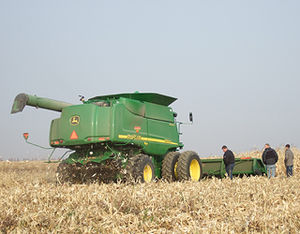 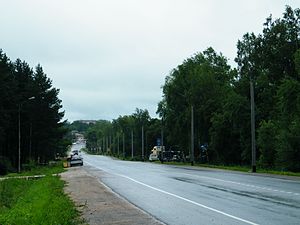 Primorsky Krai's economy, the most balanced in the Russian Far East, is also the largest in absolute terms. Food production is the most important sector, represented mainly by fish processing. Annual catch exceeds two million tonnes, or one half of the Russian Far East total. Second is machine building, where half of the output is geared toward the fishing industry and shipyards. Defense is another important sector, producing naval vessels and military aircraft. The construction materials industry here provides for the whole Russian Far East. Lead smelting is conducted in Rudnaya Pristan on the coast.

The timber industry, though in recession, is still second only to Khabarovsk Krai's with an annual yield of about 3 million cubic meters of timber. Primorsky Krai is the largest coal producer in the Russian Far East and generates more electricity than any other Russian Far East administrative division, but power shortages are common. Agriculture is also important; the krai produces rice, milk, eggs, and vegetables.

Primorsky Krai is the Russian Far East's banking and finance center. It has more than 100 banks and affiliates and well-developed futures and stock exchanges.

The economy will be further diversified with the addition of as many as 8 government sanctioned casinos to be built in the Primorye Gambling Zone, which encompasses the entire Primorsky Krai.[12] Primorsky Entertainment Resort City, under development by NagaCorp Ltd. of Phnom Penh, Kingdom of Cambodia, will be the largest. The development is expected to cost in the region of RUB11.6 billion (approximately HK$2.7 billion, US$350 million) and have a total footprint of 214.89 hectares.[13]

Primorsky Krai's compact territory is well endowed with infrastructure. Its railway density is twice the Russian average. Railroads connect it with China and North Korea. Vladivostok, the eastern terminus of the Trans-Siberian railway, was surpassed as a port by the nearby Nakhodka-Vostochny Port container, coal and timber terminals. Primorsky Krai-based shipping companies provide 80% of marine shipping services in the Russian Far East. All the krai's significant ports are now open to international shipping.

Demographics in the past

In the 2010 Census, the following ethnic groups were listed:[7]

The krai is the location of the massive Sikhote-Alin meteorite, which fell February 12, 1947, in the Sikhote-Alin Mountains, near the village of Paseka (approximately 440 km northeast of Vladivostok).[citation needed]