Prince Andrei Alexandrovich of Russia (24 January [O.S. 12 January] 1897 – 8 May 1981) was the first son and second child of Grand Duke Alexander Mikhailovich of Russia and Grand Duchess Xenia Alexandrovna of Russia. He was also the eldest nephew of Nicholas II of Russia, the last Tsar.

Born and raised in Imperial Russia during the reign of his uncle Nicholas II, his military career in the Russian navy and the Chevalier guards was cut short by the Russian Revolution. He escaped the fate of many of his relatives killed by the Bolsheviks, fleeing to his parents' estate in Crimea. For a time, he was under house arrest there with a large group of family members. In December 1918, he left Russia with his wife and his father. He lived for a couple of years in France where his two eldest children were born. Eventually he settled in England in the household in exile of his mother. His wife died during World War II and he remarried in 1942. He then moved to Provender House in Faversham, Kent which was owned by the family of his second wife. He lived quietly there as an English country squire until his death. 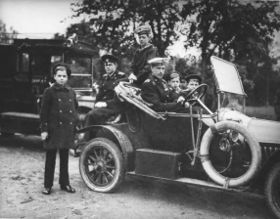 Prince Andrei Alexandrovich was born at the Winter Palace, Saint Petersburg the second child but first son of Grand Duke Alexander Mikhailovich and Grand Duchess Xenia Alexandrovna of Russia.[1] Although an Imperial Romanov Family Dynast and a grandson of Emperor Alexander III through his mother, he did not receive the title Grand Duke of Russia because he was only a great-grandson of Emperor Nicholas I in the male line through his father. Despite being only a Prince of Russia, he received a 21 gun salute at birth (which was usually reserved for Grand Dukes, with a 15 gun salute for Princes of Russia) at the insistence of his grandmother the Dowager Empress Maria Feodorovna.[2]

In his youth, before World War I, Prince Andrei toured Europe with his parents. At Biarritz, he joined his great uncle King Edward VII of the United Kingdom at the palace Hotel. Prince Andrei joined the Russian navy and served under his father Grand Duke Alexander Mikhailovich of Russia. Later he became lieutenant in the Chevalier guards, whose colonel-in-chief was his uncle, Emperor Nicholas II. Just before the Russian revolution, he was the only member of his family to accompany the Empress Alexandra and her four daughters on their last visit to the churches of Novgorod.[3] It was the last time he saw them.[4] 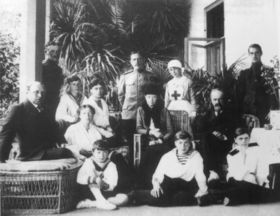 At the fall of the Russian monarchy with the February Revolution in 1917, Prince Andrei moved with his siblings and their parents to his father's property in Crimea, Ai-Todor. A large group of members of the Romanov family concentrated there, trying to escape the disturbances in the rest of the country. At first they lived undisturbed while the Russian Provisional Government was in power.

It was during this turbulent period that Prince Andrei began a relationship with Elisabetta Ruffo-Sasso (1886–1940) dei duchi di Sasso-Ruffo dei principi di Sant' Antimo, a young divorcée. They had met in St Petersburg in 1916. She was a daughter of Fabrizio Ruffo, Duke of Sasso-Ruffo and Princess Natalia Alexandrovna Mescherskaya (herself a descendant of a famous family of the Stroganovs). Elisabetta had a daughter (Elisabeth Alexandrovna Friederici) from her first marriage to Major General Alexander Alexandrovitch Friederici (1878–1916) (they had married in 1907).[5] When Elisabetta became pregnant, they married on 12 June 1918 in the family chapel at Ai-Todor in the presence of his family, including his grandmother the Dowager Empress. Prince Andrei was twenty one years old and his grandmother had thought him too young for marriage but his parents, Grand Duchess Xenia and Grand Duke Alexander, gave their permission.[3] It was not possible during this time for them to make any contact with Prince Andrei's uncle, the last reigning Emperor, Nicholas II of Russia, who was being held in captivity in internal exile. A month later, this last reigning Emperor, Nicholas II of Russia, was killed with his wife and children while there were held captive in Yekaterinburg on 16/17 July 1918. In later life Prince Andrei rarely spoke of them as he found the memories too painful.[4]

The situation of the Romanovs in Crimea deteriorated after the successful Bolshevik coup of November 1917. For a time Prince Andrei was imprisoned along with his parents, grandmother the Dowager Empress and a large number of other Romanovs relatives at Dulber, a palace in Crimea that belonged to Grand Duke Peter Nikolaevich of Russia.[2] In 1918 Russia and Germany were still at war and when German troops invaded the peninsula, they liberated the Romanovs in captivity. In December 1918, Prince Andrei left Russia with his wife Elisabetta Ruffo Di Saint Antimo, who was pregnant with their first child, and his father, Grand Duke Alexander Mikhailovich aboard the Royal Navy ship HMS Marlborough in order to attend the Paris Peace Conference, looking support in western Europe for the White Army.[2]

Prince Andrei spent the first couple of years in exile in France. For a time he lived in the French Riviera in a property that belonged to his aunt Grand Duchess Anastasia Mikhailovna of Russia. The two eldest children of Prince Andrei and his wife Elisabetta Ruffo-Sasso, called Elsa within the family, were born in France and the youngest one in London:

Short of money and without a steady occupation, Prince Andrei eventually settled permanently in England at Frogmore, where his mother Grand Duchess Xenia had a grace and favor residence named Wilderness House. They later moved to Hampton court. They were living there during World War II when Prince Andrei's wife, Elisabetta Ruffo-Sasso, stricken with cancer, died during an air raid in October 1940. One bomb hit very close to their house knocking the ceiling beam down onto Elisabetta who succumbed to the injuries shortly thereafter.

Two years later, while staying in Balmoral, Prince Andrei met his second wife Nadine McDougall (1908–2000). She was the eldest of the three daughters of Lieutenant Colonel Herbert McDougall and his Finnish wife Sylvia Borgstrom. They became engaged on 18 June 1942 and married at Norton, Kent church, near Provender on 21 September 1942. The Archbishop of Canterbury officiated the Anglican service while the Russian Orthodox wedding was presided by Archimandrite Nicholas who, as Sydney Gibbes, had been tutor of the children of Tsar Nicholas II. [7]

Prince Andrei had one daughter from his second marriage:

In 1949, Prince Andrei moved into Provender House in Faversham, Kent which was owned by the family of his second wife. The house was also famous for being a hunting lodge of Edward, the Black Prince.[8] Provender was the prince's only real home in exile.[3] He spent his time gardening, entertaining and even cooking, which he had learnt from the French chefs in his parents' palaces.[3] He was an artist and had several exhibitions of his works in Paris before World War II. He designed the cover of Let's light the Candles, a book of memoirs by his mother in law.[3] Over the years he became to enjoy his role as an English country squire, opening fetes and sporting charitable causes, particularly in the village where he lived.[3] He had some outside interest as well. After the death of his mother Grand Duchess Xenia, he inherited her position as President of the Lagat ballet and his nephew, the Marquis of Milford Haven, made him president of the Chaine Des Des Rotisseurs for London and the Home Counties.[3] Prince Andrei was the protector of the Sovereign Order of the Orthodox Knights Hospitaller of St. John of Jerusalem.[9]

Prince Andrei Alexandrovich lived quietly until his death at home in Faversham on 8 May 1981 aged 84. He was buried in the church at Norton. His widow died in 2000.[3]

N.B. After the Russian revolution members of the Imperial family tended to drop the territorial designation “of Russia” and use the princely title with the surname Romanov while keeping the appropriate style.[10]