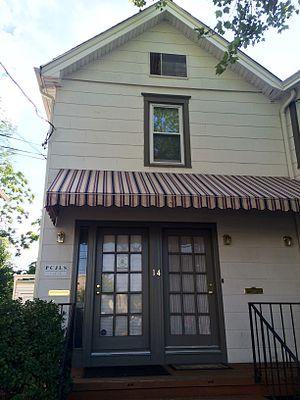 The school offices at 14 Moore Street 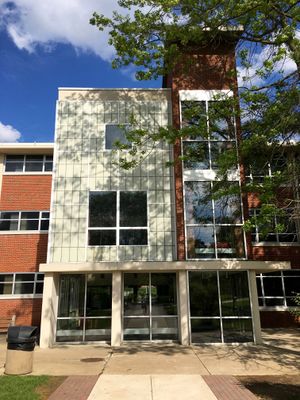 Memorial Hall at Rider University, where the school's classes are held

The Princeton Community Japanese Language School (PCJLS; プリンストン日本語学校 Purinsuton Nihongo Gakkō) is a Japanese weekend school in the Princeton, New Jersey area. It holds weekend Japanese classes for Japanese citizen children abroad to the standard of the Ministry of Education, Culture, Sports, Science and Technology (MEXT), and it also has classes for people with Japanese as a second language.

This is one of the Japanese weekend school systems in the New York metropolitan area.[3]

Five Japanese researchers at Princeton University founded the PCJLS in 1980. It was originally at that institution but moved to Rider in 1996.[3]

The school's Japanese Ministry of Education (MEXT)-compliant classes are part of its Division 1. The principal of Division 1 is funded by MEXT.[4] In addition, the school offers Japanese heritage language courses, Japanese as a foreign language courses,[5] and courses for adults as part of Division 2, which is oriented to children attending university in the United States and other persons from English-dominant households.[4] The school's teachers developed their own kanji textbooks for use in these courses.[6] Placement into a particular division involves consultations in which the student, the parents, and/or PCJLS teachers are involved.[5]

Many PCJLS students are U.S. permanent residents with at least some Japanese ancestral origin, including multilingual students with one or more parents who speak a language not English and/or not Japanese, and/or bilingual students living in English-dominant households. These students often attend heritage classes and/or Japanese as a second language courses.[5]