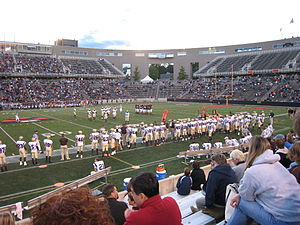 Princeton University Stadium is a stadium in Princeton, New Jersey, United States. It is primarily used for American football, and is the home field of the Princeton Tigers. The stadium opened in 1998 on the site of Princeton's former stadium, Palmer Stadium, and seats 27,773.

The year and a half needed to tear down Palmer Stadium and build the new field where it had stood meant that Princeton would not have an operational stadium for the 1997 season. Because of this the team was forced to play all of its games on the road.

The stadium's exterior shell mirrors the layout of Palmer Stadium, and the grandstands are four sided, with a second deck added on all sides except the south. The press box and luxury boxes are located above the west-side upper deck. One of the stadium's structural pillars houses the University's new rock-climbing wall, which opened in the fall of 2008. In addition to the stadium itself, the building project included building a track to the immediate south of the venue, which shares the stadium's south end facilities. (Previously, the track was located inside the stadium.)

Recently, FieldTurf was installed replacing the former grass surface at Princeton Stadium. This announcement was made in early 2006, and allowed the football team to complete its spring practice in the stadium. Princeton's sprint football team holds most of its practices inside the stadium, while the football team holds practices on the neighboring Campbell and Finney Fields. Since the Stadium's opening, only two Princeton Tigers have rushed for over 200 yards in a single game at home: Cameron Atkinson ran for 233 yards against Dartmouth on November 23, 2002, and all-ivy junior running back Jordan Culbreath rushed for 276 yards against Dartmouth on November 22, 2008.

Investor and 1979 alumnus William C. Powers, a former All-Ivy punter for the Tigers, made a $10 million gift to Princeton's football program, which is the largest donation ever to Princeton athletics. His donation funded a state-of-the-art playing surface for the stadium field. In honor of Powers and his family, the University will name Princeton Stadium's game field "Powers Field."