The Principality of Chernigov (Old East Slavic: Чєрниговскоє кънѧжьство, Ukrainian: Чернігівське князівство) is one of the largest state formations of Kievan Rus'. For a time the principality was the second most important after Kiev.

According to the Primary Chronicle before the 11th century, the principality was ruled by local (tribal) elderly and voevodes from Kiev that were appointed by the Grand Prince to collect tribute from the local population, manage judicial trials, and defend the land from external enemies. In the years 1024–1036 the principality of Chernigov was passed under the administration of son of the Vladimir the Great, Mstislav of Chernigov who came there from Tmutorokan. Together with Yaroslav the Wise Mstislav ruled the Kievan Rus establishing Chernihov as one of the most important administration centers within the Rus. Upon the death of Mstislav Chernigov was incorporated into the realm of Kiev.

This time Chernigov Principality was split into three main apanage principalities: Chernigov, Novgorod-Seversk and Murom-Ryazan, while Tmutarakan due to its remoteness became often contested and eventually was overtaken. Murom and later the Ryazan principality also drifted away from under the influence of Chernigov and after some time was contested by the Principality of Vladimir. Nonetheless the influence of Chernigov Princes remained large and they retained the title of Kiev Grand Prince for sometime. The capital of the principality, Chernihov, was one of the largest economic and cultural centers of Kievan Rus'. The Chernigov dynasty possessed Kiev for some time in the 11th–13th centuries. 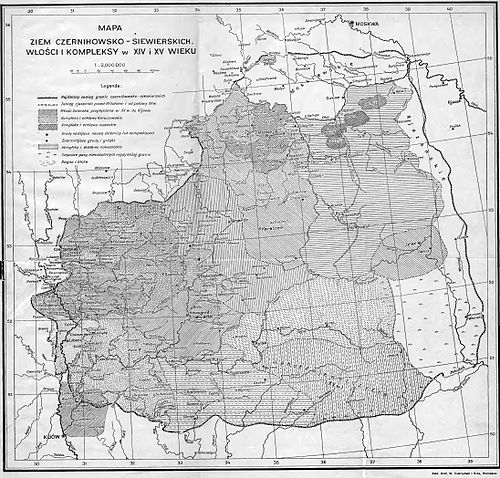 Land of Chernihiv in the 15th century