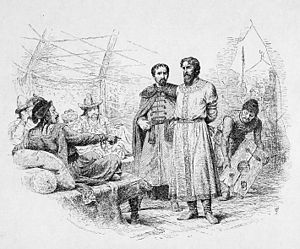 Execution of Mikhail at the Golden Horde, by Vasily Vereshchagin.

Principality of Tver (Russian: Тверское княжество) was a Russian principality or duchy, which existed between the 13th and the 15th centuries. It was one of the states established after the decay of the Kievan Rus', and in the 13th century Tver rivaled the Principality of Moscow and aimed to become the center of the united Russian state. Eventually it lost, decayed, and in 1485 was annexed by the Grand Duchy of Moscow.[1] The principality was located approximately in the area currently occupied by Tver Oblast and the eastern part of Smolensk Oblast of Russia. The capital of the principality was Tver.

In the 1230s or the 1240s, Yaroslav Vsevolodovich, the Grand Prince of Vladimir, detached the city of Tver from Principality of Pereyaslavl-Zalessky where it previously belonged and gave it to his son Alexander Nevsky.[2] In 1246, another son of Yaroslav, Yaroslav of Tver, became the Prince of Tver, and the principality was ruled by his descendants until 1485, when it was abolished.[1] In 1264, Yaroslav was appointed the Grand Prince of Vladimir, which at the time meant he was the supreme authority of all north-western Russia. In the 13th century, Principality of Tver was less dependent from the Golden Horde than other Russian principalities were, and its population grew up.[2] The combination of these two factors led to the rivalry between Tver and Moscow, each of which were trying to become the most influential Russian principality.

In 1285, Mikhail of Tver, a son of Yaroslav of Tver, succeeded his father and became the Prince of Tver. In 1305 he became the Grand Prince of Vladimir as well, however, Öz Beg Khan of the Golden Horde decided that Tver became too strong, and supported Moscow against Tver. Mikhail was summoned to the Golden Horde and executed there in 1318. His son and successor, Dmitry of Tver, was executed in the Golden Horde in 1326, and another sone and also a prince of Tver, Aleksandr Mikhailovich of Tver, was executed there in 1339 as well together with his son Fyodor. In 1327, there was an anti-Tatar uprising in Principality of Tver, which was suppressed. The city of Tver was burned down, and the principality lost a considerable part of its population. Tver never recovered from that, and eventually Moscow, which managed to remain on good terms with Tatars, absorbed all surrounding principalities and eventually became the capital of Russia.[2]

In 1371, Mikhail II of Tver was the last Prince of Tver ever appointed the Grand Prince of Vladimir. The reign of Mikhail is usually considered as the last period when Tver was still could rival Moscow and oppose the Golden Horde. He sided with the Grand Duchy of Lithuania against Moscow, which eventually led to all Russian princes starting war against Tver. Mikhail lost and had to recognioze the supremacy of the Grand Prince of Moscow, at the time Dmitry Donskoy. Whereas he managed to gain full independence for Tver shortly afterwards, Principality of Tver never was able to rival Moscow again. In the 1470s, Mikhail III of Tver had to sign a number of treaties with Moscow (Ivan III of Russia) which essentially discriminated Tver. When he tried to compensate the treaties by seeking an alliance with Lithuania, the army of Ivan III swiftly conquered Tver in 1485. The principality was annexed by the Grand Duchy of Moscow.[2]