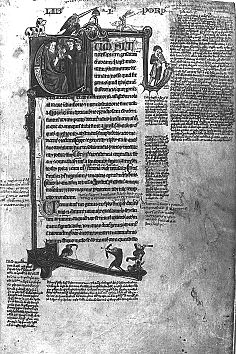 Page from a 13th/14th-century Latin transcript of Aristotle's Opera Logica.

The Prior Analytics (Greek: Ἀναλυτικὰ Πρότερα; Latin: Analytica Priora) is Aristotle's work on deductive reasoning, which is known as his syllogistic. Being one of the six extant Aristotelian writings on logic and scientific method, it is part of what later Peripatetics called the Organon. Modern work on Aristotle's logic builds on the tradition started in 1951 with the establishment by Jan Lukasiewicz of a revolutionary paradigm. The Jan Lukasiewicz approach was reinvigorated in the early 1970s in a series of papers by John Corcoran and Timothy Smiley—which inform modern translations of Prior Analytics by Robin Smith in 1989 and Gisela Striker in 2009.[1]

The term "analytics" comes from the Greek words ἀναλυτός (analutos “solvable”) and ἀναλύω (analuo "to solve", literally "to loose"). However, in Aristotle's corpus, there are distinguishable differences in the meaning of ἀναλύω and its cognates. There is also the possibility that Aristotle may have borrowed his use of the word "analysis" from his teacher Plato. On the other hand, the meaning that best fits the Analytics is one derived from the study of Geometry and this meaning is very close to what Aristotle calls έπιστήμη episteme, knowing the reasoned facts. Therefore, Analysis is the process of finding the reasoned facts.[2]

Aristotle's Prior Analytics represents the first time in history when Logic is scientifically investigated. On those grounds alone, Aristotle could be considered the Father of Logic for as he himself says in Sophistical Refutations, "... When it comes to this subject, it is not the case that part had been worked out before in advance and part had not; instead, nothing existed at all."[3]

A problem in meaning arises in the study of Prior Analytics for the word "syllogism" as used by Aristotle in general does not carry the same narrow connotation as it does at present; Aristotle defines this term in a way that would apply to a wide range of valid arguments. Some scholars prefer to use the word "deduction" instead as the meaning given by Aristotle to the Greek word συλλογισμός sullogismos. At present, "syllogism" is used exclusively as the method used to reach a conclusion which is really the narrow sense in which it is used in the Prior Analytics dealing as it does with a much narrower class of arguments closely resembling the "syllogisms" of traditional logic texts: two premises followed by a conclusion each of which is a categorial sentence containing all together three terms, two extremes which appear in the conclusion and one middle term which appears in both premises but not in the conclusion. In the Analytics then, Prior Analytics is the first theoretical part dealing with the science of deduction and the Posterior Analytics is the second demonstratively practical part. Prior Analytics gives an account of deductions in general narrowed down to three basic syllogisms while Posterior Analytics deals with demonstration.[4]

In the Prior Analytics, Aristotle defines syllogism as "... A deduction in a discourse in which, certain things being supposed, something different from the things supposed results of necessity because these things are so." In modern times, this definition has led to a debate as to how the word "syllogism" should be interpreted. Scholars Jan Lukasiewicz, Józef Maria Bocheński and Günther Patzig have sided with the Protasis-Apodosis dichotomy while John Corcoran prefers to consider a syllogism as simply a deduction.[5]

In the third century AD, Alexander of Aphrodisias's commentary on the Prior Analytics is the oldest extant and one of the best of the ancient tradition and is available in the English language.[6]

The Prior Analytics represents the first formal study of logic, where logic is understood as the study of arguments. An argument is a series of true or false statements which lead to a true or false conclusion.[9] In the Prior Analytics, Aristotle identifies valid and invalid forms of arguments called syllogisms. A syllogism is an argument that consists of at least three sentences: at least two premises and a conclusion. Although Aristotles does not call them "categorical sentences," tradition does; he deals with them briefly in the Analytics and more extensively in On Interpretation.[10] Each proposition (statement that is a thought of the kind expressible by a declarative sentence)[11] of a syllogism is a categorical sentence which has a subject and a predicate connected by a verb. The usual way of connecting the subject and predicate of a categorical sentence as Aristotle does in On Interpretation is by using a linking verb e.g. P is S. However, in the Prior Analytics Aristotle rejects the usual form in favor of three of his inventions: 1) P belongs to S, 2) P is predicated of S and 3) P is said of S. Aristotle does not explain why he introduces these innovative expressions but scholars conjecture that the reason may have been that it facilitates the use of letters instead of terms avoiding the ambiguity that results in Greek when letters are used with the linking verb.[12] In his formulation of syllogistic propositions, instead of the copula ("All/some... are/are not..."), Aristotle uses the expression, "... belongs to/does not belong to all/some..." or "... is said/is not said of all/some..."[13] There are four different types of categorical sentences: universal affirmative (A), particular affirmative (I), universal negative (E) and particular negative (O).

A method of symbolization that originated and was used in the Middle Ages greatly simplifies the study of the Prior Analytics. Following this tradition then, let:

a = belongs to every

e = belongs to no

i = belongs to some

o = does not belong to some

Categorical sentences may then be abbreviated as follows:

From the viewpoint of modern logic, only a few types of sentences can be represented in this way.[14]

Symbolically, the Three Figures may be represented as follows:

Syllogism in the first figure

Or what amounts to the same thing:

In the Middle Ages, for mnemonic reasons they were called respectively "Barbara", "Celarent", "Darii" and "Ferio".[21]

Syllogism in the second figure

The above statement can be simplified by using the symbolical method used in the Middle Ages:

In the Middle Ages, for mnemonic resons they were called respectively "Camestres", "Cesare", "Festino" and "Baroco".[24]

Syllogism in the third figure

Aristotle says in the Prior Analytics, "... If one term belongs to all and another to none of the same thing, or if they both belong to all or none of it, I call such figure the third." Referring to universal terms, "... then when both P and R belongs to every S, it results of necessity that P will belong to some R."[25]

When the four syllogistic propositions, a, e, i, o are placed in the third figure, Aristotle develops six more valid forms of deduction:

In the Middle Ages, for mnemonic reasons, these six forms were called respectively: "Darapti", "Felapton", "Disamis", "Datisi", "Bocardo" and "Ferison".[26]

"In Aristotelian syllogistic (Prior Analytics, Bk I Caps 4-7), syllogisms are divided into three figures according to the position of the middle term in the two premises. The fourth figure, in which the middle term is the predicate in the major premise and the subject in the minor, was added by Aristotle's pupil Theophrastus and does not occur in Aristotle's work, although there is evidence that Aristotle knew of fourth-figure syllogisms."[28] 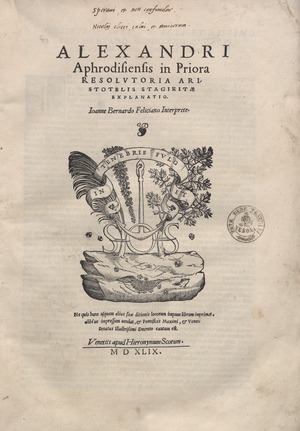 George Boole's unwavering acceptance of Aristotle’s logic is emphasized by the historian of logic John Corcoran in an accessible introduction to Laws of Thought[29] Corcoran also wrote a point-by-point comparison of Prior Analytics and Laws of Thought.[30] According to Corcoran, Boole fully accepted and endorsed Aristotle’s logic. Boole’s goals were “to go under, over, and beyond” Aristotle’s logic by 1) providing it with mathematical foundations involving equations, 2) extending the class of problems it could treat—from assessing validity to solving equations--, and 3) expanding the range of applications it could handle—e.g. from propositions having only two terms to those having arbitrarily many.

More specifically, Boole agreed with what Aristotle said; Boole’s ‘disagreements’, if they might be called that, concern what Aristotle did not say. First, in the realm of foundations, Boole reduced the four propositional forms of Aristotle's logic to formulas in the form of equations—-by itself a revolutionary idea. Second, in the realm of logic’s problems, Boole’s addition of equation solving to logic—-another revolutionary idea—-involved Boole’s doctrine that Aristotle’s rules of inference (the “perfect syllogisms”) must be supplemented by rules for equation solving. Third, in the realm of applications, Boole’s system could handle multi-term propositions and arguments whereas Aristotle could handle only two-termed subject-predicate propositions and arguments. For example, Aristotle’s system could not deduce “No quadrangle that is a square is a rectangle that is a rhombus” from “No square that is a quadrangle is a rhombus that is a rectangle” or from “No rhombus that is a rectangle is a square that is a quadrangle”.