Prithu chasing Prithvi, who is in the form of a cow.

Prithvi (Sanskrit: पृथ्वी, pṛthvī, also pṛthivī) "the Vast One" is the Sanskrit name for the earth as well as the name of a devi in Hinduism and Buddhism.

As Pṛthvī Mātā "Mother Earth" she contrasts with Dyaus Pita "father sky". In the Rigveda, Earth and Sky are primarily addressed in the dual as Dyavaprthivi.[1] She is associated with the cow. Prithu, an incarnation of Vishnu, milked her in cow's form.

She is a national personification in Indonesia, where she is known as Ibu Pertiwi.

In Buddhist texts and visual representations, Pṛthvī is described as both protecting Gautama Buddha and as being his witness for his enlightenment. Prithvi appears in Early Buddhism in the Pāli Canon, dispelling the temptation figure Mara by attesting to Gautama Buddha's worthiness to attain enlightenment.[2] The Buddha is very frequently illustrated in figurative art wielding bhūmisparśa or "earth-touching" mudrā. [3] 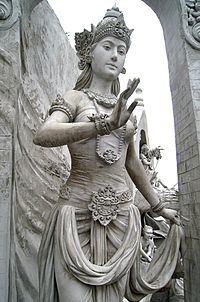