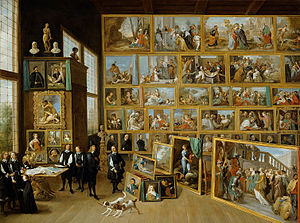 Part of the famous collection formed by Archduke Leopold Wilhelm of Austria when Governor of the Spanish Netherlands from 1647 to 1656. David Teniers the Younger

A private collection is a privately owned collection of works, usually a collection of art. If seen in a museum alongside a work or describing a work, it signifies that piece of art in a museum is not actually owned by that museum, but is on loan from an independent source, either for the long term or for temporary exhibition. This source will usually be an art collector, although it could be a school, church organization, bank or other company, or any form of institution. Collectors of books, even if they collect for aesthetic reasons (fine bookbindings or illuminated manuscripts for example), are called bibliophiles, and their collections are referred to as libraries. 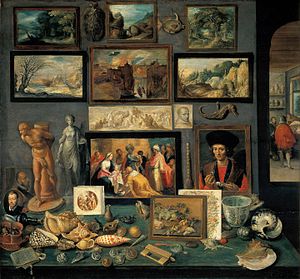 A corner of a cabinet of curiosities, painted by Frans II Francken in 1636, reveals the range of connoisseurship a Baroque-era virtuoso might evince

Art collecting was common among the wealthy in the Ancient World in both Europe and East Asia, and in the Middle Ages, but developed in its modern form during the Renaissance and continues to the present day.[1] The Royal collections of most countries were originally the grandest of private collections but are now mostly in public ownership. However the British Royal Collection remains under the care of the Crown, though distinguished from the private property of the British Royal Family. The cabinet of curiosities was an important mixed form of collection, including art and what we would now call natural history or scientific collections. These were formed by royalty but smaller ones also by merchants and scholars.

The tastes and habits of collectors have played a very important part in determining what art was produced, providing the demand that artists supply. Many types of objects, such as medals, engravings, small plaquettes, modern engraved gems and bronze statuettes were essentially made for the collector's market. By the 18th century all homes of the well-to-do were expected to contain a selection of objects, from paintings to porcelain, that could form part of an art collection, and the collections of those who would normally qualify for the term had to be considerably larger, and some were enormous. Increasingly collectors tended to specialize in one or two types of work, although some, like George Salting (1835-1909), still had a very wide scope for their collections. Apart from antiquities, which were regarded as perhaps the highest form of collecting from the Renaissance until relatively recently, and also books, paintings and prints from the late 15th century onwards, until the 18th century collectors tended to collect fairly new works from Europe. The extension of serious collecting to art from all periods and places was an essentially 19th-century development, or at least dating to the Age of Enlightenment. Trecento paintings were little appreciated until about the 1830s, and Chinese ritual bronzes and jades until perhaps the 1920s. Collecting of African art was rare until after World War II.

In recognition of its importance in influencing the production of new art and the preservation of old art, art collecting has been an area of considerable academic research in recent decades, having been somewhat neglected previously.

Very famous collections that are now dispersed include the Borghese Collection and Farnese collection in Rome, and the Orleans Collection in Paris, mostly sold in London. When this happens, it can be a large loss to those interested in art as the initial vision of the collector is lost.

The Princely Family of Liechtenstein have works by such artists as Hals, Raphael, Rembrandt and Van Dyck, a collection containing some 1,600 works of art, but were unable to show them since 1945 when they were smuggled out of Nazi Germany. The works were finally displayed in the Liechtenstein Museum after nearly 60 years with most in storage.[2] The important collection of the Thyssen family, mostly kept in the Thyssen-Bornemisza Museum, which settled in Madrid in 1992, was bought to the Spanish state. Only an exhibited part, the collection of Carmen Cervera, widow of the late Baron Thyssen, remains private but exhibited separately in the museum.

Many collections were left to the public in some form, and are now museums, or the nucleus of a museum's collection. Most museums are formed around one or more formerly private collection acquired as a whole. Major examples where few or no additions have been made include the Wallace Collection and Sir John Soane's Museum in London, the Frick Collection and Morgan Library in New York, The Phillips Collection in Washington DC, and the Museu Calouste Gulbenkian in Lisbon Portugal.