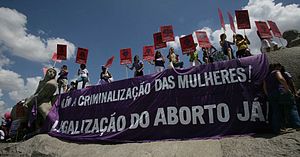 Many of the terms used in the debate are seen as political framing: terms used to validate one's own stance while invalidating the opposition's. For example, the labels "pro-choice" and "pro-life" imply endorsement of widely held values such as liberty and freedom, while suggesting that the opposition must be "anti-choice" or "anti-life" (alternatively "pro-coercion" or "pro-death").[1] These views do not always fall along a binary; in one Public Religion Research Institute poll, seven in ten Americans described themselves as "pro-choice" while almost two-thirds described themselves as "pro-life."[2] The Associated Press favors the terms "abortion rights" and "anti-abortion" instead.[3]

Feminists of the late 19th century were often opposed to the legalization of abortion.[4][5] In the The Revolution, operated by Elizabeth Cady Stanton and Susan B. Anthony, an anonymous contributor signing "A" wrote in 1869 about the subject, arguing that instead of merely attempting to pass a law against abortion, the root cause must also be addressed.

Simply passing an anti-abortion law would, the writer stated, "be only mowing off the top of the noxious weed, while the root remains. [...] No matter what the motive, love of ease, or a desire to save from suffering the unborn innocent, the woman is awfully guilty who commits the deed. It will burden her conscience in life, it will burden her soul in death; But oh! thrice guilty is he who drove her to the desperation which impelled her to the crime."[5][6][7][8]

File:Stella Browne.gif
Stella Browne was a pioneering feminist who campaigned for the liberalization of abortion law.

The movement towards the liberalization of abortion law emerged in the 1920s and '30s in the context of the victories that had been recently won in the area of birth control. Campaigners including Marie Stopes in England and Margaret Sanger in the US had succeeded in bringing the issue into the open, and birth control clinics were established which offered family planning advice and contraceptive methods to women in need.

In 1929, the Infant Life Preservation Act was passed in Britain, which amended the law (Offences against the Person Act 1861) so that an abortion carried out in good faith, for the sole purpose of preserving the life of the mother, would not be an offence.[9]

Stella Browne was a leading birth control campaigner, who increasingly began to venture into the more contentious issue of abortion in the 1930s. Browne's beliefs were heavily influenced by the work of Havelock Ellis, Edward Carpenter and other sexologists.[10] She came to strongly believe that working women should have the choice to become pregnant and to terminate their pregnancy while they worked in the horrible circumstances surrounding a pregnant woman who was still required to do hard labour during her pregnancy.[11] In this case she argued that doctors should give free information about birth control to women that wanted to know about it. This would give women agency over their own circumstances and allow them to decide whether they wanted to be mothers or not.[12]

In the late 1920s Browne began a speaking tour around England, providing information about her beliefs on the need for accessibility of information about birth control for women, women’s health problems, problems related to puberty and sex education and high maternal morbidity rates among other topics.[10] These talks urged women to take matters of their sexuality and their health into their own hands. She became increasingly interested in her view of the woman’s desire to terminate their pregnancies, and in 1929 she brought forward her lecture “The Right to Abortion” in front of the World Sexual Reform Congress in London.[10] In 1931 Browne began to develop her argument for women’s desire to decide to have an abortion.[10] She again began touring, giving lectures on abortion and the negative consequences that followed if women were unable to terminate pregnancies of their own choosing such as: suicide, injury, permanent invalidism, madness and blood-poisoning.[10]

File:Aleck bourne trial.jpg
Aleck Bourne was acquitted for performing an abortion on a rape victim in 1938, a landmark case in the movement for abortion legalization.

Other prominent feminists, including Frida Laski, Dora Russell, Joan Malleson and Janet Chance began to champion this cause - the cause broke dramatically into the mainstream in July 1932 when the British Medical Association council formed a committee to discuss making changes to the laws on abortion.[10] On 17 February 1936, Janet Chance, Alice Jenkins and Joan Malleson established the Abortion Law Reform Association as the first advocacy organisation for abortion liberalization. The association promoted access to abortion in the United Kingdom and campaigned for the elimination of legal obstacles.[13] In its first year ALRA recruited 35 members, and by 1939 had almost 400 members.[13]

The ALRA was very active between 1936 and 1939 sending speakers around the country to talk about Labour and Equal Citizenship and attempted, though most often unsuccessfully, to have letters and articles published in newspapers. They became the most popular when a member of the ALRA’s Medico-Legal Committee received the case of a fourteen-year-old girl who had been raped, and received a termination of this pregnancy from Dr. Joan Malleson, a progenitor of the ALRA.[13] This case gained a lot of publicity, however once the war began, the case was tucked away and the cause again lost its importance to the public.

In 1938, Joan Malleson precipitated one of the most influential cases in British abortion law when she referred a pregnant fourteen-year old rape victim to gynaecologist Aleck Bourne. He performed an abortion, then illegal, and was put on trial on charges of procuring abortion. Bourne was eventually acquitted in Rex v. Bourne as his actions were "...an example of disinterested conduct in consonance with the highest traditions of the profession".[14] This court case set a precedent that doctors could not be prosecuted for performing an abortion in cases where pregnancy would probably cause "mental and physical wreck".

The Abortion Law Reform Association continued its campaigning after the War, and this, combined with broad social changes brought the issue of abortion back into the political arena in the 1960s. President of the Royal College of Obstetricians and Gynaecologists John Peel chaired the committee advising the British Government on what became the 1967 Abortion Act, which allowed for legal abortion on a number of grounds, including to avoid injury to the physical or mental health of the woman or her existing child(ren) if the pregnancy was still under 28 weeks.[15] 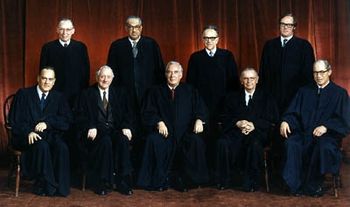 The United States Supreme Court membership in 1973 at the time of Roe v. Wade.

In America an abortion reform movement emerged in the 1960s. In 1964 Gerri Santoro of Connecticut died trying to obtain an illegal abortion and her photo became the symbol of the abortion legalization movement. Some abortion legalization activist groups developed their own skills to provide abortions to women who could not obtain them elsewhere. As an example, in Chicago, a group known as "Jane" operated a floating abortion clinic throughout much of the 1960s. Women seeking the procedure would call a designated number and be given instructions on how to find "Jane".[16]

In the late 1960s, a number of organizations were formed to mobilize opinion both against and for the legalization of abortion. The forerunner of the NARAL Pro-Choice America was formed in 1969 to oppose restrictions on abortion and expand access to abortion.[17] In late 1973 NARAL became the National Abortion Rights Action League.

The landmark judicial ruling of the Supreme Court in Roe v. Wade ruled that a Texas statute forbidding abortion except when necessary to save the life of the mother was unconstitutional. The Court arrived at its decision by concluding that the issue of abortion and abortion legality falls under the right to privacy. The Court held that a right to privacy existed and included the desire to have an abortion. The court found that a mother can legally abort until viability, a point to be determined by the abortion doctor. After viability a woman can obtain an abortion for health reasons, which the Court defined broadly to include psychological well-being in the decision Doe v. Bolton, delivered concurrently.

From the 1970s, and the spread of second-wave feminism, the desire to abort, and reproductive rights became unifying issues among various feminist groups in Canada, the United States, the Netherlands, Britain, Norway, France, Germany, and Italy.[18] 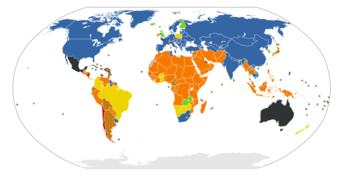 South Africa allows abortion on demand under its Choice on Termination of Pregnancy Act. Most African nations, however, have abortion bans except in cases where the woman's life or health is at risk. A number of abortion legalization international organizations have made altering abortion laws and expanding family planning services in sub-Saharan Africa and the developing world a top priority.

Main article: Abortion in the Republic of Ireland

Abortion is illegal in the Republic of Ireland except when the woman's life is threatened by a medical condition or a suicide risk, since a 1983 referendum amended the constitution. Subsequent amendments – the thirteenth and fourteenth – guaranteed the legality of traveling abroad (for abortions) and of distributing and obtaining information of "services" not available in the country, such as abortion, which are lawful in other countries. A proposal to remove suicide risk as a ground for abortion was struck down in a 2002 referendum. Thousands of women get around the ban by privately traveling to the other European countries (typically Britain and the Netherlands) to undergo terminations.[21]

The Labour Party, Communist Party, Socialist Party and Irish Republican Socialist Party are in favor of liberalizing the laws. For many other parties (such as the Green Party), it is a 'matter of conscience' and they have no official line on the issue.[22]

Abortion is also illegal in Northern Ireland, except in cases when the woman is threatened by a medical condition, physical or mental.[23][24]

In the United Kingdom, the Abortion Act 1967 legalized abortion, except in Northern Ireland. In Great Britain, the law states that pregnancy may be terminated up to 24 weeks[25] if it:

However, the criterion of risk to mental and physical health is applied broadly, and de facto makes abortion available on demand,[27] though this still requires the consent of two National Health Service doctors. Abortions in Great Britain are provided at no out-of-pocket cost to the patient by the NHS.

The Labour Party and the Liberal Democrats are predominantly pro-abortion-legalization parties, though with significant minorities in each either holding more restrictive definitions of the legality to abort, or subscribing to an anti-abortion analysis. The Conservative Party is more evenly split between both camps and its former leader, former British Prime Minister David Cameron, supports abortion on demand in the early stages of pregnancy.[28]

Abortion was first legalized in 1978.[29] In April 2005, the Iranian Parliament approved a new bill easing the conditions by also allowing abortion in certain cases when the fetus shows signs of handicap,[30][31][32] and the Council of Guardians accepted the bill in 15/June/2005.[31] Legal abortion is now allowed if the mother's life is in danger, and also in cases of fetal abnormalities that makes it not viable after birth (such as anencephaly) or produce difficulties for mother to take care of it after birth, such as major thalassemia or bilateral polycystic kidney disease.

Chapter XXIX of the Penal Code of Japan makes abortion illegal in Japan. However, the Maternal Health Protection Law allows approved doctors to practice abortion with the consent of the mother and her spouse, if the pregnancy has resulted from rape, or if the continuation of the pregnancy may severely endanger the maternal health because of physical reasons or economic reasons. Other people, including the mother herself, trying to abort the fetus can be punished by the law. People trying to practice abortion without the consent of the woman can also be punished, including the doctors.