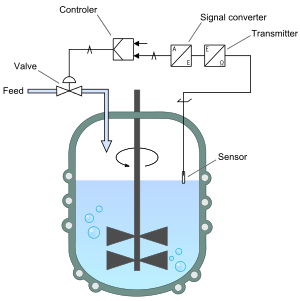 Example of control system of a continuous stirred-tank reactor. 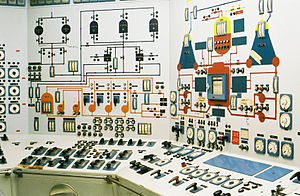 Control panel of a nuclear reactor.

Process control is an engineering discipline that deals with architectures, mechanisms and algorithms for maintaining the output of a specific process within a desired range. For instance, the temperature of a chemical reactor may be controlled to maintain a consistent product output.

Process control is extensively used in industry and enables mass production of consistent products from continuously operated processes such as oil refining, paper manufacturing, chemicals, power plants and many others. Process control enables automation, by which a small staff of operating personnel can operate a complex process from a central control room.

Process control may either use feedback or it may be open loop. Control may also be continuous (automobile cruise control) or cause a sequence of discrete events, such as a timer on a lawn sprinkler (on/off) or controls on an elevator (logical sequence).

A familiar example of feedback control is cruise control on an automobile. Here speed is the measured variable. The operator (driver) adjusts the desired speed set point (e.g. 100 km/hr) and the controller monitors the speed sensor and compares the measured speed to the set point. Any deviations, such as changes in grade, drag, wind speed or even using a different grade of fuel (for example an ethanol blend) are corrected by the controller making a compensating adjustment to the fuel valve open position, which is the manipulated variable. The controller makes adjustments having information only about the error (magnitude, rate of change or cumulative error) although settings known as tuning are used to achieve stable control. The operation of such controllers is the subject of control theory.

A commonly used control device called a programmable logic controller, or a PLC, is used to read a set of digital and analog inputs, apply a set of logic statements, and generate a set of analog and digital outputs.

For example, if an adjustable valve were used to hold level in a tank the logical statements would compare the equivalent pressure at depth setpoint to the pressure reading of a sensor below the normal low liquid level and determine whether more or less valve opening was necessary to keep the level constant. A PLC output would then calculate an incremental amount of change in the valve position. Larger more complex systems can be controlled by a Distributed Control System (DCS) or SCADA system.

Processes can be characterized as one or more of the following forms: