Procurator General of the Soviet Union

The Procurator General of the USSR (Генеральный прокурор СССР in Russian, or Generalnyi prokuror SSSR), was the highest functionary of the Office of Public Procurator of the USSR, responsible for the whole system of offices of public procurators and supervision of their activities on the territory of the Soviet Union.

The office of procurator had its historical roots in Imperial Russia, and under Soviet law public procurators had wide ranging responsibilities including, but not limited to, those of public prosecutors found in other legal systems. Offices of Public Procurators were and are still used in other countries adhering to the doctrine of Socialist law.

The Office of Public Procurator of the USSR was created in 1936, and its head was called Public Procurator of the USSR until 1946, when it was changed to Procurator General of the USSR. According to the 1936 Soviet Constitution, the Procurator General exercised the highest degree of direct or indirect (through subordinate public procurators) control over the accurate execution of laws by all ministries, departments, their subordinate establishments and enterprises, executive and administrative bodies of local Soviets, cooperative organizations, officials (including judges in court proceedings), and citizens on behalf of the state.

The Procurator General had the right to present his issues to the Presidium of the Supreme Soviet that needed to be solved in the legislative manner or demanded interpretation of the law.

The Procurator General's participation in the plenary sessions of the Supreme Court of the USSR was mandatory. He had the right to obtain on demand any case from any court for checking purposes, voice his protest over a law, verdict, decree, or definition, which had already come into force, of any court and to suspend them until the matter was resolved. 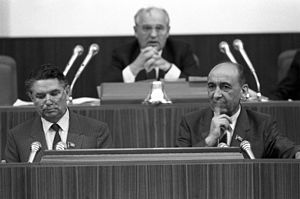