Promotional merchandise, promotional items, promotional products, promotional gifts, or advertising gifts, sometimes nicknamed swag or schwag, are articles of merchandise (often branded with a logo or slogan) used in marketing and communication programs. They are given away to promote a company, corporate image, brand, or event at trade shows, conferences, and as part of guerrilla marketing campaigns.

The first known promotional products in the United States are commemorative buttons dating back to the election of George Washington in 1789. During the early 19th century, there were some advertising calendars, rulers, and wooden specialties, but there was no organized industry for the creation and distribution of promotional items until later in the 19th century.

Jasper Meeks, a printer in Coshocton, Ohio, is considered by many to be the originator of the industry when he convinced a local shoe store to supply book bags imprinted with the store name to local schools. Henry Beach, another Coshocton printer and a competitor of Meeks, picked up on the idea, and soon the two men were selling and printing marble bags, buggy whips, card cases, fans, calendars, cloth caps, aprons, and even hats for horses.[1]

In 1904, 12 manufacturers of promotional items got together to found the first trade association for the industry. That organization is now known as the Promotional Products Association International or PPAI, which currently has more than 10,000 global members.[2] PPAI represents the promotional products industry of more than 22,000 distributors and approximately 4,800 manufacturers.

In later years these catalogues could be over-branded to reflect a distributor’s corporate image and distributors could then give them to their end user customers as their own. In the early years promotional merchandise catalogues were very much sales tools and customers would buy the products offered on the pages.

In the 1990s new catalogue services emerged for distributors from various sources. In the nineties there was also the creation of ‘Catalogue Groups’ who offered a unique catalogue to a limited geographical group of promotional merchandise distributor companies. Membership of a Catalogue Group could also offer improved buying terms, a network of fellow distributor companies, & provide other support services. Examples of a Catalogue Group is Trade Only Spectrum Catalogue, Page Group and the Envoy Group, offering discounted products to a select group of distributors who have all been in the industry for over three years. Members of the Envoy Group have regional exclusivity as one of their perks providing some protection to the low barrier to entry of the market

Up until the 1990s the industry had a peak season in which the majority of promotional products were sold. The season featured around Christmas & the giving of gifts. This changed significantly in the early 1990s as Christmas gifts became less appropriate in a multicultural Britain. Corporate companies were also becoming more inventive in their marketing and were now using promotional merchandise throughout the year to support the promotion of brands, products & events. In the early 21st century the role of a promotional merchandise catalogue started to change, as it could no longer fully represent the vast range of products in the market place. By 2007, catalogues were being mailed to targeted customer lists, rather than the blanket postal mailings that had taken place before. The catalogue had now become seen more as a ‘business card’ demonstrating the concept of what a company did, rather than a critical sales tool. In 2009 published results from research involving a representative group of distributor companies, which indicated the usage of hard copy catalogues was expected to fall up to 25% in 2010.

Distributor companies are experts in sourcing creative promotional products. Traditionally, to ensure that they had an effective manufacturer network, they kept themselves aware of the trade product ranges available from mailings received from manufacturers themselves and by attending trade exhibitions across the world, for example the Trade Only National Show in the UK, the Promotional Product Service Institute (PSI) show in Europe and the Promotional Products Association International (PPAI) Show in Las Vegas, NV.

In 2004, the way the trade sourced promotional products began to change with the launch an online trade sourcing service, which united distributors with manufacturers worldwide. This service is purely for vetted trade promotional merchandise distributor companies and is not available to corporate end user companies.

Promotional products by definition are custom printed with a logo, company name or message usually in specific PMS colors. Distributors help end-users gather artwork in the correct format, and in some cases also create artwork for end-users. Distributors then request the artwork from the manufacturers, printers or suppliers.

Many distributors operate on the internet and/or in person. Many suppliers wish not to invest in the staffing to service end-users' needs, which is the purpose of merchandise distributor companies. 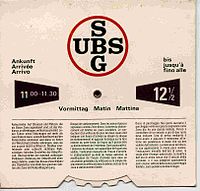 Swiss parking disk (early 1970s). Selected arrival time shows at the left window, departure at the right. Other side of disk is used for afternoon parking. Disk was a sales promotion for UBS bank.

Promotional merchandise is used globally to promote brands, products, and corporate identity. They are also used as giveaways at events, such as exhibitions and product launches. Promotional products can be used for non-profit organizations to promote their cause, as well as promote certain events that they hold, such as walks or any other event that raises money for a cause.

Almost anything can be branded with a company’s name or logo and used for promotion. Common items include t-shirts, caps, keychains, posters, bumper stickers, pens, mugs, or mouse pads. The largest product category for promotional products is wearable items, which make up more than 30% of the total. Eco-friendly promotional products such as those created from recycled materials and renewable resources have been experiencing a significant surge in popularity.

Most promotional items are relatively small and inexpensive, but can range to higher-end items; for example celebrities at film festivals and award shows are often given expensive promotional items such as expensive perfumes, leather goods, and electronics items. Companies that provide expensive gifts for celebrity attendees often ask that the celebrities allow a photo to be taken of them with the gift item, which can be used by the company for promotional purposes. Other companies provide luxury gifts such as handbags or scarves to celebrity attendees in the hopes that the celebrities will wear these items in public, thus garnering publicity for the company's brand name and product.

Promotional items are also used in politics to promote candidates and causes. Promotional items as a tool for non-commercial organizations, such as schools and charities are often used as a part of fund raising and awareness-raising campaigns. A prominent example was the livestrong wristband, used to promote cancer awareness and raise funds to support cancer survivorship programs and research.

Using promotional merchandise in Guerrilla Marketing involves branding in such a way as to create a specific visual effect, attracting more attention.

The giving of corporate gifts vary across international borders and cultures, with the type of product given often varying from country to country.

In the UK, the industry has two main trade bodies, Promota (Promotional Merchandise Trade Association) founded in 1958, and the BPMA (British Promotional Merchandise Association) established in 1965. These trade associations represent the industry and provide services to both manufacturers & distributors of promotional merchandise. The BPMA provides a range of services including market research into the UK promotional merchandise industry.[4] Since 2010 the BPMA has partnered with Trade Only, A UK company that organizes the primary UK Trade Show for the Promotional Product Industry, this takes place at the Ricoh Arena in Coventry usually the third week of January. The BPMA host an awards dinner and banquet on the middle night of the exhibition which is called the Trade Only National Show

In the United States, PPAI (the Promotional Products Association International) is the not for profit association, offering the industry's largest tradeshow (The PPAI Expo), as well as training, online member resources, and legal advocacy. Another organization, the Advertising Specialty Institute, promotes itself as the largest media and marketing organization serving the advertising specialty industry.[5]

Top promotional products companies in the United States in 2013

According to research completed and published in 2008 the UK and Ireland promotional merchandise industry had an overall value of £850m. By mid 2009 the market had decreased to £712m as the UK’s worst ever recession took grip. In July 2009 published research demonstrated that the top 10 promotional merchandise products were promotional pens, bags, clothing, plastic items, USB memory sticks, mugs, leather items, polyurethane conference folders, and umbrellas. The July research from a representation industry focus group also found that the current fastest growing product was hand sanitiser, which at the time coincided with the outbreak & growth of swine flu in the UK.