A prostration (Pali: panipāta, Skt.: namas-kara, Ch.: li-pai, Jp.: raihai) is a gesture used in Buddhist practice to show reverence to the Triple Gem (comprising the Buddha, his teachings, and the spiritual community) and other objects of veneration.

Among Buddhists prostration is believed to be beneficial for practitioners for several reasons, including:

In contemporary Western Buddhism, some teachers use prostrations as a practice unto itself,[1] while other teachers relegate prostrations to customary liturgical ritual, ancillary to meditation.[2]

Prostrations may also be subsumed within sadhana repetitions of various vinyasa forms of yogic discipline, such as Trul Khor, e.g. Importantly, vinyasa forms were directly influenced from Buddhist 'impermanence' (anitya) as was the language of Patanjali's Yoga Sutras informed by Buddhist discourse.

In the Pali canon, laypersons prostrating before the then-living Buddha is mentioned in several suttas.[3] In Theravada Buddhism, as part of daily practice, one typically prostrates before and after chanting and meditation. On these occasions, one does typically prostrates three times: once to the Buddha, once to the Dhamma, and once to the Sangha. More generally, one can also prostrate before "any sacred object of veneration."[4]

Theravada Buddhists execute a type of prostration that is known as "five-point veneration" (Pali: patitthitapanca) or the "five-limbed prostration" (Pali: pañc'anga-vandana) where the two palms and elbows, two sets of toes and knees, and the forehead are placed on the floor.[5] More specifically:

... In the kneeling position, one's hand in añjali [palms together, fingers flat out and pointed upward] are raised to the forehead and then lowered to the floor so that the whole forearm to the elbow is on the ground, the elbow touching the knee. The hands, palm down, are four to six inches apart with just enough room for the forehead to be brought to the ground between them. Feet are still as for the kneeling position and the knees are about a foot apart....[6]

In Thailand, traditionally, each of the three aforementioned prostrations are accompanied by the following Pali verses:[6]

In Theravadin countries such as Sri Lanka, when one goes before one's teacher, in order to "open one's mind up to receive instructions," one bows and recites the phrase, "Okāsa ahaṃ bhante vandāmi" ("I pay homage to you venerable sir").[7]

How well, too, I remember the first time I came before my teacher in dokusan. As you know, it is customary to prostrate oneself before the roshi as a sign of respect and humility. But how that went against my grain, and how I resisted it! "... [W]hat does all this have to do with Zen?"

My teacher, well aware of these thoughts within me, said nothing, viewing my frustrated maneuvers at each dokusan with an amused smile. Then one day, when I was having a more awkward time than usual trying to prostrate, he suddenly shot at me, "Kapleau-san, when you make prostrations in dokusan you are not bowing down before me but before your own Buddha-nature."[8]

In Zen Buddhism, both half- and full-prostrations are used. Zen master Robert Aitken writes:

The Zen student is taught that in raihai [prostration] one throws everything away. Pivoting the forearms on the elbows and raising the hands [palms up] while prostrated is the act of raising the Buddha's feet above one's head.[9]

The act of unself-conscious prostration before a Buddha is ... possible under the impetus of reverence and gratitude. Such "horizontalizings of the mast of ego"[10] cleanse the heart-mind, rendering it flexible and expansive, and open the way to an understanding and appreciation of the exalted mind and manifold virtues of the Buddha and patriarchs. So there arises within us a desire to express our gratitude and show our respect before their personalized forms through appropriate rituals.[11]

Zen master Huang Po, of the 9th century, is said to have done prostrations so intensely that he wore a permanent red mark on his forehead.[12] 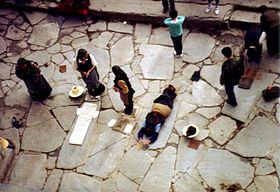 Pilgrims prostrating at the Jokhang, Lhasa

In Vajrayana Buddhism, prostrations are often performed before meditation or teachings, but can form a separate practice by itself. Prostrations are seen as a means of purifying ones body, speech and mind of karmic defilements, especially pride.[13] Prostrations are used in tandem with visualization and can be used to express reverence to Guru Rinpoche[14] and others.

For example, in the context of offering homage to Guru Rinpoche, prostrations are to be performed as follows:

...Bring your hands together in the 'lotus bud' mudra (the base of the palm and the fingertips together, and thumbs slightly tucked in) and place them on the crown of the head, then to the throat and heart. As you place your hands on your crown, you offer homage to Guru Rinpoche's enlightened body, purify defilements and obscurations incurred through the avenue of your body, and establish the potential to realize nirmanakaya. At your throat, you offer homage to his enlightened speech, and establish the potential to realized sambhogakaya. Bringing your hands to your heart, you offer homage to his enlightened mind, purify your mind's obscurations, and establish the potential to realize dharmakaya.

The actual prostration is performed by dropping the body forward and stretching it full length on the floor, the arms outstretched in front.... Again, with hands in the lotus bud mudra, bend your arms back and touch your hands to the top of your head, a gesture that acknowledges the blessing flowing from Guru Rinpoche. Then stretch your arms out once more and push yourself up.... Bring your hands into the lotus bud mudra for the third time and touch your heart in a gesture of reverence. Then, with a smooth motion, bring your hands to your crown and perform the next prostration....[15]

This form of prostration is used with enlightened beings other than Guru Rinpoche as well.

Prostrations done in large numbers (like 100,000) can be part of the preliminary practices to the practice of tantra. Other practices like this can be reciting the Refuge prayer, mandala offerings, Vajrasattva mantras and other practices called ngöndro.