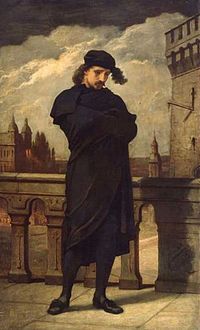 In Shakespeare's Hamlet, Prince of Denmark, Hamlet is the protagonist. He is set in a tragic situation, where the ghost of his dead father urges him to take revenge on his uncle, who had murdered the father. Portrait of Hamlet by William Morris Hunt, oil on canvas, circa 1864.

The protagonist (from Ancient Greek πρωταγωνιστής (protagonistes), meaning "player of the first part, chief actor") or main character is a narrative's central or primary personal figure, who comes into conflict with an opposing major character or force (called the antagonist).[1] The audience is intended to mostly identify with the protagonist. In the theatre of Ancient Greece, three actors played every main dramatic role in a tragedy; the protagonist played the leading role while the other roles were played by the deuteragonist and the tritagonist.

The terms protagonist and main character are variously explained and depending on the source, may denote different concepts.[citation needed] In fiction, the story of the protagonist can be told from the perspective of a different character (who may also but not necessarily, be the narrator). An example would be a narrator who relates the fate of several protagonists - perhaps as prominent figures recalled in a biographical perspective.

Sometimes, a work will offer a particular character as the protagonist, only to dispose of that character unexpectedly, as a dramatic device. Such a character is called a false protagonist. Marion in Alfred Hitchcock's Psycho (1960) is a famous example.

When the work contains subplots, these may have different protagonists from the main plot. In some novels, the protagonists may be impossible to identify, because multiple plots in the novel do not permit clear identification of one as the main plot, such as in Alexander Solzhenitsyn's The First Circle, depicting a variety of characters imprisoned and living in a gulag camp, or in Leo Tolstoy's War and Peace, depicting fifteen major characters involved in or affected by a war.

In psychodrama, the "protagonist" is the person (group member, patient or client) who decides to enact some significant aspect of his life, experiences or relationships on stage with the help of the psychodrama director and other group members; in this case, the protagonist takes supplementary roles as auxiliary egos.