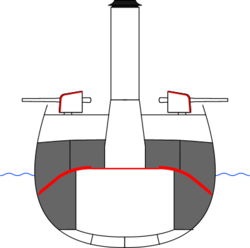 A schematic section of a protected cruiser illustrating the protection scheme. Red lines are the armoured deck and gun shield and grey areas are the protective coal bunkers. Note the deck thickest on the slopes, the upper coal bunker divided longitudinally to allow the outer layer of coal to be maintained while the inner bunker is emptied, and the watertight double-bottom.

The protected cruiser is a type of naval cruiser of the late 19th century, so known because its armoured deck offered protection for vital machine spaces from fragments caused by exploding shells above. Protected cruisers were an alternative to the armoured cruisers, which also had a belt of armour along the sides.

From the late 1850s, navies began to replace their fleets of wooden ships-of-the-line with armoured ironclad warships. However, the frigates and sloops which performed the missions of scouting, commerce raiding and trade protection remained unarmoured. For several decades, it proved difficult to design a ship which had a meaningful amount of protective armour but at the same time was capable of the speed and range required of a 'cruising warship'. The first attempts to do so, armoured cruisers like HMS Shannon, proved to be unsatisfactory, generally being too slow for their cruiser role.

During the 1870s, the increasing power of armour-piercing guns made armouring the sides of a ship more and more difficult, as very thick, heavy armour plates were required. Even if armour dominated the design of the ship, it was likely that the next generation of guns would be able to pierce it. The alternative was to leave the sides of the ship vulnerable, but to armour a deck just below the waterline. Since this deck would only be struck very obliquely by shells, it could be less thick and heavy than belt armour. The ship could be designed so that the engines, boilers and magazines under the armoured deck, and with enough displacement to keep the ship afloat and stable even in the event of damage.[1] Cruisers with armoured decks and no side armour became known as protected cruisers, and eclipsed the armoured cruisers in popularity in the 1880s and into the 1890s.[2]

Shannon was the first warship to incorporate an armoured deck; hers stretched forward from the armoured citadel to the bows. However, Shannon principally relied on her vertical citadel armour for protection. By the end of the 1870s ships could be found with full-length armoured decks and little or no side armour. The Italian Italia class of very fast battleships had armoured decks and guns but no side armour. The British used a full-length armoured deck in their Comus class of corvettes started in 1878; however the Comus class were designed for colonial service and were only capable of 13 knots speed, not fast enough for commerce protection or fleet duties.

The breakthrough for the protected cruiser design came with the Chilean cruiser Esmeralda, designed and built by the British firm Armstrong, at their Elswick yard. Esmeralda had a high speed of 18 knots (dispensing entirely with sails), and an armament of two 10in and six 6in guns. Her protection scheme, inspired by the Italia class, included a full-length protected deck up to 2in thick, and a cork-filled cofferdam along her sides. Esmeralda set the tone for cruiser construction for the years to come, with "Elswick cruisers" on a similar design being constructed for Italy, China, Japan, Argentina, Austria and the United States.[3]

The French Navy adopted the protected cruiser wholeheartedly in the 1880s. The Jeune École school of thought, which proposed a navy composed of fast cruisers for commerce raiding and torpedo-boats for coast defence, was particularly influential in France. The first French protected cruiser was the Sfax, laid down in 1882, and followed by six classes of protected cruiser – and no armoured cruisers.

The British Royal Navy was equivocal about which protection scheme to use until 1887. The large Imperieuse class, begun in 1881 and finished in 1886, were built as armoured cruisers but were often referred to as protected cruisers. While they carried an armoured belt some 10 in thick, the belt only covered a 140 ft of the 315 ft length of the ship, and the belt was also submerged below the waterline at full load. The real protection of the class came from the armoured deck 4 in thick, and the arrangement of coal bunkers to prevent flooding. These ships were also the last armoured cruisers to be designed with sails. However, on trials it became clear that the masts and sails did more harm than good. The masts, sails and rigging were removed and replaced with a single military mast with machine guns.[4]

Around 1910, armour plate began to increase in quality and steam turbine engines, lighter and more powerful than previous reciprocating engines, came into use. Existing protected cruisers became obsolescent as they were slower and less well protected than new ships. Oil fired boilers were introduced, making side bunkers of coal unnecessary but losing the protection they afforded. Protected cruisers were replaced by "light armoured cruisers" with a side armoured belt and armoured decks instead of the single deck, later developed into heavy cruisers. 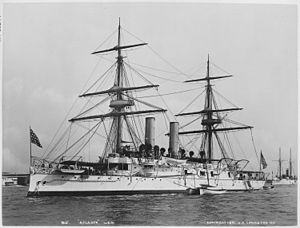 The first protected cruiser of the United States Navy's "New Navy" was the USS Atlanta,[7] launched in October 1884, soon followed by the USS Boston in December, and USS Chicago a year later. A numbered series of cruisers began with Newark (Cruiser No. 1), although Charleston (Cruiser No. 2) was the first to be launched, in July 1888, and ending with another Charleston, Cruiser No. 22, launched in 1904. The last survivor of this series is the USS Olympia (C-6), preserved as a museum ship in Philadelphia.

The reclassification of 17 July 1920 put an end to the U.S. usage of the term "protected cruiser", the existing ships designated as plain "cruisers" with new numbers (so that the armored cruisers could retain their numbers unchanged).[7]

Protected cruisers in the Royal Navy

The introduction of Krupp armour in six inch thickness rendered the "armoured" protection scheme more effective for the largest first class cruisers, and no large first class protected cruisers were built after 1898. The smaller cruisers, unable to bear the weight of heavy armoured belts retained the "protected" scheme up to 1905, when the last units of the Challenger and Highflyer classes were completed. There was a general hiatus in British cruiser production after this time, apart from a few classes of small, fast scout cruisers for fleet duties. When the Royal Navy began building larger cruisers (>4,000 tons) again around 1910, they used a mix of armoured decks and/or armoured belts for protection, depending on class. These modern, turbine powered cruisers are properly classified as light cruisers.

Protected cruisers in the German Navy 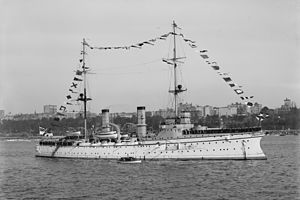 Hertha on a visit to the United States in 1909
Main article: List of protected cruisers of Germany

The German Imperial Navy (Kaiserliche Marine) built a series of protected cruisers in the 1880s and 1890s, starting with the two ships of the Irene class in the 1880s. The Navy only completed two additional classes of protected cruisers, comprising six more ships: the unique Kaiserin Augusta, and the five Victoria Louise-class ships. The type then was superseded by the armored cruiser at the turn of the century, the first of which being Fürst Bismarck. All of these ships tended to incorporate design elements from their foreign contemporaries, though the Victoria Louise class more closely resembled German battleships of the period, which carried lighter main guns and a greater number of secondary guns.[8]

A few protected cruisers have survived as museum ships: