From Infogalactic: the planetary knowledge core
Jump to: navigation, search
For other uses, see Protest (disambiguation).
"Remonstration" redirects here. It is not to be confused with Demonstration. 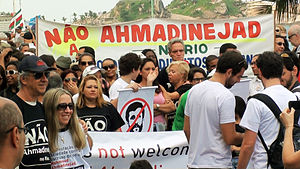 Demonstration against the President of Iran Mahmoud Ahmadinejad during the Rio+20 conference in Brazil, June 2012 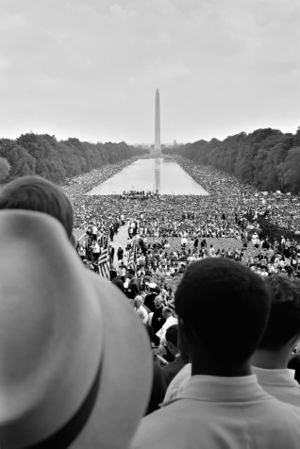 March on Washington for Jobs and Freedom 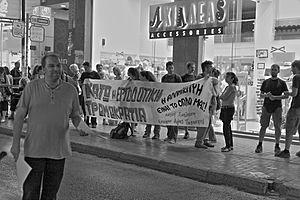 A working class political protest in Greece calling for the boycott of a bookshop after an employee was fired, allegedly for her political activism 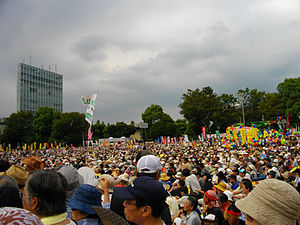 A protest (also called a remonstrance, remonstration or demonstration) is an expression of bearing witness on behalf of an express cause by words or actions with regard to particular events, policies or situations. Protests can take many different forms, from individual statements to mass demonstrations. Protesters may organize a protest as a way of publicly making their opinions heard in an attempt to influence public opinion or government policy, or they may undertake direct action in an attempt to directly enact desired changes themselves.[2] Where protests are part of a systematic and peaceful campaign to achieve a particular objective, and involve the use of pressure as well as persuasion, they go beyond mere protest and may be better described as cases of civil resistance or nonviolent resistance.[3]

Various forms of self-expression and protest are sometimes restricted[4] by governmental policy (such as the requirement of protest permits), economic circumstances, religious orthodoxy, social structures, or media monopoly. One state reaction to protests is the use of riot police. Observers have noted an increased militarization of protest policing, with police deploying armored vehicles and snipers against the protesters. When such restrictions occur, protests may assume the form of open civil disobedience, more subtle forms of resistance against the restrictions, or may spill over into other areas such as culture and emigration. 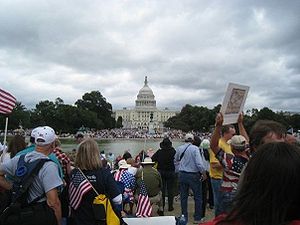 Protesters against big government fill the West Lawn of the U.S. Capitol and the National Mall on September 12, 2009. 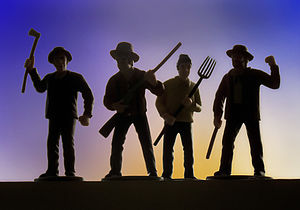 Unaddressed protests may grow and widen into civil resistance, dissent, activism, riots, insurgency, revolts, and political and/or social revolution. Some examples of protests include:

Commonly recognized forms of protest include:

Riots do not count as protests or protected 1st Amendment Speech.[citation needed] 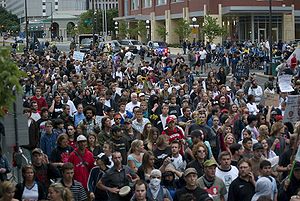 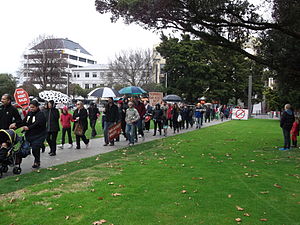 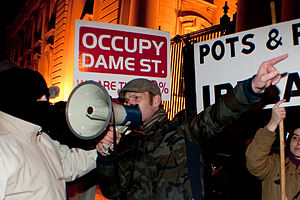 Protesters outside the Oireachtas in Dublin, Republic of Ireland.

Some forms of direct action listed in this article are also public demonstrations or rallies.

Written evidence of political or economic power, or democratic justification may also be a way of protesting.

Protesting against a government

The District of Columbia issues license plates protesting the "taxation without representation" that occurs due to its special status.

Protesting against a military shipment 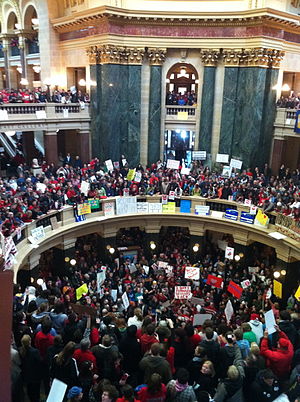 During a sporting event, under certain circumstances, one side may choose to play a game "under protest", usually when they feel the rules are not being correctly applied. The event continues as normal, and the events causing the protest are reviewed after the fact. If the protest is held to be valid, then the results of the event are changed. Each sport has different rules for protests.

By Internet and social networking 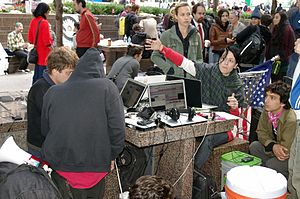 Protesters in Zuccotti Park who are part of Occupy Wall Street using the Internet to get out their message over social networking as events happen, September 2011

Blogging and social networking have become effective tools to register protest and grievances. Protests can express views, news and use viral networking to reach out to thousands of people.

Protests against religious or ideological institutions

Economic effects of protests against companies

A study of 342 US protests covered by the New York Times newspaper in the period 1962 and 1990 showed that such public activities usually had an impact on the company's publicly traded stock price. The most intriguing aspect of the study's findings is that what mattered most was the amount of media coverage the event received. Stock prices fell an average of one-tenth of a percent for every paragraph printed about the event.[13]