"Provinces of Poland" redirects here. You may also be looking for Administrative divisions of Poland. 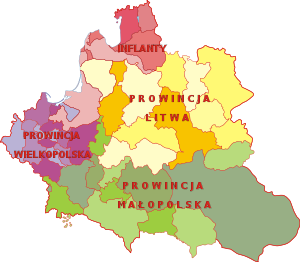 Provinces of the Polish-Lithuanian Commonwealth

A prowincja (Polish pronunciation: [prɔˈvint͡sja]; plural: prowincje) was the largest territorial subdivision in medieval and Renaissance-era Poland, and later in the Polish-Lithuanian Commonwealth. The term designated each of the two largest constituents of the state: depending on the period, including Wielkopolska (Greater Poland), Małopolska (Lesser Poland) and (upon the formation of the Commonwealth) the Grand Duchy of Lithuania. Ducal Prussia was often counted as part of the Greater Poland; Inflanty (Livonia) as part of the Grand Duchy of Lithuania, and the Ruthenian territories were split between Lesser Poland and the Grand Duchy.

Though larger than a voivodship (województwo), the prowincja was less important in terms of offices and power. In most respects, it was merely a titular unit of administration. The real power lay with the voivodship—and, to a lesser extent, with ziemias (lands).

Occasionally the term voviodeship will be misleadingly translated into English as a province, leading to potential confusion.

The Polish term "prowincja" has not been used to denote any part of independent Poland since the Third Partition of the Polish-Lithuanian Commonwealth (1795)—unlike "ziemia", which has continued to be used for certain geographical areas. Since 1795, the Polish word "prowincja" has been used only for certain foreign-imposed units of administration within territories of the old Polish-Lithuanian Commonwealth.