Pskov Oblast (Russian: Пско́вская о́бласть, Pskovskaya oblast) is a federal subject of Russia (an oblast), located in the west of the country. Its administrative center is the city of Pskov. As of the 2010 Census, its population was 673,423.[9]

Pskov Oblast is the westernmost federal subject of contiguous Russia (Kaliningrad Oblast, while located further to the west, is an exclave).[14] It borders with Leningrad Oblast in the north, Novgorod Oblast in the east, Tver and Smolensk Oblasts in the southeast, Vitebsk Oblast of Belarus in the south, and with the countries of Latvia and Estonia in the west. In the northwest, Pskov Oblast is limited by Lake Peipus, which makes up most of the state border with Estonia.[14]

The oblast is located in the Baltic Sea drainage basin, mostly in the basin of the Narva River. The biggest river of this basin is the Velikaya, which flows across the whole oblast from south to north and drains into Lake Peipus. The drainage basin of the Velikaya covers the whole territory of the oblast, with the exception of relatively minor areas in its southern, eastern, and northeastern parts. The rivers in the southeast drain into the Lovat, which has its source in Belarus and crosses Pskov Oblast from south to north, continuing to Novgorod Oblast. The Lovat is a major tributary of Lake Ilmen and is itself in the Neva River's basin. Another tributary of Lake Ilmen is the Shelon River, which flows in the eastern part of the oblast. Finally, minor areas in the south lie in the basin of the Western Dvina. A short stretch of the Western Dvina makes up the border between Pskov and Tver Oblasts.

The north of the oblast is flat and swampy, whereas the central and the southern parts are formed by glacial landscapes. There are many lakes, especially in the south. The biggest one, after Lake Peipus, is Lake Zhizhitskoye, with an area of 51.3 square kilometers (19.8 sq mi). It is located in the southeast of the oblast, in the basin of the Western Dvina.[15] 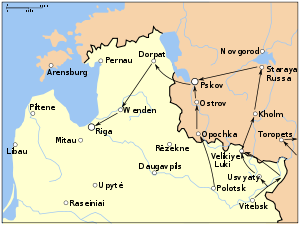 The final period of the Livonian War. The solid line shows the border between Russia (east) and Poland (west) by 1600

Pskov lands had significant importance in Russian history. Pskov itself was first mentioned in chronicles under the year 903, and several versions of the Trade route from the Varangians to the Greeks ran through the current territory of the oblast, along the Velikaya and the Lovat. Until the 1230s Pskov was a principality, and subsequently was subordinated to Novgorod and became a republic, one of the two feudal republics in Rus. In Pskov Republic the highest authority belonged to the assembly of citizens. In 1348, the Treaty of Bolotovo was concluded, recognizing independence of Pskov. However, Pskov quickly run into dependence from the Grand Duchy of Moscow, the emerging regional superpower, and after 1399 Moscow appointed vice-roys to Pskov. The formal independence ended in 1510, when Pskov was occupied by the troops of Vasili III of Russia, the Grand Prince of Moscow.[17] Throughout the history, Pskov Lands were always located in the west of Russian Lands and were almost constantly at war. In particular, in 1242 the Battle of the Ice on Lake Peipus stopped the expansion of the Teutonic Knights to the East. During the Livonian War in 1581, the Polish troops laid siege to Pskov. The areas which now constitute the southern part of the oblast changed hands multiple times, but after the Livonian War found themselves in Poland and stayed there until the First Partition of Poland in 1772. The southeastern part of the oblast was a part of the Principality of Toropets before it was appended to Moscow in the 15th century.

On August 1, 1927 the governorates were abolished, and the area became a part newly established Leningrad Oblast.[22] The southern part was soon split off and went through a number of administrative reforms, being at different times located in Western Oblast, Smolensk Oblast, and Kalinin Oblast. Between autumn of 1941 and spring of 1944, during World War II, the current area of Pskov Oblast was occupied by German troops. In particular, the partisan movement was pretty active in the area. After the liberation, on August 22, 1944, Velikiye Luki Oblast was established, with the center in Velikiye Luki, and on the following day, August 23, 1944, Pskov Oblast was established. In 1945, some areas were transferred from Estonian and Latvian Soviet Socialist Republics to Pskov Oblast, including the town of Pechory. Together, Pskov and Velikiye Luki Oblasts now contained all the areas which currently constitute Pskov Oblast. On October 2, 1957, Velikiye Luki Oblast was abolished and split between Pskov and Kalinin Oblasts, after which the borders of Pskov Oblast did not change. 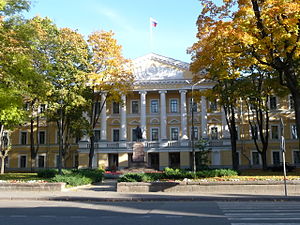 Seat of the Pskov Administration and parliament, House of the Soviets

During the Soviet period, the high authority in the oblast was shared between three persons: The first secretary of the Pskov CPSU Committee (who in reality had the biggest authority), the chairman of the oblast Soviet (legislative power), and the Chairman of the oblast Executive Committee (executive power). Since 1991, CPSU lost all the power, and the head of the Oblast administration, and eventually the governor was appointed/elected alongside elected regional parliament.

The Charter of Pskov Oblast is the fundamental law of the region. The Legislative Assembly of Pskov Oblast is the province's standing legislative (representative) body. The Legislative Assembly exercises its authority by passing laws, resolutions, and other legal acts and by supervising the implementation and observance of the laws and other legal acts passed by it. The highest executive body is the Oblast Government, which includes territorial executive bodies such as district administrations, committees, and commissions that facilitate development and run the day to day matters of the province. The Oblast administration supports the activities of the Governor who is the highest official and acts as guarantor of the observance of the oblast Charter in accordance with the Constitution of Russia.

In the period when they were the most important authority in the oblast (1944 to 1991), the following first secretaries were appointed,[23]

Since 1991, governors were sometimes appointed, and sometimes elected,[24]

The oblast is administratively divided into two cities and towns under the oblast jurisdiction (Pskov and Velikiye Luki) and twenty-four districts. Another twelve towns have the status of the towns of district significance.[26]

According to the 2010 Census, the ethnic composition was:[9]

A notable ethnic minority are the Setos, an ethnic group related to Estonians. Setos are traditionally Orthodox Christians and live in Pechorsky District in the west of the oblast.

Enterprises of electrotechnical industry and food industry in 2009 jointly produced over 50% of the industrial output of the oblast.[35] The two cities with the biggest concentration of industrial enterprises are Pskov and Velikiye Luki.

The main specializations of agriculture in Pskov Oblast are cattle breeding with milk and meat production.[36]

The railway connecting Bologoye and Pskov via Dno and Porkhov crosses the district from east to west. It continues to Pechory and across the border to Tartu, though there is no railway passenger connections between Pskov and Estonia. In Pskov, it crosses another railroad connecting Saint Petersburg with Riga via Plyussa, Ostrov, and Pytalovo. Gdov is connected by railroad with Veymarn via Slantsy. This is a part of the railway which continued south to Pskov, however, the stretch between Gdov and Pskov was destroyed during World War II and never rebuilt. In the south, the railway connecting Moscow with Riga crosses the oblast from east to west, passing through Velikiye Luki, Novosokolniki, and Sebezh. Another railway, running in the east of the oblast in the north-south direction, connects Saint Petersburg via Dno and Novosokolniki with Nevel. In Nevel it splits into two railway lines, both running southeast into Belarus: One line to Vitebsk, and another one to Grodno via Polotsk and Molodechno. Finally, Velikiye Luki is a terminus of the railway line running northeast to Bologoye.

The road network in the oblast is relatively dense, excluding depopulated swampy areas in the east of the oblast. The two most significant highways are the M9 highway which connects Moscow and Riga and runs in the east-west direction, and the M20 highway which connects Saint Petersburg and Kiev, running from north to south. The two highways cross near Pustoshka. A number of road stretches are toll roads. Ostrov is the northern terminus of the European route E262, which proceeds to Kaunas via Rēzekne and Daugavpils.

The oblast is served by airports in Pskov and Velikiye Luki. Pskov Airport (Kresty) serves regular flights to Moscow Domodedovo and Saint Petersburg Pulkovo.[37] These flights are operated by Pskovavia, a local airline.

The very lowest part of the Velikaya is navigable. 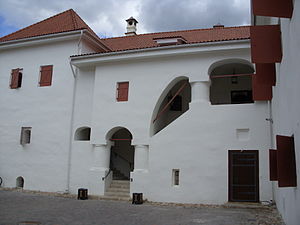 Pskov, similarly to Novgorod, avoided the Mongol invasion of Rus', and therefore it conserved the best examples of Old Russian architecture. The Christ's Transfiguration Cathedral of Mirozhsky Monastery in Pskov, built in the 12th century, contains the 12th-century frescoes, which are extremely rare in Russia. The only other pre-Mongol building is Pskov Oblast is the katholikon of the Ivanovsky Monastery in Pskov, which was constructed in the 1140s and is allegedly the oldest surviving building in the oblast. In Pskov and its immediate surroundings there are several dozens churches built between the end of the 14th and the 17th century. They all have a very simple architecture, painted white from the outside, and most of them have a bellfry constructed just on the main church building. Another architecture feature of Pskov is a resence of a large number of the 17th century living houses (palatas). Pre-18th century civil architecture is extremely rare in Russia, only a handful of building survived, and Pskov contains several dozens of the best samples of this genre.

Pskov for a considerably part of its history was located at the west border of Russia, and therefore the fortification architecture was particularly useful in the area. The best surviving examples are the Pskov Kremlin, the walls and the towers surrounding the historic center of Pskov, the fortress in Izborsk, the Pskov-Caves Monastery in the town of Pechory, and the fortress in Porkhov.

Pskov Governorate happened to be the location of the family estate of Alexander Pushkin, a Russian poet credited with the creation of contemporary Russian language. He spent considerable time at the estate, and once was banished there for two years. In Soviet times, the estate and surrounding areas were transformed into the Mikhaylovskoye Museum Reserve and became a primary tourist attraction. The estate which belonged to the family of the composer Modest Mussorgsky in Kunyinsky District is also preserved as a museum.