From Infogalactic: the planetary knowledge core
Jump to: navigation, search
Not to be confused with Psychiatrist. 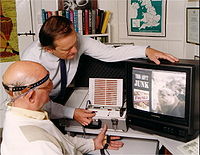 There are many different types of psychologists, as is reflected by the 56 different divisions of the American Psychological Association (APA).[6] Psychologists are generally described as being either "applied" or "research-oriented". The common terms used to describe this central division in psychology are "scientists" or "scholars" (those who conduct research) and "practitioners" or "professionals" (those who apply psychological knowledge). The training models endorsed by the APA require that applied psychologists be trained as both researchers and practitioners,[7] and that they possess advanced degrees.

The minimum requirements for general registration in psychology and to use the title 'psychologist' is an APAC approved four year degree sequence in psychology followed by either: (1) a two-year masters program or (2) two years supervised by a registered psychologist.[1]. Endorsement within a specific area of practice (e.g. clinical, counselling, educational, forensic, health, organizational or neuropsychological) requires additional qualification.[11] These notations are not 'specialist' titles (Western Australian psychologists may use 'specialist' in their titles during a three-year transitional period).[12]

Membership with Australian Psychological Society (APS) differs from registration as a psychologist. The standard route to full membership (MAPS) of the APS technically requires a masters or doctoral degree in psychology in an accredited course. An alternate route is available for academics and practitioners who have gained appropriate experience and made substantial contribution to the field of psychology. Association membership requires four years of APAC accredited undergraduate study.

Restrictions apply to all who want to use the title 'psychologist' in any form in all states and territories of Australia. However, the terms 'psychotherapist', 'social worker', and 'counsellor' are currently self-regulated with several organizations campaigning for government regulation.[13]

In Belgium, the title "psychologist" is protected by law since 1993. It can only be used by people who are included as such on the list of a national government commission. The minimum requirement is a completed five years university training in psychology (Master's degree or equivalent). The title of "psychotherapist" is not legally protected (yet).

In Finland, the title "psychologist" is protected by law. Restriction is governed by National Supervisory Authority for Welfare and Health (Finland). It takes 330 ECTS-credits (about six years) to accomplish the studies.

In Germany, the use of the title 'Diplom-Psychologe' ('Dipl.-Psych.') is restricted by law, and a practitioner is legally required to hold the corresponding academic title, which is comparable to a higher MSc degree and requires at least five years of training at university. With the Bologna-reform, this degree was replaced by a master's degree.[14] The academic degree of Diplom-Psychologe or MSc (Psychologie) does not include a psychotherapeutical qualification, which requires three to five years of additional training. The psychotherapeutical training combines in-depth theoretical knowledge with supervised patient care and self-reflection units. After having completed the training requirements, psychologists take a state-run exam, which, upon successful completion (Approbation), confers the official title of 'psychological psychotherapist' (Psychologischer Psychotherapeut).[15]

In Greece, the title "psychologist" has been protected by law since 1979. It can only be used by people who hold a relevant licence to practice as a psychologist. The minimum requirement is the completion of university training in psychology at a Greek university, or at a university recognized by the Greek authorities.[16]

In the Netherlands, the title of "psychologist" is not restricted by law. The Dutch professional association of psychologists (NIP), using trademark law, therefore posited its own title "Psychologist NIP" (Psycholoog NIP), which is granted exclusively to holders of a master's degree in psychology, after a year of postgraduate experience. The titles "psychotherapist" (psychotherapeut) and "healthcare psychologist" (gz-psycholoog / gezondheidszorgpsycholoog) are restricted through the Individual Healthcare Professions Act (wet BIG) to those who have followed further postgraduate (PsyD/DPsych or Licentiate level) training. The use of the titles "clinical psychologist" (klinisch psycholoog) and clinical neuropsychologist (klinisch neuropsycholoog) is reserved for those who have followed specialist post-licentiate training.

In South Africa,[17] psychologists are qualified in one of Clinical-, Counselling-, Educational-, Organisational- or Research Psychology. To attain the qualification, one must complete a recognised Master's degree in Psychology and an appropriate practicum at a recognised training institution,[18] and also sit an examination set by the Professional Board for Psychology.[19] Registration with the Health Professions Council of South Africa (HPCSA)[20] is required, and includes a Continuing Professional Development component. The practicum usually involves a full year internship, and in some specializations the HPCSA requires completion of an additional year of community service. The Master's comprises seminar- and coursework-based theoretical and practical training, and a dissertation of limited scope, and is (in most cases) two years in duration. Prior to enrolling for the Master’s, the student will have studied psychology for three years as an undergraduate (B.A. or B.Sc., and, for Organisational Psychology, also B.Com.), followed by an additional postgraduate honours degree in psychology; see List of universities in South Africa. Qualification thus requires at least five years of study, and at least one of internship. The undergraduate BPsyc is a four-year program integrating theory and practical training, and — with the required examination set by the Professional Board for Psychology — is sufficient for practice as a psychometrist or counselor.[21]

In Sweden the title "psychologist" is restricted in law. It can only be used after receiving a license from the government. The basic requirements are a completed five years specialised course in psychology (equivalent of a master's degree) and 12 months of practice under supervision. All other uses are banned, though often challenged. "Psychotherapist" follows similar rules but the basic educational demands are another 1.5 years (spread out over three years) at a specialised course in psychotherapy (that do vary a lot concerning theoretical footing), in addition to an academical level degree within a field concerning the treatment of people (psychologist, social worker, psychiatrist a.s.o.). Others than psychologist usually have to complete their education with basic courses in psychotherapy to meet the demands for the applied psychotherapy classes.

A professional in the U.S or Canada must hold a doctorate in psychology (PsyD, Ed.D., or PhD) or have a state license in order to use the title "psychologist". To practice clinically, they must hold a clinical license to practice as a psychologist.[26] The exception to this is the profession of a school psychologist who can be certified by boards of education to practice and use the title "psychologist" with an Education Specialist (Ed.S) degree. The most commonly recognized psychology professionals are clinical and counseling psychologists, those who provide psychotherapy and/or administer and interpret psychological tests. There are state-by-state differences in requirements for academics in psychology and government employees.

Psychologists in the United States have campaigned for legislation changes to enable specially trained psychologists to prescribe psychiatric medicine. New legislation in Louisiana, New Mexico, and Illinois has granted those who take an additional masters program in psychopharmacology permission to prescribe medications for mental and emotional disorders in co-ordination with the patient's physician. Louisiana was the second state to provide such legislation.[27] This legislation has not come without considerable controversy. As of 2009, Louisiana is the only of the United States where the licensing and regulation of the practice of psychology by medical psychologists who prescribe medications is regulated by a medical board (i.e., the Louisiana State Board of Medical Examiners) rather than a board of psychologists.[28] While other states have pursued prescriptive privileges, they have yet to be successful. Similar legislation in the states of Hawaii and Oregon passed through the legislative House and Senate but it was vetoed by the Governor.[27]

In 1989 the U.S Department of Defense was directed to create the Psychopharmacology Demonstration Project. By 1997, ten psychologists were trained in psychopharmacology and granted the ability to prescribe psychiatric medications.[29]

Full membership with the American Psychological Association in United States and Canada requires doctoral training (except in some provinces like Alberta where a master's degree is sufficient). Associate membership requires at least two years of postgraduate studies in psychology or approved related discipline. The minimal requirement for full membership can be waived in certain circumstances where there is evidence that significant contribution or performance in the field of psychology has been made.[30]

In the United States the vast majority of 170,200 psychologist jobs, 152,000 are employed in clinical, counseling, and school positions, 2,300 are employed in industrial-organizational, and 15,900 in "all-other" positions. Opportunities are very limited for bachelor's degree and master's degrees holders, and they will face intense competition in the job market.[1]

Although clinical psychologists and psychiatrists can be said to share a same fundamental aim—the alleviation of mental distress—their training, outlook, and methodologies are often quite different. Perhaps the most significant difference is that psychiatrists are licensed physicians. As such, psychiatrists often use the medical model to assess mental health problems and rely on psychotropic medications as the chief method of addressing mental health problems.[35] Clinical psychologists receive extensive training in psychological test administration, scoring, interpretation and reporting (psychiatrists are not trained in psychological testing and cannot administer Qualification Level C Tests). These tests help to inform diagnostic decisions and treatment planning. For example, in a medical center, a patient with a complicated clinical presentation who is being seen by a psychiatrist might be referred to a clinical psychologist for psychological testing to aid in diagnosis and treatment. In addition, psychologists (particularly those from PhD programs) spend several years in graduate school being trained to conduct behavioral research, including research design and advanced statistical analysis. While this training is available for physicians via dual MD/PhD programs, it is not typically included in medical education. Conversely, psychiatrists, as licensed physicians, have received training more broadly in other areas such as medicine and neurology and may bring this knowledge to bear in identifying and treating medical or neurological conditions that can present similarly to psychiatric diseases.

This audio file was created from a revision of the "Psychologist" article dated 2006-12-17, and does not reflect subsequent edits to the article. (Audio help)
More spoken articles