From Infogalactic: the planetary knowledge core
Jump to: navigation, search
For other uses, see Puja (disambiguation). 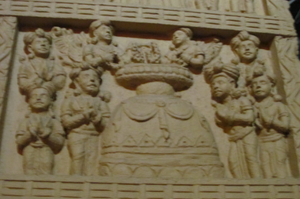 In Buddhism, puja (Sanskrit & Pali: pūjā) are expressions of "honour, worship and devotional attention."[1] Acts of puja include bowing, making offerings and chanting. These devotional acts are generally performed daily at home (either in the morning or evening or both) as well as during communal festivals and Uposatha days at a temple.[2]

In the context of puja, bowing refers to the act of raising one's hands together (anjali) and lowering one's head in a gesture of homage and humility. As a devotional act, one bows to the Buddha's likeness in a statue, to a stupa (a pagoda that enshrines bodily relics of the Buddha) or to the Bodhi tree. Traditionally, one also bows to parents, teachers, the elderly and monastics.[4]

When bowing before a sacred object such as a Buddha statue, one usually bows three times, recalling with the first bow the Buddha, then the Dharma and then the Sangha. One may simply offer a head-lowered bow with palms-together hands held in front of one's heart or forehead, or one may move one's hands in a single flowing movement from the head to the lips to the chest (representing thought, speech and body). More formally, one may bow with a series of head-to-floor prostrations.[5]

Symbolic offerings to the Three Jewels are often made prior to meditation. In front of the Buddha are placed the offerings, which may be just seven bowls of water symbolising the eight hospitalities offered to a guest. Another preferred style of offerings contains illumination, flowers, incense, fruit, music and water for washing and drinking. Each represents another aspect of Buddhist teachings and also the five senses. The flowers for example are a symbol of impermanence and saṃsāra (the cycle of birth, death and rebirth), due to their short life span; unless evergreen is used to show eternity. The candles symbolise enlightenment and the sense of sight while the incense is used to show that Buddhist teachings can be spread across the world just like the smell of the incense, which also purifies the air. As water is a necessity of life, a pure sample is also placed on the shrine to show respect and reverence for life. To show the interdependence of all things and gratitude for that fruit is offered—also as a symbol of taste. A bell is used to indicate when to begin and end puja and to stimulate hearing but also demonstrates the belief of cause and effect and karma. It stimulates hearing and is placed on a lotus-shaped cushion, once again symbolising enlightenment and the cycle of rebirth, as it flowers and seeds at the same time.[citation needed]

Typically performed in traditional languages, such as Pali or Tibetan, Buddhist chants assist in the memorization of early canonical formulae and imbue participants with a sense of solemnity and tranquillity.

Personal devotion usually entails first making an offering to a sacred object (such as placing flowers or fruits before a Buddha image). When making the offering, one bows while reciting traditional phrases identifying the offering. Next, the devotee either bows or prostrates three times to the Three Jewels. While continuing to kneel with palms-together hands held before the heart, the devotee then intones various chants typically starting with paying homage to Gautama Buddha, taking refuge in the Three Jewels and taking the Five Precepts.[6]

In Buddhism's earliest texts, the Pāli Canon, honoring those "worthy" (Pali: arahant)[7] of honor is considered one of the "highest blessings," as reflected in the following words attributed to the Buddha (in English and Pali):