Purcell is often called the "Quarterhorse Capital of the World" and its official motto is "Heart of Oklahoma"; the city has registered trademarks on both titles.[7]

Purcell was founded as a railroad town in 1887, with the coming of the Atchison, Topeka and Santa Fe. Amtrak still serves the town with the Heartland Flyer at the station near the old Santa Fe depot. Purcell was at the north end of the Gulf, Colorado and Santa Fe Railway, owned by the ATSF. Located on the Canadian River, it was called the "Queen City of the Chickasaw Nation."[6]

Purcell was the only town on the border of the Unassigned Lands, and began attracting hopeful settlers even before the Land Run of 1889. Town lots went on sale April 5, 1887, and a post office was established 16 days later. Residents elected the town's first mayor, James Taylor Bradley, on August 13, 1895. The town was incorporated on October 3, 1898.[6]

In 1895, one of the five district courts of the Chickasaw Nation was located in Purcell, with the first session opening November 18, 1895. The court house escaped destruction the next day, when a fire destroyed most of the buildings in the business district.[6]

Construction of the Oklahoma Central Railway, which would connect the Lehigh coal mines with Chickasha, reached Purcell in March 1907. The OCR located its main yards, barns and most of its equipment in Purcell. Although the OCR went bankrupt in the following year, its assets were acquired by the ATSF[8] According to the U.S. Census Bureau, the city has a total area of 10.5 square miles (27.2 km2), of which 10.1 square miles (26.1 km2) is land and 0.46 square miles (1.2 km2), or 4.33%, is water.[9]

Purcell is located along the I-35 Corridor in the central part of the state, on a bluff overlooking the Canadian River valley within the Interior Plains region. It is 13 miles (21 km) south of Norman.[6] The view from atop Purcell's Red Hill offers a scenic glimpse at both the South Canadian River and the University of Oklahoma campus in neighboring Norman.

The central core of Purcell is located at the intersection of US-77 and OK-74/OK-39. Access to I-35 is at the north and south ends of the town.

Prior to the construction of I-35, this route of US-77 was the heavily traveled road from Oklahoma City to Dallas.

There were 2,120 households out of which 33.9% had children under the age of 18 living with them, 54.1% were married couples living together, 13.0% had a female householder with no husband present, and 29.2% were non-families. 26.2% of all households were made up of individuals and 13.0% had someone living alone who was 65 years of age or older. The average household size was 2.54 and the average family size was 3.06.

Purcell is a member of the Heart of Oklahoma Chamber of Commerce, and is at the center of a micropolitan trade area which includes the communities of Goldsby, Lexington, Washington, and Wayne.[12] Several small businesses and banks are located in Purcell, including a Walmart Supercenter.[13] Purcell has historically served as an agribusiness area and a center for Oklahoma's equestrian industry.[14] Purcell is the site of the first planned double-wide trailer park with underground utilities, paved roads, greenbelts and other amenities, according to the Oklahoma Department of Commerce. Large area employers include: Oklahoma Department of Corrections at 2 nearby prison facilities, Tinker Air Force Base in Midwest City, Purcell Public Schools, and The City of Purcell (which operates electric, water and sewer service). 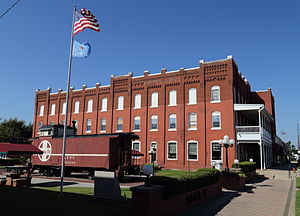 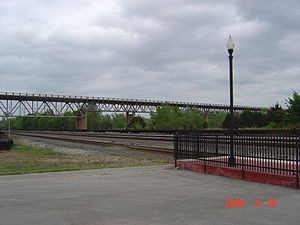 Purcell's downtown business district and its many historic buildings underwent major improvements and revitalization at a cost of over $1 million in the 1990s via the "U.S. Main Street" program. The improvements included new sidewalks, Victorian lamp posts, storefront restorations, and landscape islands in the downtown area.

Purcell has three listings on the National Register of Historic Places:

Purcell's train station is located at the lower level of the hill at east Main Street, and has daily rail service provided by Amtrak's Heartland Flyer north to Norman and Oklahoma City, and south to Pauls Valley, Ardmore, Gainesville, and Fort Worth. In Fort Worth, passengers can connect to Amtrak's Texas Eagle. Interstate 35 runs north–south on the west edge of Purcell. The town is also served by U.S. Highway 77, State Highway 39, and State Highway 74.[15] In addition, ODOT maintains State Highway 77C in downtown Purcell, a route which is not marked.[16]

Stephen Shephard Memorial Purcell Airport. Renamed from Purcell Municipal Airport in 2005 to honor a Purcell High School alumnus who became a U.S. pilot and flight instructor and lost his life in the Iraq War.

Purcell has two local medical facilities, Purcell Municipal Hospital, a 50 bed full service hospital offering acute care and emergency room, is located on the north side of the city. PMH is owned by the City of Purcell and operated by the Purcell Hospital Authority. The hospital was once managed by HCA-Presbyterian Health Care Systems, and more recently a referral arrangement and joint management agreement was awarded to Saint Anthony Hospital of Oklahoma City