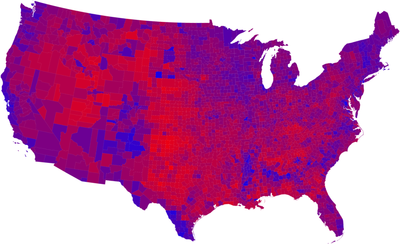 The phrase Purple America refers to the belief that a more detailed analysis of the voting results of recent United States national elections reveals that the U.S. electorate is not as polarized between "Red" America (Republican) and "Blue" America (Democratic) as is often depicted in news analysis. The term reflects the fact that news organizations generally use the colors red and blue on maps to indicate when a state or congressional district has been won by a Republican or Democratic candidate, respectively. Because the American political system often awards a state or congressional district entirely to one candidate ("winner take all") without regard to the margin of victory, it results in a map that does not reflect the true distribution of "red" or "blue" votes across the nation. The distortions contained in these maps, the argument goes, contribute to the misperception that the electorate is highly polarized by geography.

Robert Vanderbei at Princeton University made the first Purple America map after the 2000 presidential election. It attempts to reflect the margin of victory in each county by coloring each with a shade between true blue and true red. In light of the general absence of overwhelming victories, this technique results in mostly shades. This map was reprinted in US News & World Report a few months prior to the 2004 election. After the 2004 election, Vanderbei and then others made similar maps summarizing the results. Quickly thereafter, the term Purple America permeated the political blogosphere and entered the public lexicon as a way of stating that the United States is not as divided as the political pundits would have the people believe.

Cartograms developed by Gastner, Shalizi, Newman[1] at the University of Michigan provide another way to depict election results.