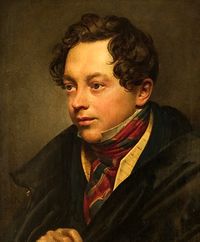 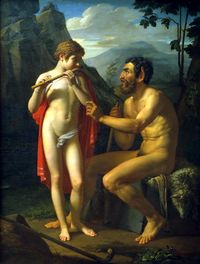 He studied at the Imperial Academy of Arts under Vasily Shebuyev.[1] After graduating, he spent the next eleven years in Rome on a fellowship, which he was given for his painting of Christ driving the money changers from the Temple.[2] While there, he created almost 100 works.

Upon his return to Saint Petersburg in 1830, he was made an Academician for his portrayal of Socrates saving Alcibiades.[1] The painting itself required some saving, as the ship carrying it from Rome was wrecked, causing water damage, and it had to be reconstructed on its arrival. [2] After that, he began teaching and was appointed a Professor in 1836,[1] a position he held until 1869 when he became a Professor Emeritus and State Councilor.[2] He lost his eyesight in 1870.[3]

During the time he was a Professor, he created numerous portraits and allegorical scenes for the restoration of the Winter Palace after the disastrous fire in 1837,[3] but his religious works are the most familiar. They include forty paintings and icons for Saint Isaac's Cathedral.

He is mentioned in a story ("The Artist") by Taras Shevchenko. His best-known student was Nikolai Ge.