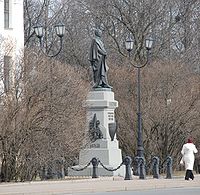 Statue of Pyotr Pakhtusov in Kronstadt.

Between 1832 and 1835 Pakhtusov undertook two exploratory journeys to Novaya Zemlya. He wintered on the island on the two occasions and took detailed meteorological observations.

Pakhtusov carefully surveyed the southern and eastern parts of Novaya Zemlya along with fellow explorer and cartographer Avgust Tsivolko during the last two years of the expedition. Thanks to their work the first reliable maps of Novaya Zemlya's southern shores and part of the northern island's coastline, were published.

A small island in the eastern shore of Novaya Zemlya and a group of islands in the Nordenskiöld Archipelago are named after Pyotr Kuzmich Pakhtusov. His feat as a scientist and researcher was immortalized in 1886. Colleagues of Pakhtusov and expedition members had initiated the creation of this monument in Kronstadt.