The Ordnance QF 4.5-inch howitzer was the standard British Empire field (or ‘light’) howitzer of the First World War era. It replaced the BL 5-inch howitzer and equipped some 25% of the field artillery. It entered service in 1910 and remained in service through the interwar period and was last used in the field by British forces in early 1942. It was generally horse drawn until mechanisation in the 1930s.

The QF 4.5-inch howitzer was used by British and Commonwealth forces in most theatres, by Russia and by British troops in Russia in 1919. Its calibre (114 mm) and hence shell weight were greater than those of the equivalent German field howitzer (105 mm); France did not have an equivalent. In the Second World War it equipped some units of the BEF and British, Australian, New Zealand and South African batteries in East Africa and the Middle and Far East.

During the Second Boer War (1899–1902) the British government realised its field artillery was being overtaken by the more modern "quick firing" guns and howitzers of other major powers. The Krupp field howitzers used by the Boers had particularly impressed the British. The usefulness of field howitzers and the need for them to form part of an infantry division’s artillery were reinforced by reports from the Russo-Japanese War in 1904. In 1900, the British Cabinet ordered Field Marshal Lord Roberts, the commander-in-chief in South Africa, to send home artillery brigade and battery commanders “selected for their eminence and experience” to form an equipment committee. The committee was chaired by General Sir George Marshall, who had been artillery commander in South Africa.[1] It formed in January 1901 with wide ranging terms of reference concerning artillery equipment from guns and howitzers to harness design and instruments.[2]

The committee swiftly established requirements and invited proposals from British gun makers. None were satisfactory, and all compared poorly with a captured Krupp 12 cm howitzer. A purchase of Krupp howitzers was discussed, including visits to Essen. However, by 1905, the committee was sufficiently satisfied to recommend the production of trial equipments from ordnance factories, Armstrong, Vickers and the Coventry Ordnance Works (a joint venture by several Coventry engineering companies). Testing in 1906 showed the Coventry design was by far the most satisfactory and a battery’s worth were ordered for trials. In 1908, after trials, the 4.5-inch howitzer was recommended for service, albeit with a shortened barrel.[3]

The 4.5-inch howitzer was used on most fronts during the First World War. On the Western Front its normal scale was one battery to every three batteries of 18-pounders. Initially 4.5-inch howitzers equipped a howitzer brigade of the Royal Field Artillery in each infantry division. In the original British Expeditionary Force in 1914 this brigade had three batteries each with six howitzers. Subsequent batteries had only four howitzers. In 1916 all batteries on the Western Front began to be increased to six howitzers and later that year the howitzer brigades were disbanded and a howitzer battery added to each field brigade of the RFA as the fourth battery. This organisation continued between the wars.

The weapon remained in service during the inter-war period and was used in various campaigns. Apart from changes to ammunition the howitzer itself remained unchanged except for carriage modifications to enable mechanisation.

During the Second World War they served with the British Expeditionary Force in France and although many were lost they were the most widely available artillery piece until 25-pounder production developed. They were used in the Middle and Far East theatres as well as for training and were gradually replaced by the 25-pounder.

QF stands for "quick firing", a British term for ordnance that fires ammunition with a metal (usually brass) cartridge case containing the propellant charge. The cartridge case also provides obturation, or sealing of the chamber. This howitzer was the largest calibre of British QF field artillery ordnance.

Apart from extensive experimentation with shell and rifling designs, two problems slowed development; both were howitzer-specific issues. The first was the need for an adjustable quick firing recoil system to prevent the breech striking the ground when fired at high elevation angles. The second was the suitable design for a range scale in yards able to accommodate a choice of propelling charges. The first was solved by use of a “cut-off gear” that allowed 40 inches of recoil when the barrel was horizontal but only 20 inches when it was at 45 degrees. The second led to the range scale being designed for charge four and a “range rule” provided to convert the actual range for other charges to a false range set on the charge four scale.

The gun carriage was designed to be towed behind a limber and six horses; the lower carriage comprised a box trail. The QF 4.5 fired a separate round (i.e. shell and cartridge were loaded separately). The barrel was of built-up type, with a horizontal sliding block breech. A limited traverse saddle supported the elevating mass and a shield. It was designed for one-man laying with both traverse and elevation controls and sights on the left. The recoil system was below the barrel and used a hydraulic buffer with a hydro-pneumatic recuperator to return the barrel to its firing position.

Originally fitted with rocking bar open sights including a deflection scale and a strip elevation, by 1914 the number seven dial sight in carrier number seven dial sight number one had been introduced. This carrier was reciprocating (i.e. it could be cross-levelled), it had an integral elevation scale drum and a mounting for the sight clinometer (used for the angle of sight).[4] The number seven dial sight was a modified version of the German Goertz panoramic sight. The only changes to the ordnance, creating the Mark II in 1917, had a reduced twist in the rifling (from 1:15 to 1:20) and changes to correct design defects in the breech to reduce the effect of firing stresses.

From the 1920s the carriage was upgraded; first to Mk 1R (solid rubber tyres) then to Mk 1P (new wheels, axles, brakes and pneumatic tyres) for vehicle towing. Two versions of this appeared; in one stub axles were fitted below the original axle, later an entirely new axle was introduced. The similarly wheeled No. 26 artillery trailer was introduced to replace the limber. Unlike most other guns and howitzers in British service, calibrating Probert sights were not fitted to the 4.5-inch howitzer.

By the outbreak of war in 1914, 192 guns had been produced, 39 being for imperial forces, which was less than ordered.[5] Coventry Ordnance Works was the main supplier, with Ordnance Factory Woolwich producing substantial numbers. Other suppliers of complete equipments were Bethlehem Steel and, before the outbreak of war, a small number from Vickers. The Austin Motor Company produced some carriages. Total wartime production was 3384 guns (i.e. barrels) and 3437 carriages. Four-hundred 4.5-inch howitzers were supplied to Russia from 1916–17.[6] 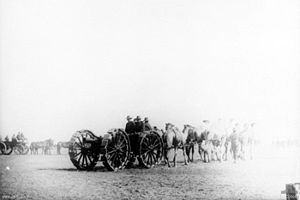 The QF 4.5 served throughout the Great War, principally with the Royal Field Artillery, beginning with 182 guns in 1914, with 3,177 more produced during the war.

At the beginning of the First World War a brigade of three six-gun howitzer batteries was part of each British infantry division. In February 1917, divisional artilleries were consolidated into two field brigades each with three batteries (A, B, C) of 18-pounder guns and one battery (D) of 4.5-inch howitzers. The balance were formed into army field brigades with the same organisation.

Following experience gained in the Battle of the Somme in the summer of 1916, its role on the Western Front was defined in January 1917 as "neutralising guns with gas shell, for bombarding weaker defences, enfilading communications trenches, for barrage work, especially at night, and for wire cutting in such places which the field guns could not reach".[7]

During advances such as at Messines in June 1917, the gun was typically employed in "standing barrages" of HE on the enemy forward positions ahead of the 18-pounders' creeping barrage, and gas shelling following bombardments.[8]

The 4.5-inch howitzers were also used by British batteries in the campaigns in Gallipoli, the Balkans, Palestine, Italy and Mesopotamia.

Several batteries of 4.5-inch howitzers arrived in North Russia shortly before the armistice on the Western Front and remained there through much of 1919.[10]

In 1919, small numbers were used in the Third Anglo-Afghan War,[11] the Waziristan Campaign,[12] and in Mesopotamia from 1920–21 to suppress the Iraqi revolt against the British.[10] 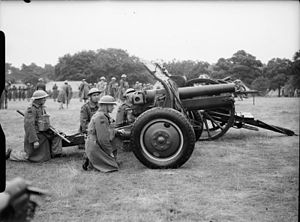 The 4.5-inch howitzers equipped some batteries of the British Expeditionary Force in France in 1940. Ninety-six were lost, leaving 403 in world-wide service (only 82 outside UK) with the British Army, plus those held by Australia, Canada, New Zealand and South Africa. The British holdings were expected to increase to 561 by August 1940 due to the completion of reconditioning and repairs.

In the Far East in 1941, 4.5-inch howitzers equipped some British and Australian batteries in Malaya, and a troop in each mountain battery in Hong Kong. The 4.5s of the 155th (Lanarkshire Yeomanry) Field Regiment were instrumental in holding back Japanese attacks at the Battle of Kampar, in late December 1941. The last operational use of 4.5 by the British Army was in early 1942 in Malaya.[15] They were withdrawn from field formations in 1943 and declared obsolete in 1944 when ammunition stocks ran out.[16]

The QF 4.5 survived in use with the Irish Army until the 1960s. They were fired by the FCA (An Fórsa Cosanta Áitiúil – local defence force) on the Glen of Imaal firing range, County Wicklow circa 1976. Some retired examples exist today, such as those preserved at Collins Barracks, Cork and two in Aiken Barracks, Dundalk. 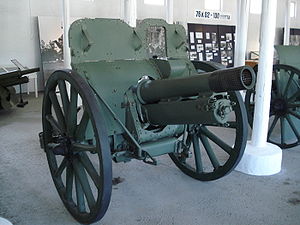 1916 model used by Finland, at the Hämeenlinna Artillery Museum 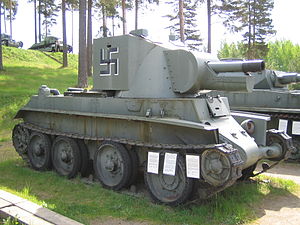 The Portuguese Army used the QF 4.5 in combat in the Western Front, during the First World War. The howitzer was received in 1917, to equip the Portuguese Expeditionary Corps (CEP) sent to the Western Front, as part of the Portuguese effort in support to the Allies. In the CEP, the howitzer was designed to equip the fourth batteries of each of the field artillery battalions, the other three batteries in each battalion being equipped with 75 mm quick firing guns.

In Portugal, the QF 4.5 was officially designated Obus 11,4 cm TR m/1917 and received the nickname "bonifácio". It remained in service until the 1940s. 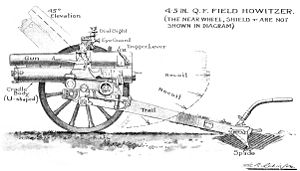 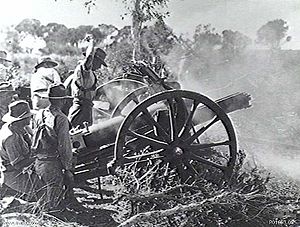 The 4.5-inch ammunition was separate loading, the shell and cartridge were loaded separately, with charge bags being removed from the cartridge as necessary. The full charge was charge five, i.e. the cartridge case had an irremovable charge (one) and four incremental bags. Shells were delivered fuzed. In 1914 the ammunition scale for 4.5-inch howitzers was 70% shrapnel and 30% HE. New types of shell were introduced during the First World War. These were chemical at the end of 1915, incendiary shells in 1916 and smoke shells in 1917. Smoke shells were phosphorus filled with both steel and cast iron bodies. A new streamlined shell (HE Mk 1D) was also introduced to increase maximum range from 6600 yards of the older three CRH (calibres radius head) models to 7300 yards. 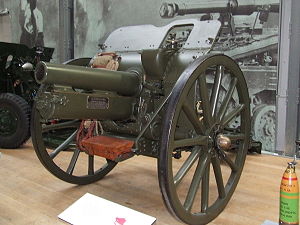