From Infogalactic: the planetary knowledge core
Jump to: navigation, search
This article is about the Semitic letter. For the band, see Qoph (band).

Qoph or Qop is the nineteenth letter of the Semitic abjads, including Phoenician Qōp

, Syriac Qōp̄ ܩ, and Arabic Qāf ق (in abjadi order). Its sound value is an emphatic [kˤ] or [q]. In Hebrew gematria, it has the numerical value of 100.

The origin of qoph is uncertain. It is usually suggested to have originally depicted either a sewing needle, specifically the eye of a needle (the Hebrew קוף means "hole"), or the back of a head and neck (qāf in Arabic meant "nape").[1] According to an older suggestion, it may also have been a picture of a monkey and its tail.[2]

The Oxford Hebrew-English Dictionary gives the letter Qoph a transliteration value of q or k; and, when word-final, it may be transliterated as ck. The normal English spellings of Biblical names containing this letter may represent it as C or K, e.g. Cain for Hebrew Qayin, or Kenan for Qenan (Genesis 4:1, 5:9).

In modern Israeli Hebrew the letter is also called kuf. The letter represents /k/; i.e., no distinction is made between Qof and Kaph. However, many historical groups have made that distinction, with Qof being pronounced [q] by Iraqi Jews and other Mizrahim, or even as [ɡ] by Yemenite Jews under the influence of Yemeni Arabic.

Qof in gematria represents the number 100. Sarah is described in Genesis Rabba as בת ק' כבת כ' שנה לחטא, literally "At Qof years of age, she was like Kaph years of age in sin", meaning that when she was 100 years old, she was as sinless as when she was 20.

After a child says something false, one might retort: "B'Shin Qoph, Resh" (with Shin, Qoph, Resh). These letters spell sheqer, which is the Hebrew word for a lie. It would be akin to an English speaker saying "That's an L-I-E."

The letter ق is named قاف qāf and is written in several ways depending on its position in the word:

It is usually transliterated into Latin script as q, though some scholarly works use ḳ.[3]

According to Sibawayh, author of the first book on Arabic grammar, the letter is pronounced as a voiced phoneme.[4] As noted above, Modern Standard Arabic has the voiceless uvular plosive /q/ as its standard pronunciation of the letter, but dialectical pronunciations vary as follows:

This variance has led to the confusion over the spelling of Libyan leader Muammar al-Gaddafi's name in Latin letters. In Western Arabic dialects the sound [q] is more preserved but can also be sometimes pronounced [ɡ] or as a simple [k] under Berber and French influence. 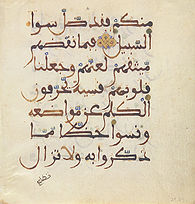 The Maghribi text renders qāf and fāʼ differently than elsewhere would:

The Maghrebi style of writing qāf is different: having only a single point (dot) above; when the letter is isolated or word-final, it may sometimes become unpointed.[5]

The earliest Arabic manuscripts show qāf in several variants: pointed (above or below) or unpointed.[6] Then the prevalent convention was having a point above for fāʼ and a point below for qāf; this practice is now only preserved in manuscripts from the Maghribi,[7] with the exception of Libya and Algeria, where the Mashriqi form (two dots above: ق) prevails.

Within Maghribi texts, there is no possibility of confusing it with the letter fāʼ, as it is instead written with a dot underneath (ڢ‎) in the Maghribi script.[8]

In Persian, the letter is pronounced [ɣ]~[ɢ].