The Quasi-War (French: Quasi-guerre) was an undeclared naval war fought from 1798 to 1800 between the United States and the French First Republic, primarily in the Caribbean and off the East Coast of the United States. The ability of Congress to authorize military action without a formal declaration of war was later confirmed by the Supreme Court and formed the basis of many similar actions since, including American participation in the Vietnam War and 1990 Gulf War.[2][lower-alpha 1]

In 1793, Congress suspended repayments of French loans incurred during the American Revolutionary War. The dispute escalated further due to different interpretations of the 1778 treaties of Alliance and Commerce between the two countries. France, then engaged in the 1792–1797 War of the First Coalition, which included Great Britain, viewed the 1794 Jay Treaty between the United States and Britain as incompatible with those treaties, and retaliated by seizing American ships trading with Britain.

Diplomatic negotiations failed to resolve these differences, and in October 1796 French privateers began attacking all merchant ships in American waters. The dissolution of Federal military forces following independence left the US unable to mount an effective response and by October 1797, over 316 American ships had been captured. In March 1798, Congress re-established the United States Navy and in July authorized the use of military force against France.

In addition to a number of individual ship actions, by 1799 American losses had been significantly reduced through informal cooperation with the Royal Navy, whereby merchant ships from both nations were allowed to join each other's convoys. Diplomatic negotiations between the US and France continued; the establishment of the French Consulate in November 1799 led to the Convention of 1800, which ended the war.

Under the Treaty of Alliance (1778), the United States had agreed to protect French colonies in the Caribbean in return for their support in the American Revolutionary War. As the treaty had no termination date, France claimed this obligation included defending them against Great Britain and the Dutch Republic during the 1792 to 1797 War of the First Coalition. Despite popular enthusiasm for the French Revolution, especially among anti-British Jeffersonians, there was little support for this in Congress. Neutrality allowed New England shipowners to earn huge profits evading the British blockade, while Southern plantation-owners feared the example set by France's abolition of slavery in 1794.[3]

In 1793, Congress suspended repayment of French loans incurred during the Revolutionary War, arguing the execution of Louis XVI and establishment of the French First Republic rendered existing agreements void. They further argued American military obligations under the Treaty of Alliance applied only to a "defensive conflict" and thus did not apply, since France had declared war on Britain and the Dutch Republic. To ensure the US did not become involved, Congress passed the Neutrality Act of 1794, while President George Washington issued an Executive Order forbidding American merchant ships from arming themselves.[4] France accepted these acts, but on the basis of 'benevolent neutrality', which they interpreted as allowing French privateers access to US ports, and the right to sell captured British ships in American prize courts, but not vice versa. However, the US viewed 'neutrality' as the right to provide the same privileges to both.[5] 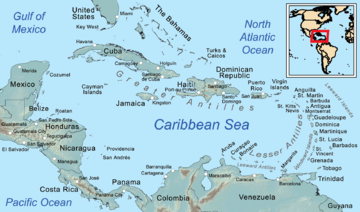 Caribbean, main focus of operations during the Quasi-War

These differences were further exacerbated in November 1794 when the US and Britain signed a new trade agreement, which contradicted the 1778 Commercial Treaty granting France most favoured nation status. The Jay Treaty resolved outstanding issues from the American Revolution, and expanded trade between the two countries; between 1794 and 1801, American exports to Britain nearly tripled in value, from US$33 million to $94 million.[6]

As a result, in late 1796 French privateers began seizing American ships trading with the British. An effective response was hampered by the almost complete lack of a United States Navy; driven by Jeffersonian opposition to Federal institutions, its last warship had been sold in 1785, leaving only a small flotilla belonging to the United States Revenue Cutter Service and a few neglected coastal forts. This allowed French privateers to roam virtually unchecked; from October 1796 to June 1797, they captured 316 ships, 6% of the entire American merchant fleet, causing losses of $12 to $15 million.[7]

Efforts to resolve this through diplomacy ended in the 1797 dispute known as the XYZ Affair.[8] However, it created support for establishing a limited naval force, and on June 18, President John Adams appointed Benjamin Stoddert the first Secretary of the Navy.[9] On July 7, 1798, Congress approved the use of force against French warships in American waters, but wanted to ensure conflict did not escalate beyond these strictly limited objectives.[10] As a result, it was called a "limited" or "Quasi-War" and led to political debate over whether it was constitutional. A series of rulings by the Supreme Court of the United States established its legality and confirmed the ability of the US to conduct undeclared war or "police actions".[11] 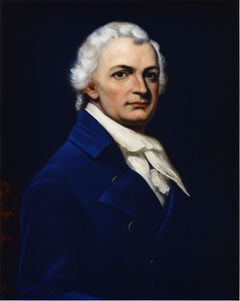 Since battleships were expensive to build and required highly specialised construction facilities, in 1794 Congress compromised by ordering six large frigates. By 1798, the first three were nearly complete and on July 16, 1798, additional funding was approved for the USS Congress, USS Chesapeake, and USS President, plus the frigates USS General Greene and USS Adams. The provision of naval stores and equipment by the British allowed these to be built relatively quickly, and all saw action during the war.[12]

The US Navy was further reinforced by so-called 'subscription ships', privately funded vessels provided by individual cities. These included five frigates, among them the USS Philadelphia, commanded by Stephen Decatur, and four merchantmen converted into sloops. Primarily intended to attack foreign shipping, these were noted for their speed, and earned huge profits for their owners; the USS Boston captured over 80 enemy vessels, including the French corvette Berceau.[13]

With most of the French fleet confined to home ports by the Royal Navy, Secretary Stoddert was able to concentrate his forces against the limited number of frigates and smaller vessels that evaded the blockade and reached the Caribbean. The other need was for convoy protection, and while there was no formal agreement with the British, there was considerable co-operation at a local level. The two navies shared a signal system, and allowed their merchantmen to join each other's convoys, mostly of which were provided by the British, who had four to five times more escorts available.[14]

This allowed the US Navy to concentrate on attacking French privateers, most of very shallow draft and armed with between one and twenty guns. Operating from French and Spanish bases in the Caribbean, particularly Guadeloupe, they made opportunistic attacks on passing ships, before escaping back into port. To combat this, the US used similar sized vessels from the United States Revenue Cutter Service, as well as commissioning their own privateers. The first American ship to see action was the USS Ganges, a converted East Indiaman with 26 guns; most were far smaller.[15]

The Revenue cutter USS Pickering, commanded by Edward Preble, made two cruises to the West Indies and captured ten prizes. Preble turned command of Pickering over to Benjamin Hillar, who captured the much larger and more heavily armed French privateer l'Egypte Conquise after a nine-hour battle. In September 1800, Hillar, Pickering, and her entire crew were lost at sea in a storm.[16] Preble next commanded the frigate USS Essex, which he sailed around Cape Horn into the Pacific to protect U.S. merchantmen in the East Indies. He recaptured several U.S. ships that had been seized by French privateers.[17][18]

For various reasons, the role of the Royal Navy was minimised both at the time and later; the first significant study of the war by US naval historian Gardner W. Allen in 1909 focused exclusively on ship to ship actions, and this is how the war is often remembered.[19] However, historian Michael Palmer argues American naval operations cannot be understood in isolation and when operating in the Caribbean,

...they entered a European theater where the war had been underway since 1793. The Royal Navy deployed four to five times more men-of-war in the West Indies than the Americans. British ships chased and fought the same French cruisers and privateers. Both navies escorted each other's merchantmen. American warships operated from British bases. And most importantly, British policies and shifts in deployment had dramatic effects on American operations.[20]

From the perspective of the US Navy, the Quasi-War consisted of a series of ship to ship actions in US coastal waters and the Caribbean; one of the first was the Capture of La Croyable on 7 July 1798, by Delaware outside Egg Harbor, New Jersey.[21] On 20 November, a pair of French frigates, Insurgente and Volontaire, captured the schooner USS Retaliation, commanded by Lieutenant William Bainbridge; Retaliation would be recaptured on 28 June 1799.

On 9 February 1799, the frigate Constellation captured the French Navy's frigate L'Insurgente and severely damaged the frigate La Vengeance, largely due to Captain Thomas Truxtun's focus on crew training[citation needed]. By 1 July, under the command of Stephen Decatur, USS United States had been refitted and repaired and embarked on its mission to patrol the South Atlantic coast and West Indies in search of French ships which were preying on American merchant vessels.[22] 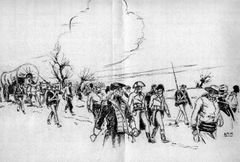 On 1 January 1800, a convoy of American merchant ships and their escort, United States naval schooner USS Experiment, engaged a squadron of armed barges manned by French-allied Haitians known as picaroons off the coast of present-day Haiti. On 1 February, the American frigate USS Constellation unsuccessfully tried to capture the French frigate La Vengeance off the coast of Saint Kitts. In early May, Captain Silas Talbot organized a naval expedition to Puerto Plata on the island of Hispaniola in order to harass French shipping, capturing the Spanish coastal fort at Puerto Plata and a French corvette. Following the French invasion of Curaçao in July, the American sloops USS Patapsco and USS Merrimack began a blockade of the island in September that led to a French withdrawal. On 12 October, the frigate Boston captured the corvette Le Berceau.[23]

By late 1800, the United States Navy and the Royal Navy, combined with a more conciliatory diplomatic stance by the government of First Consul Napoleon Bonaparte, had reduced the activity of the French privateers and warships. The Convention of 1800, signed on 30 September, ended the Quasi-War. It affirmed the rights of Americans as neutrals upon the sea and abrogated the alliance with France of 1778. However, it failed to provide compensation for the $20 million "French Spoliation Claims" of the United States. The agreement between the two nations implicitly ensured that the United States would remain neutral toward France in the wars of Napoleon and ended the "entangling" French alliance.[25] This alliance had been viable only between 1778 and 1783.[26]