Queen's University Belfast (informally Queen's or QUB) is a public research university in Belfast, Northern Ireland.[note 1] The university was chartered in 1845, and opened in 1849 as "Queen's College, Belfast", but has roots going back to 1810 and the Royal Belfast Academical Institution.[4]

The university forms the focal point of the Queen's Quarter area of the city, one of Belfast's four cultural districts. It offers academic degrees at various levels and across a broad subject range, with over 300 degree programmes available.[5] Since 1 March 2014 Patrick Johnston has been the university’s 12th President and Vice-Chancellor. Its Chancellor is Thomas Moran.

Queen's University Belfast has its roots in the Belfast Academical Institution, which was founded in 1810, one of the United Kingdom's 10 oldest universities, and remains as the Royal Belfast Academical Institution.[4] The present university was first chartered as "Queen's College, Belfast" in 1845, when it was associated with the simultaneously founded Queen's College, Cork, and Queen's College, Galway, as part of the Queen's University of Ireland – founded to encourage higher education for Catholics and Presbyterians, as a counterpart to Trinity College, Dublin, then an Anglican institution.[4] Queen's College, Belfast, opened in 1849.[4] Its main building, the Lanyon Building, was designed by the English architect, Sir Charles Lanyon. At its opening, it had 23 professors and 343 students.[citation needed]. Some early students at Queen's University Belfast took University of London examinations.[6] 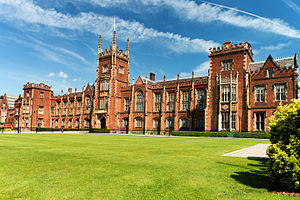 On 20 June 2006 the university announced a £259 million investment programme focusing on facilities, recruitment and research.[7] One of the outcomes of this investment has been a new university library; the McClay library was designed by Boston-based architects Sheply, Bulfinch, Richardson & Abbott, working in association with Belfast architects, Robinson Patterson Partnership, and opened in July 2009. The building has been named in honour of Sir Allen McClay, a major benefactor of Queen's University and of the Library.[8]

In June 2010, the university announced that they would be launching a £7.5m Ansin international research hub with Seagate Technologies.[9]

Queen's is one of the largest employers in Northern Ireland, with a total workforce of 3,903, of whom 2,414 were members of academic, academic-related and research staff and 1,489 were administrative employees.[2] 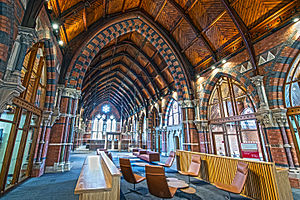 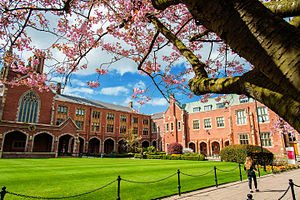 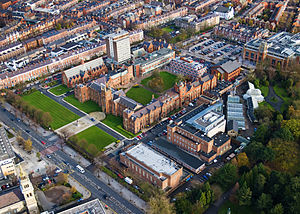 In addition to the main campus not far from the centre of Belfast, the university has two associated university colleges, these being St Mary's and Stranmillis both also located in Belfast. Although offering a range of degree courses, these colleges primarily provide training for those wishing to enter the teaching profession. The university has formal agreements with other colleges in Northern Ireland and operates several outreach schemes to rural areas.

While the university refers to its main site as a campus,[10] the university's buildings are in fact spread over a number of public streets in South Belfast, centring on University Road, University Square and Stranmillis Road, with other departments located further afield. 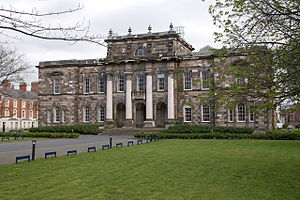 Queen's University Belfast was admitted to the Russell Group of UK research-intensive universities in November 2006.[22][23] Queen’s University has been placed joint 8th in the UK for research intensity following the Research Excellence Framework 2014 (REF). The UK-wide research assessment of higher education institutions has placed Queen’s in the top 20 for research quality and impact. It also confirmed that over 75 per cent of our research is world-class or internationally leading with over 95 per cent of Queen’s academic staff returned for assessment, the University has 14 subject areas ranked within the UK’s top 20 with six of these in the top 10, and two in the top five.[24]

In the National Student Survey 2013, Queen's was ranked 12th in the UK for student satisfaction.[26]

Queen's is ranked in the top 200 universities in the world according to the 2015-16 QS World University Rankings. They also commended Queen's for its leadership role in society and its life-changing research. The University is a global player in areas from cancer studies to sustainability, wireless technology to creative writing and from pharmaceuticals to sonic arts.[27] In the same year the university ranked 36th in the UK (The Complete University Guide 2016).[28]

The university has also been awarded by the Queen's Anniversary Prizes for Further & Higher education on several occasions, including for their work in comprehensive cancer services improving survival rates for patients in Northern Ireland. Most recently, in 2015, Queen's was awarded for its work in the field of engineering and technology[29] 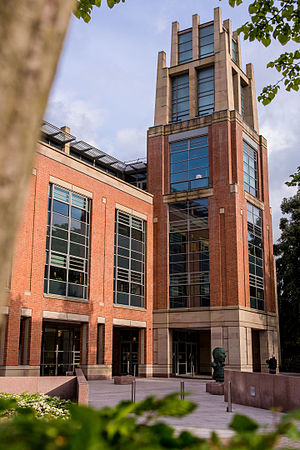 The McClay Library at Queen's University

Entrants to Queen's have, on average, 359 A/AS-level points and there are currently 5.3 applications per place.[30] The Sunday Times has described the Queen's admissions policy as "among the most socially inclusive in Britain and Northern Ireland".[30] 99.5 per cent of first degree entrants are from state schools,[31] although this is mainly due to the lack of private schools in Northern Ireland.

Queen's was established as a non-sectarian institution, with the aim of attracting both Protestant and Catholic students. While the university does not publish data on the religion affiliation of its students, Rupert Taylor, who conducted his PhD research on the university during The Troubles, argued in an article published in 1988 that "Whilst in the past, especially before the Second World War, Catholics were under-represented this is not currently the case". Taylor cites data showing that Catholic representation amongst undergraduates rose from 21.9 per cent in 1958/59 to 27.4 per cent in 1968/69 and 42.5 per cent in 1978/79.[32] By the late 1990s, 54 per cent of Queen's students were Catholics, compared to a 48 per cent share of the Northern Ireland population aged 18–25.[33] The growing share of Catholics in the student population is in part due to the tendency of middle-class Protestants to go to university in Great Britain rather than Northern Ireland.[32]

In 2009, Queen's signed a joint venture partnership with INTO University Partnerships, creating INTO Queen's University Belfast. The INTO centre is based on campus and provides a foundation year for international students who want to study at the University.[34] 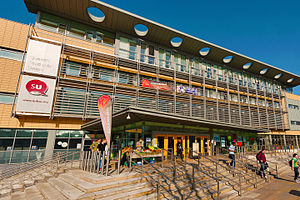 The Students' Union at Queen's (QUBSU) is located opposite the Lanyon Building on University Road, and is provided for under the University's Statutes. All students at the University are automatic members of the Union, making it one of the largest Unions on a single campus in Ireland and the UK. It is administered by the Students' Representative Council (SRC) (elected every October, on a Faculty basis) and an Executive (elected in March), who manage the operations of the Union in conjunction with several full-time staff.

A range of services are provided by the Students' Union following its reopening in March 2007 after a £9 million redevelopment, including an Advice Centre with full-time staff to help with issues such as money problems, accommodation and welfare. Commercial services are also provided for by the Union and include a shop, canteen and coffee franchise. There are also four bars within the building, the biggest of which, the Mandela Hall, hosts numerous concerts each year as well as the majority the Students' Union's club nights. 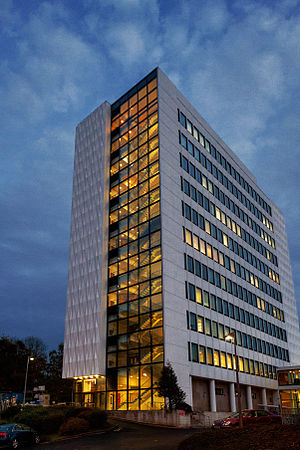 More than fifty sporting clubs and over 100 non-sporting societies are recognised by the Student's Union Council and therefore eligible to apply for an annual grant from the University.[35] The oldest society in Queen's University is the Literary and Scientific Society which focuses on debating political, cultural and social issues within Northern Ireland. Established in 1850 by Edwin Lawrence Godkin, the society has been very successful and produced some of the finest orators within Northern Ireland. The Dragonslayers Gaming Society hosts one of Ireland's largest games conventions, Q-Con, in June of each year, and cultural groups such as An Cumann Gaelach and the Ulster-Scots Society are also present.

The Queen's University Mountaineering Club is notable for producing three Everest summiteers including Ireland's first, Dawson Stelfox.[36] Roger McMorrow and Nigel Hart also summited in May 2007, and were subsequently jointly announced Queen's University Graduates of the year for 2006/07[37] for their role in rescuing a young Nepalese climber left for dead near the summit.[38]

QUB is one of only 20 Universities in the United Kingdom to have the privilege of an AIESEC Local Chapter, developing leadership, business and soft skills in highly motivated students, as well as providing international opportunities through their work abroad program. 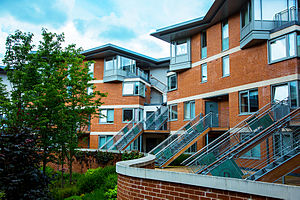 The university provides accommodation on a purpose-built 'student village' called Elms Village, which has its own bar and shop, located on the Malone Road, south of the main campus, as well as in a number of houses in the South Belfast area, including at College Gardens and on Mount Charles.[40]

The university had hosted the annual Belfast Festival at Queen's since 1961 but it was announced in March 2015 that Queen's would not continue with the festival.[41] In 2007 the university held the Irish Student Drama Association Festival. It runs the Queen's Film Theatre, which has been described as Northern Ireland's leading independent cinema,[42] the Brian Friel Theatre and an art gallery, the Naughton Gallery at Queen's, which is a registered museum.[43] In 2008 the Naughton Gallery was awarded the Times Higher Award for Excellence and Innovation in the Arts.[44] Housed in the Lanyon building since 2001 is a marble statue by Pio Fedi of the great physicist Galileo, portrayed deep in thought.[45] 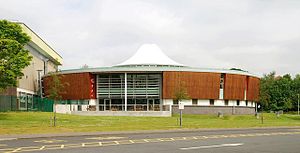 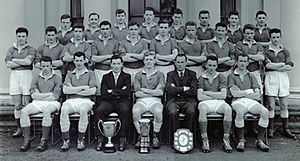 Queen's Physical Education Centre (abbreviated to and known widely as the PEC) recently went through an extension program was awarded 'Best Building 2007' by the Royal Institute of Chartered Surveyors (RICS) Northern Ireland.[46] It is one of the largest sports centres in the British Isles. This building houses many squash courts, several climbing walls and is home to QUB's senior men's and women's basketball teams.

The University Playing Fields, also known as Malone Playing Fields, is located just over 2 miles (3.2 km) from the main campus, comprising 17 pitches for rugby, association football, Gaelic football, hockey, hurling, camogie and cricket. In addition, there are three netball courts, nine tennis courts and an athletics arena where the Mary Peters Track is situated. The area and its surrounding forest of Barnetts Demesne are mapped for orienteering.

The graphic identity, which includes the logotype, was originally created in 2000 by Lloyd Northover, the British design consultancy founded by John Lloyd (graphic designer) and Jim Northover. This identity was updated in 2011 by Belfast based brand consultancy, Mammoth.[citation needed] 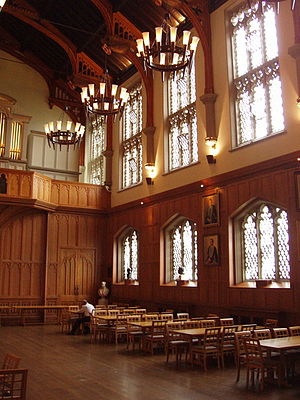 Four alumni had very long and distinguished careers in the Far East. Sir Robert Hart was the Inspector-General of China's Imperial Maritime Customs for almost 50 years. Sir Hiram Shaw Wilkinson served in British Consular Service in China and Japan for 40 years retiring as Chief Justice of the British Supreme Court for China and Corea. Sir James Russell was Chief Justice of Hong Kong. John Carey Hall served in the British Japan Consular Service for more than 40 years retiring as consul-general in Yokohama.

Links with other universities

In 2014 Queen’s announced the opening of China Medical University - Queen's University Belfast Joint College (CQC), a partnership between Queen’s School of Pharmacy and China Medical University (CMU) in Shenyang, Liaoning Province. CMU, had a long standing relationship with the Queen's University's School of Pharmacy at Queen's prior to the joint college. Queen's also has links with Shenzhen University, which began in 1998 and continues to prepare approximately 40 students per year for a degree at Queen's.

Queen's participates in the European Union's ERASMUS programme, allowing undergraduate students to study for a period at universities in Austria, Finland, Iceland, Portugal, Belgium, France, Italy, Slovakia, Bulgaria, Germany, the Netherlands, Spain, the Czech Republic, Greece, Norway, Sweden, Denmark, Hungary, Poland and Switzerland.[50] Queen's is also part of the Utrecht Network which works towards the internationalisation of higher education. The university also has exchange programmes with Fordham University School of Law in New York, USA, the University of Newcastle and the University of Tasmania in Australia, and two universities in Canada: Queen's University in Kingston, Ontario, and the University of Alberta in Edmonton, Alberta.[51] Ching Yun University in Zhongli District, Taoyuan City, Taiwan, lists Queen's as a 'sister institution'.[52] The university is also a member of the Top Industrial Managers for Europe (T.I.M.E.) Association.