Queen Noor of Jordan (Arabic: الملكة نور‎‎; born Lisa Najeeb Halaby on 23 August 1951) is an American woman who is the widow of King Hussein of Jordan. She was his fourth spouse and queen consort between their marriage in 1978 and his death in 1999. She is also known as Noor Al-Hussein.

As of 2011, she is president of the United World Colleges movement and an advocate of the anti-nuclear weapons proliferation campaign Global Zero. In 2015, Queen Noor received the Woodrow Wilson Award for her public service.[1]

Queen Noor was born Lisa Najeeb Halaby in Washington, D.C. She is the daughter of Najeeb Halaby and Doris Carlquist (Swedish descent). Her father was an aviator, airline executive, and government official. He served as Deputy Assistant Secretary of Defense in the Truman administration, before being appointed by John F. Kennedy to head the Federal Aviation Administration. Najeeb Halaby also had a private-sector career, serving as CEO of Pan American World Airways from 1969 to 1972. The Halabys had two children following Lisa; a son, Christian, and a younger daughter, Alexa. They divorced in 1977. Doris C. Halaby died in 2015 age 97.[2]

Noor's paternal grandfather, Najeeb Elias Halaby, a Syrian immigrant, was a petroleum broker, according to 1920 Census records.[3] Merchant Stanley Marcus, however, recalled that in the mid-1920s, Halaby opened Halaby Galleries, a rug boutique and interior-decorating shop, at Neiman Marcus in Dallas, Texas, and ran it with his Texas-born wife, Laura Wilkins (1889–1987, later Mrs. Urban B. Koen). Najeeb Halaby died shortly afterward, and his estate was unable to continue the new enterprise.[4]

According to research done in 2010 for the PBS series Faces of America by Professor Henry Louis Gates, Jr., of Harvard University, her great-grandfather, Elias Halaby, came to New York around 1891, one of the earliest Syrian immigrants to the United States. He had been a Christian and provincial treasurer (magistrate) in the Ottoman Empire. He left Syria with his two eldest sons. His wife Almas and remaining children joined him in the United States in 1894. He died three years later, leaving his teenage sons, Habib, and Najeeb (her paternal grandfather), to run his import business. Najeeb moved to Dallas around 1910 and fully assimilated into American society.[5]

Lisa Halaby attended National Cathedral School from fourth to eighth grade. She briefly attended The Chapin School in New York City, then went on to graduate from Concord Academy in Massachusetts. She entered Princeton University with its first coeducational freshman class, and received a BA in architecture and urban planning in 1973.[6] At Princeton she was also a member of the school's first women's ice hockey team.[7]

After she graduated, Lisa Halaby moved to Australia, where she worked for a firm that specialized in planning new towns. She became increasingly interested in the Middle East and immediately accepted a job offer from a British architectural firm that had been employed to redesign Tehran, Iran. In 1976 she moved back to the United States. She thought about earning a master's degree in journalism and starting a career in television production. However, she accepted a job offer from Managing Director of Arab Air Services, which was founded by her father, who was commissioned by the Jordanian government to redesign their airlines. She became Director of Facilities Planning and Design of the airline he founded.[8]

In 1977, she was working for Royal Jordanian Airlines, in which capacity she attended various high-profile social events as the Director of Facilities Planning and Design. This is where she met Hussein of Jordan for the first time on the development of the Queen Alia International Airport. The airport was named after Queen Alia, Hussein's third wife, who died in a helicopter crash the same year. Halaby and the king became friends while he was still mourning the death of his wife. Their friendship evolved and the couple became engaged in 1978.[8] 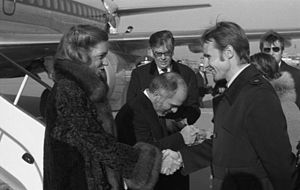 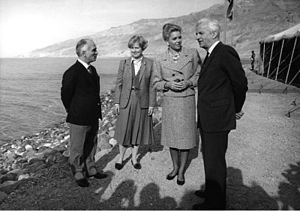 Halaby and King Hussein wed on 15 June 1978 in Amman, becoming his fourth wife and Queen of Jordan.

Upon her marriage she accepted her husband's Sunni Islamic religion and the royal name Noor Al-Hussein ("Light of Hussein"). The wedding was a traditional Muslim ceremony. Although initially regarded as a stranger to the country and its people, she soon gained power and influence by using her role as King Hussein's consort and her education in urban planning for charitable work and improvement to the country's economy.[9]

Behind the scenes, Noor's involvement in politics was sometimes criticized by fundamentalists. In 1984, she supported her husband when he criticized the Americans for their one-sided commitment to Israel, while Americans criticized her for siding with the Jordanians.[8]

Queen Noor founded the King Hussein Foundation (KHF) in 1979. It includes the Noor Al Hussein Foundation and 8 specialized development institutions: the Jubilee Institute, the Information and Research Center, the National Music Conservatory, the National Center for Culture and Arts and the Institute for Family Health, the Community Development Program, Tamweelcom the Jordan Micro Credit Company and the Islamic micro finance company, Ethmar. She is the Honorary Chairperson of JOrchestra. In addition, Queen Noor launched a youth initiative, the International Arab Youth Congress, in 1980.[10]

Queen Noor is a board member of Refugees International and has been advocating for the protection of civilians in conflict and displaced persons around the world. She is outspoken for Iraqis displaced in Iraq, Jordan, Syria and other countries after the 2003 Iraq conflict, and for the millions of Syrians displaced since the onset of the 2011 Syrian civil war.

She is also a Commissioner of the International Commission on Missing Persons and an advisor to Trust Women -the Thomson Reuters Foundation annual conference aiming to put the rule of law behind women's rights.

Queen Noor has been an advisor to, and global advocate for, the International Campaign to Ban Landmines since 1998. She is also a founding leader of Global Zero, an international movement working for the worldwide elimination of nuclear weapons.

Following a long battle with lymphatic cancer, King Hussein died on 7 February 1999. After his death, his first-born son, Abdullah, became king and Hamzah became Crown Prince. Unexpectedly, during 2004, Prince Hamzah was stripped of his status as heir presumptive.[11] On 2 July 2009, King Abdullah II named his eldest son as heir to the throne, thereby ending the previous five years' speculation over his successor.[citation needed]

Though Noor is the queen dowager, she is stepmother to King Abdullah II and thus cannot be classified as "queen mother"; accordingly, she is known as "HM Queen Noor of Jordan", while King Abdullah's wife Queen Rania is styled "HM The Queen of Jordan" per her status of consort. The present King's mother is Princess Muna al-Hussein, a British woman formerly known as Antoinette Avril Gardiner.[citation needed]

Queen Noor divides her time among Jordan, Washington, D.C., and the United Kingdom (in London and at her country residence, Buckhurst Park, near Winkfield in Berkshire). She continues to work on behalf of numerous international organizations.[12] She speaks Arabic, English and French. The queen also enjoys skiing, water skiing, tennis, sailing, horseback riding, reading, gardening and photography.[13]

Media related to Queen Noor of Jordan at Wikimedia Commons