From Infogalactic: the planetary knowledge core
Jump to: navigation, search
This article is about the analytic philosophy of Quietism. For other uses of the term "quietism", see Quietism (disambiguation). 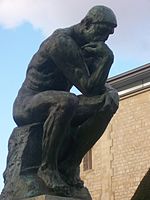 Quietism in philosophy is an approach to the subject that sees the role of philosophy as broadly therapeutic or remedial. Quietist philosophers believe that philosophy has no positive thesis to contribute, but rather that its value is in defusing confusions in the linguistic and conceptual frameworks of other subjects, including non-quietist philosophy. By re-formulating supposed problems in a way that makes the misguided reasoning from which they arise apparent, the quietist hopes to put an end to humanity's confusion, and help return to a state of intellectual quietude.[citation needed]

By its very nature, quietism is not a philosophical school as understood in the traditional sense of a body of doctrines, but still it can be identified both by its methodology, which focuses on language and the use of words, and by its objective, which is to show that most philosophical problems are only pseudo-problems.

The genesis of the quietist approach can be traced back to Ludwig Wittgenstein, whose work greatly influenced the Ordinary Language philosophers. One of the early Ordinary Language works, Gilbert Ryle's The Concept of Mind, attempted to demonstrate that dualism arises from a failure to appreciate that mental vocabulary and physical vocabulary are simply different ways of describing one and the same thing, namely human behavior. J. L. Austin's Sense and Sensibilia took a similar approach to the problems of skepticism and the reliability of sense perception, arguing that they arise only by misconstruing ordinary language, not because there is anything genuinely wrong with empirical evidence. Norman Malcolm, a friend of Wittgenstein's, took a quietist approach to skeptical problems in the philosophy of mind. More recently, the philosophers John McDowell and Richard Rorty have taken explicitly quietist positions.