From Infogalactic: the planetary knowledge core
Jump to: navigation, search
This article is about the son of the Buddha. For the Hindu/Buddhist demon/dharmapāla, see Rahu. For the village in Estonia, see Rahula, Estonia. For Matara Rāhula College in Sri Lanka, see Rahula College.

Rāhula (born c. 534 BC) was the only son of Siddhartha Gautama (Pāli Siddhattha Gotama), later known as the Buddha, and his wife Princess Yasodharā.

Accounts of his life differ in certain points. The following is that given in the Pāli Canon. 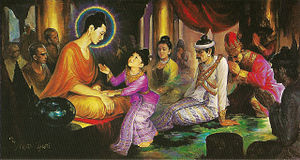 Prince Rāhula asking the Buddha for his inheritance, after Buddha's renunciation.

Prince Siddhartha was preparing himself to leave the palace. One account[1] claims that when he received the news of his son's birth he replied Rāhu jāto, bandhanam jātam — "A rāhu is born, a fetter has arisen." Accordingly, the child was named Rāhula, meaning "fetter", or "impediment", recognizing that the child could be a tie that bound him to his wife Yashodhara, a binding that may impede a search for enlightenment.[2] Others, however, feel rāhu does not mean "fetter" in this sense.[3] The second account, found in the Mūlasarvāstivāda vinaya, is that Rāhula received his name in accordance with an eclipse of the moon, caused by the snake Rahu.[4] In Japanese he is called Ragora (羅睺羅).

Supporting the first account, in the Dhammapada, the pleasure and joy that a man receives in his wife and children is called a "soft fetter" that ties individuals to life and suffering, not just through eventual loss and separation of loved ones but more deeply and subtly may act as ties to cyclic existence (samsara).

Rāhula was raised by his mother and grandfather, King Suddhodana. When he was seven years old, Rahula requested his father, missing him dearly; the Buddha returned to his home city of Kapilavatthu. On the seventh day of his return, Yasodharā took Rāhula to see his father, the Buddha. She told Rāhula that since his father had renounced the palace life and as he was the next royal prince in line, he should ask his father for his inheritance of crown and treasure for his future sake when his grandfather would no longer rule the kingdom.

After the meal, Rāhula followed the Buddha, saying "Give me my inheritance." Nobody tried to stop him, nor did the Buddha prevent him from following him. He then looked at his father and said, "Lord, even your shadow is pleasing to me."

Reaching the Park of Nigrodha, where the Buddha was staying, the Buddha thought to himself: "He desires his father's inheritance, but it is wrought with troubles. I shall give him the benefit of my spiritual Enlightenment and make him an owner of a transcendental inheritance."

The Buddha called Venerable Sariputta and asked him to ordain little Rāhula who became the first Sāmanera (novice monk).

The King, discovering that now his grandson and a number of young men in the royal family had requested ordination, asked the Buddha only to ordain a minor with the consent of his parents or guardian. The Buddha assented. This rule was expanded to include the spouses of those intending to join the Order of monks and nuns.[5]

Shortly after Rāhula's ordination the Buddha taught him the importance of telling the truth. This discourse is known as the Rahulovada Sutta.[6] The Buddha placed truth as the highest of all virtues. The seekers of Truth (those who have as their goal Nibbana) should not break the precept of Truth.

Rāhula subsequently became one among the many arhants through following the Buddha's teachings. 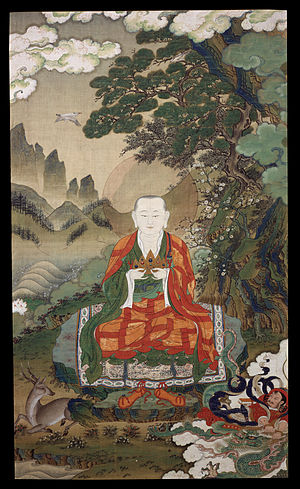 In the Mūlasarvāstivāda-vinaya, used by Tibetan Buddhists, it is claimed that Rāhula was conceived on the evening of the Renunciation, and born six years later, on the day that his father achieved Enlightenment (which is also said to coincide with a lunar eclipse). Also see "Rahu," a Hindu Asura and Dharmapala.

Mahayana Sources: in the Lotus Sutra, Shakyamuni predicts that Rahula will become a buddha named "Treader on Seven-Jeweled Lotuses Tathagata". In the following verse section he says, "In worlds to come, seeing infinite kotis of buddhas, to all he will be eldest son and with all his mind seek the Buddha-way. Of the hidden course of Rahula only I am able to know" (Chapter IX).