RAF Barkston Heath has the Naval and Army Elements of No. 3 Flying Training School (3 FTS) which, for a period between approximately 1995-2010 operated the Slingsby T67M260 Firefly two-seat trainer. The school now operates the Grob Tutor T1.[2] A secondary role of RAF Barkston Heath is as a Relief Landing Ground for the flying training activities at RAF Cranwell.

3 FTS provides elementary flying training for Royal Navy and Army Air Corps students, the distinctive black and yellow Slingsby Firefly was a common sight above the skies of Lincolnshire until replaced by the somewhat quieter Grob Tutor.

At the time of its construction, Barkston Heath in common with a number of other airfields in the Grantham area that had been planned for the RAF's No. 7 Group.

In late 1943, Barkston Heath was made available to the United States Army Air Forces Ninth Air Force. It was earmarked for basing troop carrier units scheduled to be transferred from Sicily to participate in the forthcoming cross-Channel invasion, Operation "Overlord". During its time as a USAAF airfield, Barkston Heath was designated as USAAF station 483.

The first US personnel arrived on 13 February from Sciacca, Sicily, and most of their Douglas C-47 Skytrains on the 17th and 18th, although not all aircraft were in place until a month later. These new occupants were the 61st Troop Carrier Group with its components being:

The 61st TCG was part of the 52nd Troop Carrier Wing, IX Troop Carrier Command. The headquarters of the 61st Troop Carrier Group moved to an Advanced Landing Ground (ALG) at Abbeville (ALG B-92), in France, on 13 March 1945, but its squadrons went to RAF Chipping Ongar from where they participated in Operation "Varsity" on 24 March carrying British paratroops who dropped near Wesel.

An increased demand for theatre air transport brought the 349th TCG from Baer Field Indiana in late March 1945 with its Curtiss C-46 Commando transports. Group headquarters was established at Barkston on 30 March, but the group only remained three weeks, moving to Rove/Amy, France, on 18 April.

In May, a detachment of C-46s from this group returned to airlift British 1st Airborne Division troops to Norway. 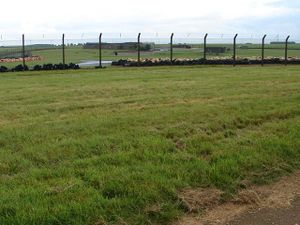 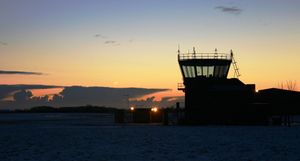 The USAAF returned control of the airfield to the Air Ministry in June 1945 when the war in Europe ended. Barkston Heath was used by No 256 Maintenance Unit and No 2 RAF Regiment. Beginning in May 1948, it was assigned to RAF Cranwell as a relief landing ground, which it remains to this day as a satellite.

From 1983 to 1989 Barkston was home to A flight 25 Squadron with Bloodhound Missiles when they returned from RAF Bruggen in Germany. For a while Barkston was the home of Red Dragon flight delivering Prince Charles's basic flight training.

Today, Barkston Heath remains a largely unspoilt Second World War airfield. It remains an active base, providing a home to both 703 Naval Air Squadron and 674 Squadron Army Air Corps who operate the Grob G 115 Tutor in a training role. The airfield was also used during the 1980s by a number of privately owned aircraft of various types, and for several years it has also been the venue for the British National Model Aircraft Championships. Because the aircraft used are relatively small, the runways have not needed to be lengthened, preserving the wartime layout. Consequently, many of the wartime loop dispersals survive, along with the T-2 hangars.

The current generation of training aircraft are operated by the No 3 Flying Training School but provided by a civilian contractor (Babcock Aerospace) that also provides a significant proportion of the instructional staff, an Air Traffic Control service, plus engineering and support personnel. Other airfield services are provided by SERCO.

On 11 July 2003 the airfield was the venue for a parade to mark the formation of 674 Squadron Army Air Corps and the re-formation of 703 Naval Air Squadron. The Saluting Officer was Major General Richard Gerrard-Wright CB CBE DL.

RAF Barkston Heath's units are based 10 miles away at RAF Cranwell, but Barkston Heath's proximity and relative calm makes it ideal as a base for Elementary Flying Training. The units that most frequently operate there are as follows: