It was the location of RAF Mediterranean Command headquarters of the Royal Air Force during the Second World War. Particularly during the Siege of Malta from 1941 to 1943, RAF Luqa was a very important base for British Commonwealth forces fighting against Italy and Germany for naval control of the Mediterranean and for ground control of North Africa. Air combat over and near Malta was some of the most ferocious of the war, and a series of airfields were built on the small, rocky island: at Luqa, Ta'Qali, and Hal Far, plus satellite fields at Safi, Qrendi and on Malta's second island of Gozo.

After the war, Luqa remained an important RAF base, serving during the Suez Crisis of 1956, but also served as Malta's main civilian airport. The RAF left in 1979 following a British government decision not to renew the lease on the station from the Maltese. The payments demanded were several times the previous payments under the previous lease. It is also possible that the Avro Vulcan XM645 that crashed over the village of Żabbar led to the Maltese decision to effectively get the RAF to leave by raising the proposed lease payments to what was known to be a level unacceptable to the British. the last squadron to leave was 223 nimrod conversion unit which left in 1980 having share the runway with Malta international airport 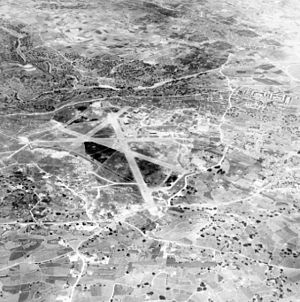 Nowadays, the location has been developed into the main entry point of the modern, independent country of Malta, under the name Malta International Airport. It is sometimes still referred to as "Luqa Airport" or "Valletta Airport".