Previously it was RAF Lyneham which was the home of all the Lockheed C-130 Hercules transport aircraft of the Royal Air Force (RAF) before they were relocated to RAF Brize Norton.

RAF Lyneham was the Royal Air Force's principal Transport hub, operating the modern Lockheed Martin C-130J Hercules, and the aging, but very adaptable, Lockheed C-130K Hercules. The airfield was designated as a Master Diversion Airfield. It was one of the primary airfields to which aircraft divert in the eventuality of their home bases being closed due to weather, or other unforeseen events (such as aircraft crashes), having occurred.

The airfield became renowned for being the "gateway" between the United Kingdom and Afghanistan; the station was also where repatriation of British personnel killed in Iraq and Afghanistan took place. The bodies were transported through the nearby town of Royal Wootton Bassett, with crowds lining the streets to pay tribute to the fallen.

The station closed on 31 December 2012 with the majority of its personnel and other assets having moved to RAF Brize Norton. On 31 May 2011, a parade was held, attended by the Princess Royal, to mark the departure of the squadrons. The final Hercules left Lyneham on 1 July 2011.[1] Daily flying operations ceased on 30 September 2011.[2]

The airfield was built in 1939, necessitating the demolition of Lyneham Court manor house, the buildings of Cranley Farm and the village's tennis courts. The airfield itself was initially a grass landing area although the RAF always planned to lay hard runways. Hangars and other buildings were dispersed around the site to avoid creating one large target for an aerial enemy.[3] 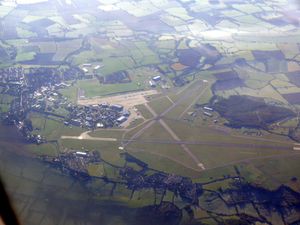 The station was opened on 18 May 1940 as No. 33 Maintenance Unit (33MU), with no ceremony and few personnel. On the first day of operations, the personnel strength was recorded as four officers, one other rank and 15 civilians. Nine vehicles were also recorded, including two tractors, an ambulance and a Crossley fire engine. The station did not have any aircraft however, until the end of the month when a de Havilland Tiger Moth and a Fairey Albacore arrived.

A single enemy aircraft attacked the station on 19 September 1940, dropping an incendiary and two high explosive bombs before strafing part of the airfield. Five civilian workmen were killed.[4]

On 14 October 1942, No. 511 Squadron RAF (511 Sqn) was formed from No. 1425 (Communication) Flight RAF (1425 Flt) at RAF Lyneham. The squadron continued the work of the flight, operating regular transport schedules to Gibraltar using the Consolidated Liberator. To extend the route from Gibraltar to Malta the squadron also operated the Armstrong Whitworth Albemarle. As the war progressed, 511 Sqn expanded its long-range transport role and was the first squadron to operate the Avro York (a transport aircraft based on the Avro Lancaster). At first the Liberators and Yorks were operated as separate flights, but the Liberator flight became No. 246 Squadron RAF (246 Sqn) in 1944. The squadron continued to fly trooping flights, particularly between the United Kingdom and India until it was disbanded on 7 October 1946.

With the increase in air transport operations in the RAF, as opposed to ferrying, Transport Command was formed in March 1943. Lyneham, in No. 46 Group RAF (46 Gp), was its main airfield in the south, and as well as sending its own aircraft overseas, acted as the clearance airfield for planning, diplomatic clearance, customs and briefing purposes for transport aeroplanes from other stations flying abroad. It also provided facilities for aircraft being ferried overseas. 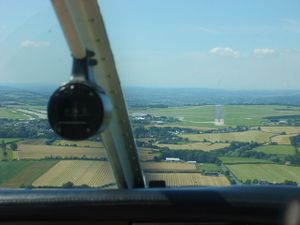 No. 99 Squadron RAF (99 Sqn) reformed on 17 November 1945, at RAF Lyneham equipped with Yorks, later operating as part of the Berlin Airlift. It continued in the transport role with the Handley Page Hastings then the Bristol Britannia from 1959 to 1976. 99 Sqn was disbanded in 1976, following the 1974 Defence White Paper. The squadron was reformed in 2002, to operate the RAF's Boeing C-17 Globemaster IIIs from RAF Brize Norton.

On 16 October 1946, 511 Sqn was formed again as a York operator, continuing to fly the long-distance routes to India and the Far-East until, like a lot of transport squadrons, it became involved in the Berlin Airlift. The squadron then re-equipped with the Hastings and in 1957 the squadron moved to join other operators of the Hastings at RAF Colerne. A year later the squadron disbanded when it was re-numbered to No. 36 Squadron RAF (36 Sqn) on 1 September 1958. 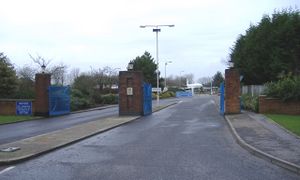 From 1958 Lyneham became one of the 18 Stations designated as dispersal airfields for the RAF's nuclear deterrent V bomber Force. A dispersal area called a "Dispersed Airfield" was built so that four Avro Vulcan or Handley Page Victor aircraft could operate from a self-contained base within Lyneham.[5]

511 Sqn was re-formed again at Lyneham on 15 December 1959, as the second squadron to operate the Britannia on long-range trooping flights. It moved out of RAF Lyneham for RAF Brize Norton in June 1970, as Lyneham became the airfield for the newer Lockheed C-130K Hercules. The squadron was disbanded on 6 January 1976, when it was decided to withdraw the Britannia from service. 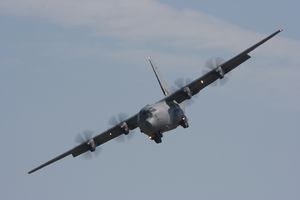 Lyneham's position as the primary tactical transport base for the RAF was emphasised in February 1971 when No. 30 Squadron RAF (30 Sqn) and No. 47 Squadron RAF (47 Sqn) were transferred from RAF Fairford, followed in September by No. 48 Squadron RAF (48 Sqn) from RAF Seletar in Singapore. This gave a total of five tactical Hercules squadrons at Lyneham, as well as the VIP transport Comet squadron, and in 1976, the station became the largest operational airfield in the RAF with the arrival from Cyprus of Hercules-equipped No. 120 Squadron RAF (LXX Sqn), bringing to seven the station's total of resident aircraft squadrons.[6]

In 1992, No. 242 Operational Conversion Unit (242 OCU) was renamed No. 57 (Reserve) Squadron RAF (57 Sqn), and moved from the old airmen's hutted accommodation into a new building. There has been a continuous programme of building since the mid-eighties to update and replace the original Station buildings, which were not designed or built with such a long life in view in 1939 and the forties.[7]

The decision to close RAF Lyneham was made in 2002, and it was scheduled for closure by 2012 with all functions and aircraft relocated to RAF Brize Norton.[10] It was planned that the base would remain open until the last of the C-130K fleet is retired and the 24 new generation C-130Js would move to Brize Norton to join the transport and aerial refuelling fleets there. 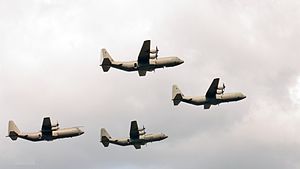 No. 38 Expeditionary Air Wing was formed at Lyneham on 1 April 2006 encompassing most of the non-formed unit personnel on station. The EAW does not include the flying units at the station or the other formed units i.e. Tactical Medical Wing. The Station Commander was dual-hatted as the Officer Commanding of the wing.

A parade attended by the Princess Royal was held on 31 May 2011, to mark the departure of 24, 30 and 47 Sqns from Lyneham. The Douglas Dakota of the Battle of Britain Memorial Flight conducted a flypast.[11] The last four Hercules aircraft of those squadrons flew out of the station the following day, one of which was piloted by the Station Commander, Group Captain John Gladstone. The aircraft flew over several towns in the area before heading to Brize Norton.[12]

A ceremony, attended by Prime Minister David Cameron, was held at Brize Norton on 31 August 2011 to mark the formal transfer the role of repatriations from Lyneham.[13]

It was announced in July 2011 by the then-Secretary of State for Defence, Dr Liam Fox, that Lyneham would become the new site of the Defence Technical Training Change Programme centre.[14] This will coincide with the closure of the Royal Electrical and Mechanical Engineers (REME) technical training establishments at Arborfield Garrison and Bordon Garrison, both of which are due to move to Lyneham by the end of 2015.[15]

With the transfer of military units and personnel to Brize Norton complete, around 1,000 members of military and civilian staff remained on site, gradually reducing in numbers until RAF Lyneham closed entirely,[12] on 31 December 2012.[16] All military flying operations from RAF Lyneham ceased on 30 September 2011, at which point the station's air traffic control unit closed.[17] Following the cessation of flights, the RAF Lyneham Flying Club moved to Cotswold Airport.[18]

A stone memorial commemorating the RAF's use of the station for over 70 years was unveiled on 1 June 2012.[19] All remaining RAF Lyneham personnel left the station by December 2012.[20]

The Ministry of Defence announced plans in December 2012 to re-develop Lyneham as a Defence Technical Training establishment by the end of 2015 and, on 14 December 2012, it invited interest from industry into developing the infrastructure at the former RAF site at Lyneham.[21] The MOD's commercial process will select a construction contractor for the work. Demolition of some unsafe and redundant buildings at Lyneham will commence in early 2013, with construction due to start in early 2014 and to be completed by December 2015. Redevelopment plans include workshops, classrooms and laboratories, as well as sports and welfare facilities and some refurbished military accommodation. There will also be an outdoor training area to simulate scenarios such as recovering overturned vehicles. Once completed, there would be approximately 2,000 military and civilian personnel posted at Lyneham.

Air Commodore Richard Gammage, head of the Defence Technical Training Change Programme leading this major MOD project said: "Since July 2011, the MOD has made significant progress in its planning to relocate the Army’s technical training to Lyneham, the first in a series of programmed moves. This Programme will modernise training for the Armed Forces making it more flexible and better able to respond to changes in equipment and learning technologies. This will ultimately support our troops on operations".[22]

In September 2015, Michael Fallon, Secretary of State for Defence, announced cancellation of the intention to consolidate Navy and RAF technical training at Lyneham. The first phase, the relocation of two Army schools, will be completed as planned.[23][24]

The REME Museum, currently based in Arborfield, will be moved into the old RAF Officers Mess.[25] The move provides an opportunity to refresh the displays and layout as well as having new facilities such as the café and archives with a new reading/conference room. There will also be dedicated education facilities to cater for groups of all ages and interests.[26] 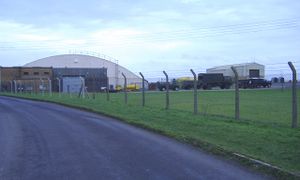