The Royal Air Force Memorial is a 1923 military memorial on the Victoria Embankment in central London, dedicated to the memory of the casualties of the Royal Air Force in World War I (and, by extension, all subsequent conflicts). It became a Grade II listed building in 1958. It is considered to be the official memorial of the RAF and related services. It is sited at Whitehall Steps, near Cleopatra's Needle, between the north-bank ends of Charing Cross Bridge and Westminster Bridge, and directly to the east of the main Ministry of Defence building on Whitehall. The Battle of Britain Monument, London is nearby.

A committee to erect an RAF memorial was first established in February 1919, and relaunched in January 1920, led by Lord Hugh Cecil and Air Chief Marshal Sir Hugh Trenchard. Funds to erect a memorial were raised by the RAF Benevolent Fund. The memorial was designed by Sir Reginald Blomfield.

The memorial was unveiled on 16 July 1923 by the Prince of Wales (later Edward VIII). The Chief of the Air Staff traditionally places a wreath at the memorial on Battle of Britain Day, 15 September, each year.

The memorial comprises a tapering Portland stone pylon topped by zodiacal globe bearing a gilded eagle, taken from the RAF's badge, with raised wings, facing east towards the River Thames and nominally towards France. The eagle was sculpted by William Reid Dick and cast by Parlanti. Blomfield used similar pylons for the war memorials in Torquay and Luton, topped by different devices.

The pylon bears inscriptions on the sides facing the Embankment to the west and to the river to the east. Further inscriptions were added after the Second World War, unveiled by Trenchard on 15 September 1946. 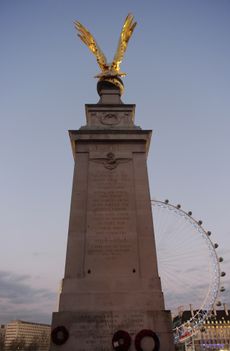 Around the top of the pylon, each face bears alternately the words PER ARDUA and AD ASTRA, from the motto of the RAF, "Per ardua ad astra". On the west side of the pylon facing the Embankment, the words "Per Ardua" are picked out in gold, and lower down there is the RAF insignia, and a dedication: IN MEMORY OF/ ALL RANKS OF THE/ ROYAL NAVAL AIR/ SERVICE ROYAL/ FLYING CORPS/ ROYAL AIR FORCE/ AND THOSE/ AIR FORCES FROM/ EVERY PART OF THE/ BRITISH EMPIRE/ WHO GAVE THEIR/ LIVES IN WINNING/ VICTORY FOR/ THEIR KING/ AND COUNTRY/ 1914–1918", and a quotation from Exodus, chapter 19: I BARE YOU ON EAGLES/ WINGS AND BROUGHT/ YOU UNTO/ MYSELF. Further down, on the base, is another inscription THIS INSCRIPTION IS ADDED/ IN REMEMBRANCE OF THOSE/ MEN AND WOMEN OF THE/ AIR FORCES OF EVERY PART OF/ THE BRITISH COMMONWEALTH AND EMPIRE/ WHO GAVE THEIR LIVES/ 1939–1945. The side facing the river bears the RAF insignia again and the inscription: 1914/ 1918/ IN/ PERPETUAL/ MEMORY/ 1939–1945.