The RAF Regiment is trained in CBRN (Chemical, Biological, Radiological and Nuclear) defence and equipped with advanced vehicles and detection measures. RAF Regiment instructors are responsible for training all Royal Air Force personnel in basic Force Protection, such as first aid, weapon handling, and CBRN skills.

The regiment and its members are known within the RAF as 'The Regiment', 'Rock Apes' or 'Rocks'. After a 32-week trainee gunner course, its members are trained and equipped to prevent a successful enemy attack in the first instance; minimise the damage caused by a successful attack; and ensure that air operations can continue without delay in the aftermath of an attack. RAF Regiment squadrons use aggressive defence tactics whereby they actively seek out infiltrators in a large area surrounding airfields.

The genesis of the RAF Regiment was with the creation of No. 1 Armoured Car Company RAF in 1921 for operations in Iraq, followed shortly afterwards by No. 2 Armoured Car Company RAF and No. 3 Armoured Car Company RAF. These were equipped with Rolls-Royce Armoured Cars and were highly successful in ground combat operations throughout the Middle East in the 1920s and 1930s. The RAF Regiment came into existence, in name, on 5 February 1942. From the start it had both field squadrons and light anti-aircraft squadrons, the latter originally armed with Hispano 20mm cannon and then the Bofors 40 mm anti-aircraft gun. Its role was to seize, secure and defend airfields to enable air operations to take place. Several parachute squadrons were formed to assist in the seizing of airfields and No. II Squadron retains this capability. 284 Field Squadron was the first RAF unit to arrive in West Berlin in 1945, to secure RAF Gatow. 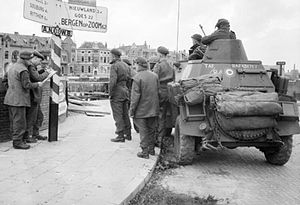 During the Second World War, with its first headquarters established at RAF Alma Park, Grantham, Lincolnshire and its first depot at nearby RAF Belton Park the RAF Regiment grew to a force of over 80,000 men in 280 squadrons of 185 men each (each squadron including five officers). Squadrons usually consisted of a Headquarters Flight, three Rifle Flights, an Air-Defence Flight, and an Armoured-Car Flight. The flights were grouped together into wings as needed. It also operated six Armoured Car Squadrons to provide an area response capability to several RAF stations.

In late June 1944, with the British Army fighting in Normandy where they were sustaining heavy losses and at the same time suffering from a severe shortage of manpower and therefore desperate for more men, it was decided to transfer 25,000 officers and men of the RAF Regiment to the Army, mostly to the infantry and the Foot Guards, to be retrained.[1] They proved to be of exceptionally high quality.

The Second World War campaign in eastern India and northern Burma was fought in jungle and mountains with few or non-existent roads and which facilitated the infiltration of enemy patrols behind front lines. This was overcome by holding defensive "boxes" mainly or entirely supplied by air. The defence of forward airfields close to the main army concentrations was vital to this strategy. A training school and depot for the Regiment was established at Secunderabad in October 1942 to retrain former ground defence airmen. It had an assault course considered tougher than anything the army had in India. Six field squadrons and seventy AA flights were initially formed containing 160 officers and 4,000 other ranks.[2] Until mid-1944 the AA flights were equipped only with light machine guns, then with Hispano 20 mm cannon for the rest of the war. Regiment units defended airfields and forward mobile radar units in Arakan in the allied offensive in late 1942 and early 1943.[3] During the Battle of Imphal all supplies and reinforcements had to be flown in between 29 March and 22 June 1944 with Regiment units providing vital airfield defence.[4] Following the failure of the Japanese Operation U-Go it was decided to pursue the shattered remnants of the Japanese 15th Army into Burma during the monsoon, in average rainfall of ten inches per day, and rifle flights were sometimes attached to advancing Indian Army and British East African units to gain experience in the jungle.[5] Units of 1307 Wing were flown into the newly captured and strategically vital Meiktila airfield on 1 March 1945. Only a roughly nine hundred metre square box, shared with the army and some United States anti-aircraft artillery, could be held at night and the airfield had to be cleared of enemy each morning before flying could start. As one of the Regiment's proudest battle honours this three week battle destroyed the Japanese hold on northern Burma.[6] 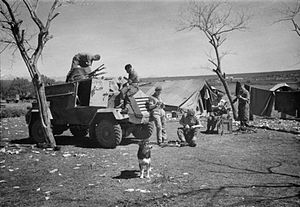 King George VI became Air Commodore-in-Chief of the Regiment in 1947. He later decided to present his King's Colour in 1952, on the 10th anniversary of the Regiment's founding. The King, however, died around this time and Queen Elizabeth instead presented the Queen's Colour a year later.[7] 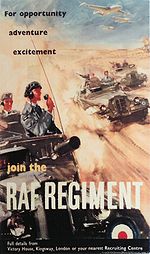 A recruiting poster from the 1950s.

Also from the 1980s there were 3 Squadrons (19,20 and 66) who were also equipped with Rapier and defended the USAF Airbases of RAF Upper Heyford, RAF Fairford, RAF Mildenhall, RAF Bentwaters, and RAF Woodbridge. These units were disbanded at the end of the Cold War.

Formerly the RAF's firefighters were also members of the RAF Regiment, although they are now independent of it.

In July 2004 it was announced that the role of providing Ground Based Air Defence was to be transferred to the British Army's Royal Artillery and the four Royal Air Force Regiment air defence squadrons (15 Sqn; 16 Sqn; 26 Sqn and 37 Sqn) were to be disbanded. The Regiment has a museum at RAF Honington near Bury St Edmunds. The RAF Regiment mounts annually the King's Guard/Queen's Guard at Buckingham Palace, St James's Palace, Windsor Castle and the Tower of London, with the first occasion being on 1 April 1943.

Origin of the "Rock Ape" nickname

In the past the nickname "Rock Ape" has been attributed to their traditional role guarding areas of Gibraltar,[citation needed] but this is not so. The term came into use after an accident in the Western Aden Protectorate in November 1952. Two Regiment officers serving with the APL at Dhala decided to amuse themselves by going out to shoot some of the hamadryas baboons (locally referred to as "rock apes"). The officers drew rifles and split up to hunt the apes. In the semi-darkness one of the officers fired at a moving object in the distance. When he reached the target he discovered he had shot the other officer. After emergency treatment Flight Lieutenant Percy Henry Mason survived to return to service a few months later. When asked why he had fired at his friend by a board of inquiry the officer replied that his target had "looked just like a rock ape" in the half light. The remark soon reverberated around the RAF and it was not long before the term was in general use.[citation needed]

Another version of the nickname rationale was that Reich Minister of Propaganda Goebbels heard the legend that, if the barbary apes on the Rock of Gibraltar ever left, the British Empire would crumble. At that stage of the war, when things weren't going too well for the Axis forces, he decided that a propaganda coup was required and reportedly sent a commando raid to eradicate the apes. The story goes that Winston Churchill heard of the mission and immediately tasked the RAF Regiment with protecting the apes, and thus the nickname was born.[8] 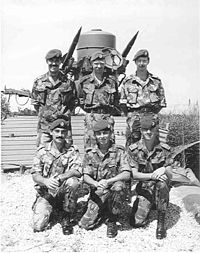 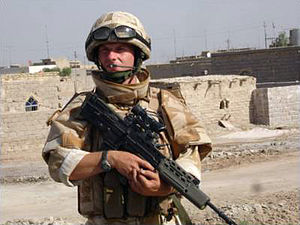 An RAF Regiment gunner in Iraq

The RAF Regiment comes under command of 2 Group, Air Command. Its members are organised into ten regular squadrons, - Nos 1, 2, 3, 15, 26, 27, 34, 51, 58 and 63/Queen's colour Squadron - of which eight are field squadrons and two are specialist CBRN (Chemical, Biological, Radiological and Nuclear units under the umbrella of the defence CBRN Wing (No 20 Wing RAF Regiment -see note below), plus four Royal Auxiliary Air Force (RAuxAF) Regiment (RAuxAF Regt) squadrons. These are intended to counter ground-based threats to overseas/deployed RAF assets and, to this end, are trained as mobile infantry to move on foot, or in helicopters and protected mobility vehicles, to defend airfields and landing sites. The large area surrounding airfields (regularly up to 140 km square) means RAF Regiment rifle flights (platoons) often spend long periods of time deployed on the ground deterring and detecting potential attackers. Since 2007, some 10 RAF Regiment gunners have been killed in action, and many seriously injured, in conflict in Iraq and Afghanistan. Additionally, over the same period, three Military Crosses have been won by RAF Regiment members for conspicuous bravery.

Members of the RAF Regiment are equipped with a range of direct and indirect fire systems and surveillance and night vision equipment. The way a field squadron operates depends upon the threat they are facing, mounting defensive positions or aggressive patrolling outside the airfield boundary. As air bases are fixed and supporting elements are unable to redeploy quickly, field squadrons must engage an attacking adversary at the earliest opportunity to prevent air operations from being disrupted. 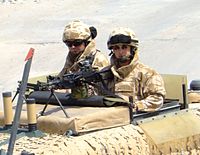 Two members of the RAF Regiment returning to Basra air station, Iraq, in May 2006.

Field Squadrons are divided into flights, which are equivalent in size to an army platoon. Each squadron contains several rifle flights, whose task is to engage the enemy at close range, and a support weapons flight, which provides fire support to the rifle flights using machine guns, mortars and snipers.

The field squadrons are 171 strong making them larger than an infantry company in the British Army.Not all personnel on an RAF Regiment squadron are trained gunners but can be involved in specialist support services such as administrators and drivers. A typical RAF Regiment squadron has support elements from the RAF but these personnel do not always deploy on patrols and other combat operations. All RAF Regiment personnel are male as it is British Government policy that women cannot serve in close combat units.[9] There are approximately 2,000 regular airmen (i.e. Other Ranks), 300 regular officers, and 500 reservists.

Since 1990, the RAF Regiment has conducted operations in Afghanistan, Bosnia, Croatia, Cyprus, Falkland Islands, Iraq, Kosovo, Kuwait, Northern Ireland, Saudi Arabia, Mali and Sierra Leone. Some RAF Regiment officers and Senior Non Commissioned Officers have been seconded to the Army in roles such as Forward Air Controllers with some Tactical Air Control Parties (TACPs) that co-ordinate Close Air Support for the ground forces. The Regiment provide staff for the Defence CBRN Centre at Winterborne Gunner which trains personnel from all three Services and the civilian police in CBRN defence skills; a flight of some 40 RAF Regiment personnel forms part of the tri-service Special Forces Support Group. Perhaps the most important RAF Regiment role is in providing Ground Defence Training to the rest of the Royal Air Force. All RAF personnel receive Initial Ground Defence Training as part of their Basic Training from RAF Regiment Instructors. Each year all RAF personnel are required to undertake annual training in Skill At Arms, CBRN, First Aid, and Post Attack Recovery. This is known as Common Core Skills. This training is run by RAF Regiment Flight on RAF Stations. Additional training is given prior to deployment.

In 2011, as part of the Strategic Defence and Security Review, it was announced that from December 2011, the CBRN role undertaken by the Joint CBRN Regiment, a combined Army/RAF unit, would be transferred to the RAF Regiment (as lead service) under the new Defence CBRN Wing, formed from 26 Squadron, 27 Squadron and 2623 (Auxiliary) Squadron. The army retains involvement through the continued use of the Royal Yeomanry to provide trained battlefield casualty replacements.[10]

The RAF Regiment's basic training increased to 32 weeks to incorporate the specialist training centred on air-aware soldiering. Since the 2010 Strategic Defence and Security Review, the RAF Regiment have recently begun a large reservist recruitment drive for their reserve field squadrons calling for civilians with and without military experience.[citation needed]

In November 2013, The Queens Colour and No’s 1 and 27 Squadron have already had their new colours presented, however No’s 16, 37 and 48 squadrons have been disbanded[11] 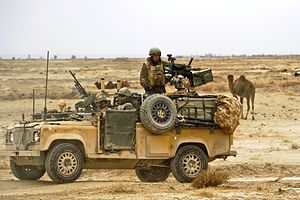 Personnel of the Royal Air Force Regiment in a Land Rover with a Weapons Mount Installation Kit ("Wimik"), stopped on a road while conducting a combat mission near Kandahar Airfield, Afghanistan, in 2010.