The station badge depicts Lincoln Cathedral rising through the clouds.[1]

Waddington opened as a Royal Flying Corps flying training station in 1916 and was transferred to the Royal Air Force on 1 April 1918 operating until 1920, when the station went into care and maintenance.[2]

Waddington reopened as a bomber base on 3 March 1937,[citation needed] with 50 Sqn arriving on the same day with their Hawker Hinds and then adding the Handley Page Hampden.[10] 110 Sqn arrived 15 days later initially with the Hind before switching to the Bristol Blenheim I.[11] On 7 June 1937 88 Sqn reformed at Waddington with the Hind before moving to RAF Boscombe Down on 17 July 1937.[12] On 16 June 1937 44 Sqn moved in from RAF Andover flying the Blenheim I before switching to the Avro Anson I and the Hampden in February 1939.[13] In May 1939 110 Sqn left going to RAF Wattisham[11] and 50 Sqn left the following year being moved to RAF Lindholme.[10]

In November 1940 it was the first station to receive the Avro Manchester heavy bomber.[citation needed]

No. 44 Squadron RAF was the first in RAF Bomber Command to fly operationally with the Avro Lancaster on 2 March 1942 from Waddington.[citation needed]

On 17 April 1942 at around 3pm, six Avro Lancasters from 44 Sqn left in daylight for the MAN diesel engine (for U-boats) factory at Augsburg in southern Germany (Bavaria). Four Lancasters were shot down and Squadron Leader John Dering Nettleton received a VC, piloting R5508. He survived due to the German fighters running out of fuel, and lack of daylight.[14] 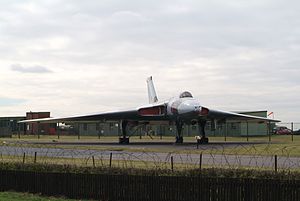 In the Cold War, RAF Waddington became an Avro Vulcan V-bomber bomber base, with 83 Sqn being the first in the RAF to receive the Vulcan in May 1957. It continued in this role until 1984 when the last Vulcan squadron, No. 50, disbanded. From 1968, the UK nuclear deterrent was transferred to Polaris submarines, starting with HMS Resolution.

The fiftieth anniversary of the RAF was celebrated at the base on 1 April 1968, mainly because the RAF's last flying Lancaster was based at the airfield from the mid-1960s until 1970, when moved temporarily to Hendon.

Operation Black Buck involved aircraft (three) and crews from the base (44 Sqn, 50 Sqn and 101 Sqn) for a bombing raid on Port Stanley airfield. The three Vulcan B2s were twenty-two years old, and were selected for their more powerful Olympus 301 engines. The complicated refuelling plan (14 Victor tankers) was only contemplated due to the belief of Sir Michael Beetham, then Chief of the Air Staff. Spare parts for the operation were requisitioned from scrapyards in Newark-on-Trent and military museums. Navigation came from the Delco Carousel inertial navigation system, never used previously by the RAF.[citation needed] 44 Squadron left on 21 December 1982.[13]

Later during 1982, there was a female peace camp outside the base for five months. At the beginning of 1982, the base had been designated to be closed, when the Vulcans would have left.[citation needed]

Tactical Fighter Meet 86 was held at the base in August 1986, which used RAF Spadeadam as a practice target.[citation needed]

Avro Vulcan XM607 which was stationed at RAF Waddington, is one of three Vulcans' (XM597, XM598, XM607) which took part in Operation Black Buck raids between April–June 1982, captained by pilots Flight Lieutenant Martin Withers DFC (on mission 1 and 7) and by Squadron Leader John Reeve (on mission 2).[27] In 1984, XM607 along with all Vulcans' was retired from active service, and remained preserved as the gate guardian at RAF Waddington.[27] In 1993 the only RAF Avro Vulcan bomber maintained by RAF Waddington for flying displays, serialled XH558, was retired due to budget restraints to Bruntingthorpe Aerodrome, Leicestershire. This aircraft returned to display flying following refurbishment and was the only airworthy Avro Vulcan example, operated by the Vulcan to the Sky Trust as a display aircraft, before retiring from flight in October 2015.

In the mid-1980s the base became home to a few NATO AWACS aircraft operating from their main base (with eighteen AWACS planes) at NATO Air Base Geilenkirchen in North Rhine-Westphalia on the Germany-Dutch border. The RAF used these aircraft until it had bought its own AWACS fleet, which were due to enter service in 1991.[citation needed]

During the 1991 Gulf War, American casualties were ferried through the base to the USAF Nocton Hall military hospital. The Electronic Warfare Operational Support Element (EWOSE - now known as the Air Warfare Centre) moved from RAF Wyton to Waddington in March 1995.[citation needed]

The base is the RAF’s Intelligence Surveillance Target Acquisition and Reconnaissance (ISTAR) hub and is home to a fleet of aircraft composed of Sentry AEW1, Sentinel R1, Shadow R1, RC-135W Rivet Joint and operating base for the RAF's MQ-9 Reaper. The station is also home to No. 34 Expeditionary Air Wing.

There is an outdoor viewing area east of the A15 road close to the northern end of the long runway which was designed to accommodate V bombers. Short-term visits from different NATO and Swiss fighter squadrons, in the past, used to generate occasional additional noise and interest because the airfield was conveniently placed for offshore practice firing ranges above the North Sea. However, with the closure of the aforementioned Air Combat Manoeuvring Instrumentation range these visits have ceased. Waddington also has a very active Force Development ethos, putting emphasis on the development of its busy personnel.

No. 34 Expeditionary Air Wing was formed at Waddington on 1 April 2006 encompassing most of the non-formed unit personnel on station. The EAW does not include the flying units at the station. The station commander is dual-hatted as the commander of the wing.

RAF Waddington Voluntary Band is one of seven voluntary bands within the RAF and is proud to serve the station and the surrounding areas. Members of the band include RAF personnel as a second duty, dependants, civil servants and local civilians. As part of the station's musical heritage, Pink Floyd performed at the station's Raven Club on 20 April 1968. 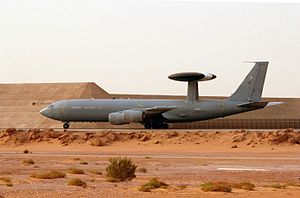 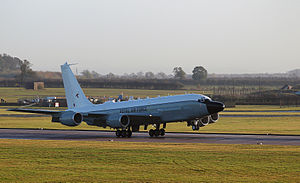 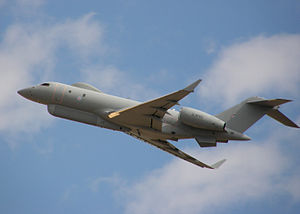 The RAF Waddington structure as of October 2014 is as follows:[29]

The first RAF Waddington International Air Show was staged at RAF Waddington in 1995, after the event was moved down from RAF Finningley - an RAF station located east of Doncaster (now Robin Hood Airport Doncaster Sheffield) which was closed down in 1995. Since then the RAF Waddington International Air Show has developed into the largest of all Royal Air Force air shows. It regularly takes place on the first weekend in July, attracting over 140,000 visitors and representatives of Air Forces from all round the world. The main purpose of the show is to raise public awareness and understanding of the RAF and its role today. 85% of all proceeds from the event are distributed to the two main Service charities; the RAF Benevolent Fund and the RAF Association; the remaining 15% is donated to local worthy causes. Since the inaugural year 1995 the Air Show has raised over £2,700,000 for Service and local charities. 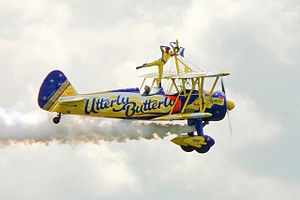 Wing walking on a Boeing-Stearman Model 75 in July 2005

The 2010 Air Show took place over the weekend of 3 and 4 July. The main themes being 90 years since the first ever RAF air show, at RAF Hendon, 70th anniversary of the Battle of Britain and 35 years of Airborne Early Warning. The flying display included Vulcan XH558, many regular exhibitors and aircraft but also display teams that had never been to Waddington before, including the Turkish Stars and the Czech Saab JAS 39 Gripen and Alca L-159 display.

The 2011 Air Show took place on 2 and 3 July, with the theme of Air Power - Past, Present and Future. Several indoor and outdoor exhibitions reflected this theme, including a new audio-visual experience in the main exhibition hangar. Visitors learned about the RAF's current operations abroad, the RAF's equipment and the RAF's personnel, devoted to their roles within the Royal Air Force. The USAF Display Team, The Thunderbirds, also took part. Displays included the Red Arrows, Team Viper, Belgian F16 solo, Avro Vulcan XH558 and the Royal Jordanian Falcons as well as many others.

The 2012 (30 June/ 1 July 2012) airshow attracted over 130,000 visitors to RAF Waddington from across the UK and beyond. Celebrating 100 years of the Central Flying School, Combat ISTAR and the Year of Lincolnshire Aviation the airshow had over 210 aircraft on display. Twenty countries took part in the event, with the first appearance in the UK by a RAAF Boeing Wedgetail and the debut appearance in Europe by the Republic of Korea Black Eagles display team. The team took the best flying display award. 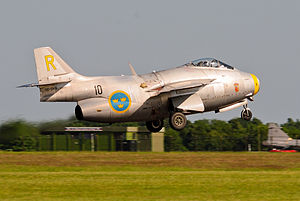 The 2013 airshow was held over 6 and 7 July 2013 at RAF Waddington and celebrated the 95th Anniversary of the Royal Air Force. The airshow also commemorated 70yrs since the historic and daring raids on the German dams of WW2, the 100th Anniversary of RAF Waddington's own 5(AC) Squadron and looked into the secretive world of ISTAR. Over 150,000 visitors attended the show in 2013, making it the biggest and best attended military airshow in the UK. The show featured the only display in the UK by the Turkish Air Forces Solo Türk F-16 demo as well as participation from the Netherlands, Belgium, Poland, France, Italy, Jordan, Czech Republic and many more. The show also featured the SAAB JAS37 Viggen.

In 2002, the half-hour ITV programme Airbase documented life at the airfield. Elizabeth Simmonds, the Olympic swimmer, trained at the base's pool.