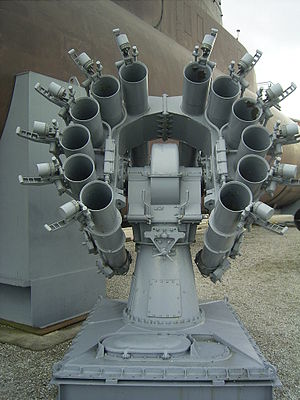 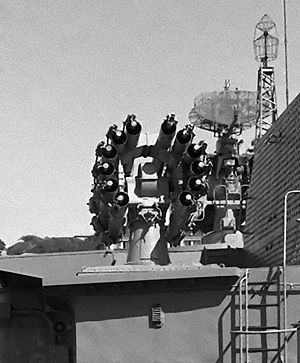 A RBU-6000 rocket launcher aboard a Udaloy class destroyer. 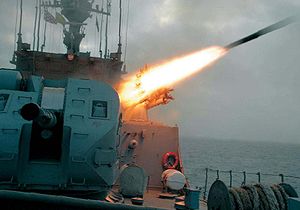 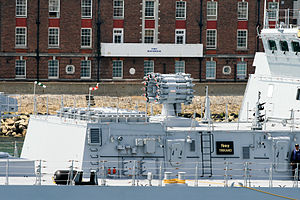 INS Trikand, completed 2013, with its RBU-6000 launcher and BrahMos VLS, visiting Portsmouth, UK, on its delivery voyage from St Petersburg.

The RBU-6000 Smerch-2 (Реактивно-Бомбовая Установка, Reaktivno-Bombovaja Ustanovka; reaction engine-bomb installation & Смерч; waterspout) is a 213 mm caliber Soviet anti-submarine rocket launcher. It is similar in principle to the Royal Navy Hedgehog system used during the Second World War. The system entered service in 1960-61 and is fitted to a wide range of Russian surface vessels. It consists of a horseshoe shaped arrangement of twelve launch barrels, that are remotely directed by the Burya fire control system (that can also control the shorter ranged RBU-1000). It fires RGB-60 unguided depth charges. The rockets are normally fired in salvos of 1, 2, 4, 8 or 12 rounds. Reloading is automatic, with individual rounds being fed into the launcher by the 60UP loading system from a below deck magazine. Typical magazine capacity is either 72 or 96 rounds per launcher. It can also be used as a shore bombardment system.

The RPK-8 system is an upgrade of the RBU-6000 system, firing the 90R rocket, which is actively guided in the water. This allows it to home in on targets at depths of up to 1,000 meters. The warhead is a 19.5 kg shaped charge, which enables it to punch through the hulls of submarines. It can also be used against divers and torpedoes. System response time is reported to be 15 seconds and a single-salvo has a kill probability of 0.8.

RBU-6000 were the most widespread anti-submarine rocket launchers in the Soviet Navy, used on many ship classes.