From Infogalactic: the planetary knowledge core
(Redirected from RM-70)
Jump to: navigation, search

RM-70 was developed in Czechoslovakia as a successor for the RM-51, achieving initial operational capability with its Army in 1972. The launcher was being produced in Dubnica nad Váhom (Slovakia). Originally, it was sold to East Germany. After the Soviet Union collapse and the split of Czechoslovakia into the Czech Republic and Slovak Republic, it was sold to several states in Africa, America, Asia and Europe.

RM-70 replaced the Ural-375D 6x6 truck by a Tatra T813 "Kolos" 8x8 truck as carrier platform for the 40-round launcher. The new carrier vehicle provides enough space for carrying 40 additional 122mm rockets pack for reload. Nevertheless, RM-70 performance remains near the same as Grad even in terms of vehicle's speed and range. This rocket launcher can fire both individual rounds and volleys, principally by means of indirect fire. It is designed for concentrated fire coverage of large areas (up to 3 hectares in one volley) by high explosive fragmentation shells. The fire is robust with almost 256 kg of explosives used in one volley of 40 rockets. The rockets used are either the original Soviet 9M22 and 9M28, or locally developed models. These are the JROF with a range of 20.75 km, the JROF-K with a range of 11 km, the "Trnovnik" with 63 HEAT-bomblets and with a range of 17.5 km, the "Kuš" with five PPMI-S1 anti-personnel mines or the "Krizhna-R" with 4 anti-tank mines PTMI-D and with a range of 19,450 m.

The vehicle is provided with a central tyre pressure regulation system (to allow its adaptation to the nature of the traversed ground), a headlight with white light on the forward cab roof and, if necessary, with a snow plough SSP 1000 or a dozer blade BZ-T to arrange its own emplacement or to remove obstacles. 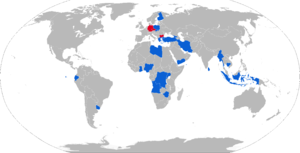 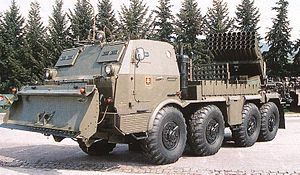 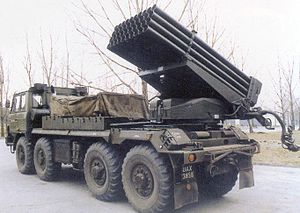 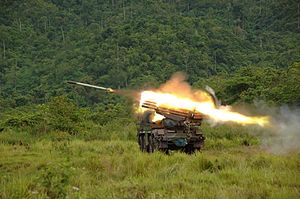