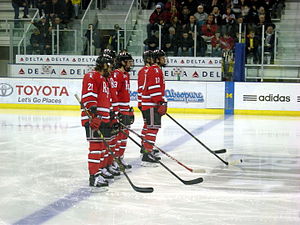 The RPI starting lineup before a November 2014 game against Michigan

Men's ice hockey at RPI dates back to 1901 and is one of the oldest programs in the country.[3] The team played as an independent NCAA Division I team from its inception in 1901 through 1938.[3] The team resumed after World War II for the 1949–50 season and in the following season Rensselaer joined Clarkson, Colgate, Middlebury, St. Lawrence, and Williams to form the Tri-State League for the 1950–51 season.[3] The next three seasons, 1952–1954 team won the Tri-State League season championships. RPI's first NCAA Tournament berth in 1953, coming in third and the following season, in 1954, the team won its first NCAA Men's Division I Ice Hockey Championship.[3] After a 6-year drought the program again made the NCAA Tournament in 1961, finishing 4th.[3] The 1960–61 season would be the last season RPI competed in the Tri-State League as RPI and fellow Tri-State League members Clarkson and St. Lawrence, joined the new ECAC Hockey League.[4]

Depending on how the rules are interpreted, the RPI men's ice hockey team may have the longest winning streak on record for a Division I team; in the 1984–85 season it went undefeated for 30 games, but one game was against the University of Toronto, a non-NCAA team. Continuing into the 1985–86 season, RPI continued undefeated over 38 games, including two wins over Toronto.[5] Adam Oates and Daren Puppa, two players during that time, both went on to become stars in the NHL. Joe Juneau, who played from 1987 to 1991, also spent many years in the NHL. Graeme Townshend who also played in the late 1980s, had a brief NHL career. He is the first person of Jamaican ancestry to play in the National Hockey League.

The hockey team plays a significant role in the campus's culture, drawing thousands of fans each week to the Houston Field House during the season. The team's popularity even sparked the tradition of the hockey line, where students lined up for season tickets months in advance of the on-sale date. Today, the line generally begins a week or more before ticket sales.[6] Another tradition since 1978 has been the "Big Red Freakout!" game held close to the first weekend of February. Fans usually dress in the schools colors Red and White, and gifts such as tee-shirts are distributed en masse. In hockey the school's biggest rival has always been the upstate engineering school Clarkson University.

The official nickname of some of the school's Division III teams was changed in 1995 from the Engineers to the Red Hawks. However the hockey, football, cross-country, tennis, and track and field teams all chose to retain the Engineers name. The Red Hawks name was, at the time, very unpopular among the student body; a Red Hawk mascot was frequently taunted with thrown concessions and chants of "kill the chicken!" In contrast, the official hockey mascot known as The Puckman has always been very popular. The Puckman is an anthropomorphic hockey puck with an engineer's helmet.