From Infogalactic: the planetary knowledge core
Jump to: navigation, search
For the volcanic caldera within which Rabaul lies, see Rabaul caldera.

During the eruption, ash was sent thousands of metres into the air and the subsequent rain of ash caused 80% of the buildings in Rabaul to collapse. After the eruption the capital was moved to Kokopo, about 20 kilometres (12 mi) away. Rabaul is continually threatened by volcanic activity due to having been built on the edge of Rabaul caldera, a flooded caldera of a large pyroclastic shield.

During World War II it was captured by the Japanese in 1942, and it became the main base of Japanese military and naval activity in the South Pacific. Settlements and military installations around the edge of the caldera are often collectively referred to as Rabaul despite the old town of Rabaul itself being reduced to practical insignificance by the volcanic eruption in 1994.

As a tourist destination, Rabaul is popular for its volcanoes, scuba diving and for snorkelling sites, spectacular harbour and other scenery, World War II history, flora and fauna, and, of course, the fascinating and colourful cultural life of the Tolai people. Before the 1994 eruption, Rabaul was a popular commercial and recreational boating destination; fewer private small craft visit now, but 10-12 cruise ships visit Rabaul each year, including the Queen Elizabeth carrying up to 5000 passengers. Tourism is a major industry in Rabaul and East New Britain generally.

Rabaul's proximity to its volcanoes has always been a source of concern. In 1878 before it was established as a town an eruption caused the formation of a volcano in the harbour. 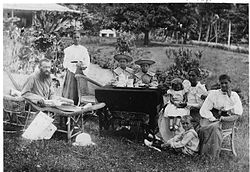 In 1910 the German colonial government during the administration of Governor Albert Hahl moved offices, the district court, a hospital and customs and postal facilities from Herbertshöhe (today’s Kokopo) to Simpsonhafen. That settlement was thus substantially enlarged with official buildings and housing and renamed Rabaul, meaning mangrove in Kuanua (the local language) as the new town was partially built on a reclaimed mangrove swamp.[2]

At the outset of World War I, at the behest of Great Britain, Australia — as one of the Dominions of the British Empire — defeated the German military garrison in Rabaul and occupied the territory with the volunteer Australian Naval and Military Expeditionary Force. Following Germany's defeat at the end of the war, the occupied territory was delegated in 1920 to Australia as a League of Nations Mandate (Class C).[3] Rabaul became the capital of the Territory of New Guinea. Visits to and stays in Rabaul during this period were amply described in books by many authors, including Margaret Mead.

Gunantambu, the famous house of “Queen” Emma Forsayth and her husband, contained furniture previously owned by Robert Louis Stevenson and left to her family in Samoa.[4] Destroyed in the 1937 volcano eruption, its remains became a tourist attraction after World War II and remained so until the 1994 further volcanic destruction of Rabaul. 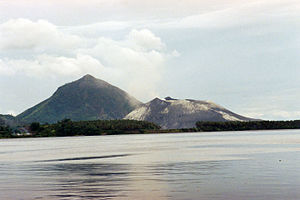 "Rabaul volcano is one of the most active and most dangerous volcanoes in Papua New Guinea."[5] Having erupted and entirely destroyed Rabaul in 1937, five years before the occupation by Japan, "Rabaul exploded violently [again] in 1994 and devastated the...[city]. Since then, the young cone Tavurvur located inside the caldera has been the site of near persistent activity in form of strombolian to vulcanian ash eruptions. The caldera has an elliptical form (14 x 9 km) and is surrounded by a steep volcanic ridge several hundred meters high."[5]

Under the Australian administration, Rabaul developed into a regional base. Then in 1937, catastrophic volcanic eruptions destroyed the town after the two volcanoes, Tavurvur and Vulcan, exploded. 507 people were killed, and there was widespread damage. Following this, the Australian administration for the Territory of New Guinea decided to move the territorial headquarters to the safer location of Lae. All long-term steps to re-establish the territorial headquarters at Rabaul were forestalled during World War II. 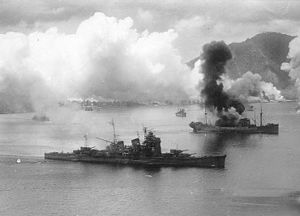 Aircraft of the USAAF 3rd Bomb Group attack Japanese ships in Simpson Harbor, 2 November 1943. The heavy cruiser Haguro is in the foreground. She had been damaged during the battle of Empress Augusta Bay the previous night. The burning transport at right appears to be one of the Hakone Maru class, of which Hakone Maru, Hakozaki Maru and Hakusan Maru were still afloat at the time. The ship in the left distance, partially hidden by smoke, appears to be the submarine tender Chogei or Jingei. 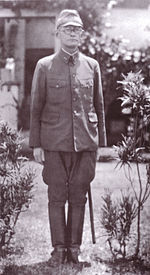 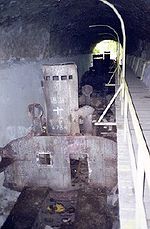 By the time the Japanese attacked Pearl Harbor it was apparent they would soon attack Rabaul. So, by December 1941, women and children (except for Chinese and the local indigenous) were evacuated. In January 1942 Rabaul was heavily bombed, on 23 January the Battle of Rabaul began and Rabaul was captured shortly thereafter[6] with the landing of thousands of Japanese naval landing forces.

During their occupation the Japanese developed Rabaul into a much more powerful base than the Australians had planned after the 1937 volcanic eruptions, with long term consequences for the town in the post-war period. The Japanese army dug many kilometres of tunnels as shelter from Allied air attacks, such as the bombing of Rabaul (November 1943). They also expanded the facilities by constructing army barracks and support structures. By 1943 there were about 110,000 Japanese troops based in Rabaul.

On 18 April 1943, Admiral Isoroku Yamamoto, the architect of the Japanese attack on Pearl Harbor, was shot down and killed by a United States P-38 Lightning over south Bougainville after taking off from Rabaul on an inspection tour. Japanese communications giving Yamamoto's flight itinerary were decrypted by United States Navy cryptographers, who passed on the information to operational units.[7] Sixteen United States Army Air Forces P-38 Lightning fighters took off from Guadalcanal and intercepted and destroyed the two bombers of the Yamamoto flight and damaged some of the escorting Japanese fighters.

Instead of capturing Rabaul during their advance towards the Japanese Home islands, the Allied forces decided to bypass it by establishing a ring of airfields and naval bases on the islands around it. Cut off from re-supply and under continual air attacks as part of Operation Cartwheel, the base became useless. The Pacification of Rabaul took until the end of the war and was only completed following the Japanese surrender in August 1945.[citation needed]

Despite it having been "nearly destroyed in 1937"[8] and it being questionable whether a regional civic centre should be reestablished on the site, it was re-established by the Japanese during their occupation and "after being rebuilt [once the Second World War had ended and the site was re-taken by Australia] Rabaul flourished as the principal city and port of the archipelago, with one of the finest harbors in the world."[8] By 1990 Rabaul's population was 17,044.[9] With British New Guinea, renamed Papua, and German New Guinea, continuing to be called New Guinea, returned to administration by Australia, however, Rabaul did not resume its pre-1937 role as capital, which Port Moresby became for the whole of the two territories. 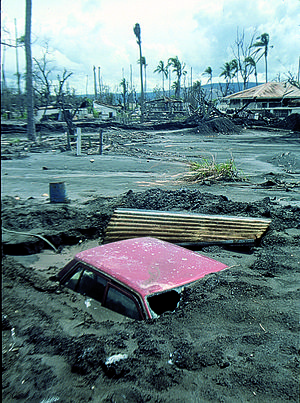 Aftermath of the 1994 volcanic eruption in Rabaul.

In 1983 and 1984 the town was ready for evacuation when the volcanoes started to heat up. Nothing happened until 19 September 1994, when again Tavurvur and Vulcan erupted, destroying the airport and covering most of the town with heavy ashfall. There were only 19 hours of warning but the city and most nearby villagers were evacuated before the eruption. Five people were killed—one of them by lightning from the eruptive column. The planning and evacuation drills helped keep the death toll low. Most of the buildings in the southeastern half of Rabaul collapsed due to the weight of ash on their roofs.

The last eruption and continuing low and modest levels of activity, prompted the relocation of the provincial capital to Kokopo, the former German Herbertshöhe. Nonetheless, Rabaul is slowly rebuilding in the danger zone. Vulcan has remained quiet since the 1994, but eruptions from Tavurvur, small and larger, occur intermittently with the most recent of note being on 29 August 2014. A government vulcanological observatory was established on the northern ridge of Rabaul caldera in the 1950s and with one of the most beautiful views in the world, a grandstand view across the town, harbor, and volcanoes. A team maintains its crucial watch over the town and the volcanoes today. It also has responsibility for monitoring other volcanoes on New Britain and nearby islands.

Rabaul Airport was destroyed in the 1994 eruption and since the approach involved flying over the Tavurvur crater, it was abandoned. The airport was in the direct path of the falling ash from the nearby vents. A new airport was built at Tokua, about 50 km farther away to the southeast. However, even it has been closed occasionally by ash thrown up by Tavurvur and driven by the North-west monsoon winds.

Rabaul has a large, nearly enclosed harbour, Simpson Harbour. Use of this harbour for the Imperial Japanese Navy was one of the motivations for the Japanese invasion in 1942.[citation needed]