From Infogalactic: the planetary knowledge core
Jump to: navigation, search
For other uses, see Racing (disambiguation). 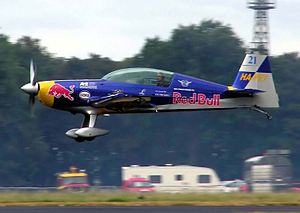 Air racing: Hungarian aerobatics pilot Peter Besenyei at speed in his Extra 300 at an air race in England 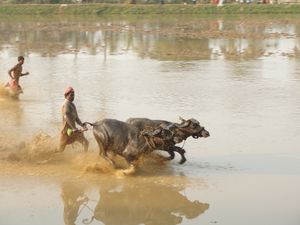 In sport, racing is a competition of speed, against an objective criterion, usually a clock or to a specific point. The competitors in a race try to complete a given task in the shortest amount of time. Typically this involves traversing some distance, but it can be any other task involving speed to reach a specific goal.

A race may be run continuously from start to finish or may be made of several segments called heats, stages or legs. A heat is usually run over the same course at different times. A stage is a shorter section of a much longer course or a time trial.

Early records of races are evident on pottery from ancient Greece, which depicted running men vying for first place. A chariot race is described in Homer's Iliad. 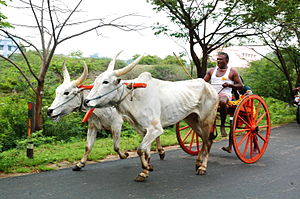 Running a distance is the most basic form of racing, but races may be conducted in vehicles, such as boats, cars, cycles and aircraft; or with animals such as horses or dogs. Other forms of racing are by skis, kicksled, skates or wheelchair. In a relay race members of a team take turns in racing parts of a circuit or performing a certain racing form.

A race can also involve any other type of goal like eating. A common race involving eating is a hot dog eating race, where contestants try to eat more hot dogs than the other racers.

Racing can also be done in more humoristic and entertaining ways such as the Sausage Race and the Red Bull Trolley Grand Prix. Racing can be entertained from around the world.

The word race comes from a Norse word.[1] This Norse word arrived in France during the invading of Normandy and gave the word raz which means "swift water" in Brittany, as in a mill race; it can be found in "Pointe du Raz" (the most western point of France, in Brittany), and "raz-de-marée" (tsunami). The word race to mean a "contest of speed" was first recorded in the 1510s.[2]

A race and its name are often associated with the place of origin, the means of transport and the distance of the race. As a couple of examples, see the Dakar Rally or the Athens Marathon. 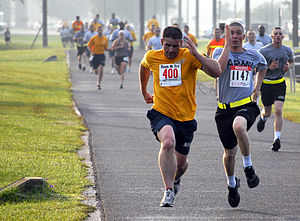 Two men engaging in a sprint finish at the end of a 5-kilometre road running competition.

A sprint finish is a racing tactic where a competitor accelerates towards top speed in the final stages of a race. This tactic is mostly associated with long-distance forms of running and cycling, which often feature large groups of competitors racing at a slower pace for much of the race – this slower aerobic racing allows for the subsequent anaerobic activity required for sprinting.[3] The tactic relies upon keeping greater energy reserves than your opponent until the last part of the race in order to be able to reach the finish point first. It is the opposing tactic to keeping a steady optimal pace throughout a race to maximise your energy efficiency (see running economy).[4]

In track and field, distances from 1500 metres upwards often feature sprint finishes. They can also be found in cross country and road running events, even up to the marathon distance. A runner's ability to sprint at the end of a race is also known as their finishing kick.[5] Multisport races, such as the triathlon, often have running as the final section and sprint finish tactics are applied as they are in running-only events.[6] 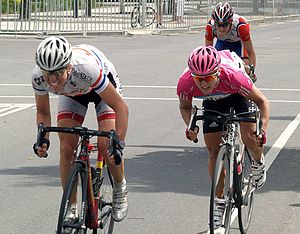 In cycling, sprint finishes are an integral part of the sport and are used in both track cyclings and road cycling. Cycling sprints are often highly tactical, with cyclists occasionally coming to a near halt at points before reaching a high speed finish.[7] The longer track races such as, scratch races, often feature sprint finishes as maintaining a steady pace within the peloton allows opponents to conserve energy through drafting.[8] Road races are similar in this respect, in both short criterium races and long-distance races. Sprint tactics also form a major part of points classifications in road events, where cycling sprinters specialise in reaching an intermediate point first, thus gaining extra points and resulting prizes.[9][10]

Sprint finish tactics are also used in speedskating, cross-country skiing, long-distance swimming,[11] horse racing and other animal racing sports.[12][13] The finishes of races which are outright sprinting events in themselves, such as the 100 metres track race, are not normally referred to as sprint finishes, as all competitors are already sprinting by default (thus it is not a racing tactic).